Stinging nettles are a common weed, tough weed to control. They spread from seed and from the roots so to control nettles you need to attack on both fronts. They prefer a a slightly acid, rich soil but will grow on any soil type – wet or dry, rich or poor. 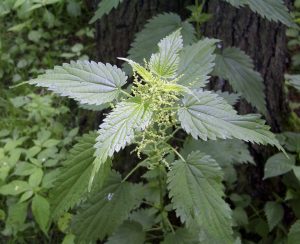 Stinging Nettle – Note the seeds it’s about to shed

Nettles do have some plus points, for a start they are essential for some butterfly species whose caterpillars feed on the nettle whilst protected from predators to a degree by the stings. The main butterfly species that use the nettle are: Peacock, Red Admiral, Painted Lady, Small Tortoiseshell and Comma.

Some people like to grow stinging nettles in pots in a border to attract and assist those attractive butterfly species but you need to be careful not to let them seed.

They’re not very useful, to encourage butterflies and other wildlife a bigger patch is more effective.

Yes, young stinging nettle shoots are edible (cooked) and some people actually like them. I’d not place them in the delicacy division myself. It’s amazing what human beings can eat when pushed.

Like most plants, they have their place – just not all over my garden, thanks!

Nettle roots can go down fairly deep as they extract their nutrients from the soil. It’s a shame to waste that pirate’s chest. By converting nettles to fertiliser you get the benefit of that chest and eventually weaken and kill the weed.

Take shears, sickle or scythe to nettle patch, cutting them as near to the ground as you can. Gloves and long sleeved shirt are a good idea unless you’re immune to pain. Collect the cut and cram into a barrel, fill with water and leave.

The liquid will get smelly but not as bad as comfrey tea! Basically use as a liquid fertiliser instead of just watering. Particularly good for brassicas and sweetcorn who need a lot of nitrogen.

By the time your first batch of nettle tea is ready, your stinging nettle patch will be in full growth again. Take another cut. You can add to the barrel and top up with water or use this cut on the compost heap so long as there are no seeds.

Three or four cuts a year for a year or two will kill most nettle patches off.

Killing off stinging nettles that are growing up from windblown seeds is a matter of hoeing them off before they get properly established. A sharp hoe, just under the surface and flick so they don’t get chance to re-root.

With an established patch, a bigger task awaits you. Cut the foliage down and compost it unless it’s seeding. If seeding make nettle tea or burn them because, unless you have a really good hot compost heap, it will be a nettle patch in short order.

Next fork over the soil and remove all the yellow nettle roots you can see. I mean every bit. Burn or drown the roots as nettles will grow back from even a small piece of root. Leave the patch for a month and you’ll see new nettles springing up from the bits you missed. Repeat the digging and root removal.

Nettles prefer an acid soil and liming to a PH above 5.5 or 6.0 seems to really slow them down if not stop them.

Because they spring back from the roots, killing the foliage alone is ineffective way to eradicate nettles. You need a systemic herbicide – that is a weedkiller that is absorbed by the leaves and taken down to the roots.

Unfortunately the only effective systemic weedkiller available is likely to be glyphosate based which has had a lot of adverse reports regarding it’s safety and environmental friendliness. Even glyphosate may need 4 applications to kill off an established patch of stinging nettles

Previously ammonium sulphamate would be effective against stinging nettles but this is no longer licensed although it has no reported safety concerns.