How to control bracken and safely compost bracken, despite the cancer risk of bracken which contains the carcinogen (ptaquiloside). 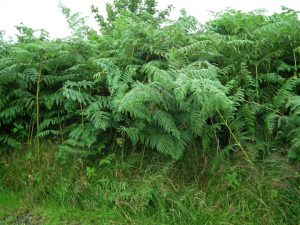 Bracken is a noxious weed that can be found on every continent except Antartica. It is mostly found in upland areas and areas of poor acidic soil although, if allowed, it will grow almost anywhere.

Bracken has been shown to cause stomach cancer in cattle and horses and has been implicated in causing cancer in humans. Experiments have also shown the spores cause cancer in mice and so are assumed to be carcinogens for humans.

The various studies that have implicated bracken as a cause of gastric cancer in humans suggest that it is not just direct consumption of bracken that carries a risk but also consumption of dairy products especially in childhood where the cattle have eaten a significant amount of bracken.

The cancer causing chemical contained in bracken has been identified as ptaquiloside.

Most animals will not eat bracken unless there is a shortage of their usual foods. As well as being a carcinogen causing stomach cancer, bracken can cause Vitamin B deficiency and urinary bladder neoplasms. Acute bracken poisoning causes a haemorrhagic syndrome resulting in some cases in sudden death.

Estimates of land covered in bracken vary but range from 2,500 km2 upwards to 9,750 km2 in the UK, although large areas of bracken are mostly concentrated in Wales and Scotland. Even at the lowest estimates, bracken is a huge problem as it will encroach into farmland, gardens and allotments preventing growing and the keeping of livestock.

It spreads by means of underground roots that pop up new fronds in much the same way as horsetail or bindweed. It can also spread from spores. Bracken dies back in winter and comes to life in late spring with new fronds shooting up from the root system.

There are chemical controls available to licensed operatives which are generally used when clearing hectares of bracken from moorlands etc. The gardener will find that they are effectively limited to various herbicides based on Glyphosate which may well be banned in the future as evidence comes to light of its environmental and health effects.

Non-chemical controls are basically digging, crushing, burning and cutting. Digging is not really an option as the labour involved is large and the roots can go down a metre in some soils. A traditional control was to run pigs on bracken who would root up and eat the roots. I expect the carcinogenic effects were not a problem as the pigs would be gone to market prior to cancer developing.

Crushing, particularly of young fronds, is effective but it is hard work. Large areas in difficult terrain are crushed with horse-drawn rollers but in the garden either a heavy lawn roller (no longer a common item) or trampling by foot can be used. Studies have shown that bracken is basically stopped from growing in grass fields where cattle are kept as they trample it down. Sheep also slow it down but are not as effective.

Controlled burning when the bracken has died back leaving dry fronds behind has been used but the results are patchy due to the roots being deep in the insulating soil.

Cutting is probably the most effective realistic control available to the gardener apart from chemicals. Control is not, however, elimination. To get rid of bracken completely by cutting can take a number of years.

Ideally the bracken should be cut three times in the season. A scythe or a brushcutter are best for all but the smallest areas. If limited to just one cut, this is best undertaken in mid to late July as the regrowth will be open to early frost damage. Eventually the root system will weaken and die but with a single cut per annum this could take 10 years.

Warning. Since there is strong evidence that the spores are carcinogens, cutting bracken when it is producing spores carries an element of risk. Information is conflicting, some states that bracken produces its spores in late high summer, basically August in the UK but other sources state that bracken only rarely produces spores in hot years.

It would seem prudent to avoid cutting from late July to early September in the UK or at least to wear a decent dust mask (available from builders merchants).

You should also be aware that if sheep graze around or in bracken it is known for harbouring high numbers of sheep ticks which can transmit Lyme disease.

Bracken was traditionally a useful resource for hill and marginal land farmers. It was cut for livestock bedding for which it is a good material as it is highly absorbent and doesn’t compact badly. Eventually the animal manure would rot down the bracken which would be used on the land.

It was also used as a thatching material although most often for temporary animal shelters rather than housing. Dried bracken can also be used as fuel or at least as a fire starter. It actually contains more calorific energy than straw.

There has been discussion about using bracken as a mulching material but due to the potential risk from the cancer causing ptaquiloside, I wouldn’t feel totally happy using it like this.

Left to dry and burnt it will produce ash with a high level of potassium and a high pH which can be used as a fertiliser. Treat as wood ashes and keep dry until required. Burning will effectively destroy any ptaquiloside and the ashes are 100% safe.

The best use for a gardener is to hot compost bracken to produce either general compost for use in the garden or a potting compost, especially an ericaceous compost. First we need to consider the carcinogen problem but happily the Forestry Authority in Scotland have undertaken trials and performed tests that show that hot composting effectively destroys any ptaquiloside in just three weeks.

The Forestry Authority was composting larger amounts than the average gardener is likely to have and was able to achieve 55 to 60 degrees C just by having large piles of chopped bracken but the gardener will need to approach a little differently.

Mixing shredded bracken with an activator, whether this be fresh animal or poultry manure, comfrey or a high nitrogen fertiliser like urea or sulphate of ammonia should result in fast heating.

Once the pile has heated and begun to cool it should be moved to a new bin, rebuilding so the top is at the bottom and outside to the inside which should result in re-heating, effectively removing the ptaquiloside from all the bracken.