Couch grass is found all over the British Isles as well as much of the rest of the world from the Arctic to Africa. That spread and it’s toughness is why it has so many common names – twitch grass, scutch, wikens, quick grass, quitch, witchgrass, dog grass, quack grass and probably more. They all refer to Elymus repens. 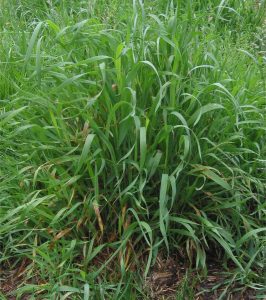 Giving it a name is a far cry from getting rid of one of the worst nuisance weeds we have to cope with. It’s a tough weed in the garden, Fast growing and spreading from creeping rhizomes that go along the ground putting down more and more roots.

Ripping it up does little good as it grows back from even small pieces of root. Even with the best care, digging it all out is well nigh impossible. Miss a bit of the thin white root and with the tenacity of The Terminator it will be back!

The standard method for controlling couch grass is to spray with a systemic herbicide such as glyphosate  that will be absorbed by the leaves and then taken down to the roots, killing the weed completely.

Organic controls consist of digging out as far as possible and then covering with a light excluding mulch or mat. Commonly recommended is to cover the ground with cardboard and then 5cm of wood chippings – putting the ground out of action for months.

Digging out followed by frequent hoeing or flaming to wear out the weed is also suggested. The problem is that it’s back if you miss a few weeks.

Henry’s gardening tip is as follows:

If wish to clear Couch Grass from your plot completely, plant the troubled area with turnip seed

The two will not mix and the couch will wither back and die. Even if you have cleared the grass it may come back if you have not removed every single root. So to keep it at bay give this a try. I promise you it will work. A lot of allotment plot holders know this trick, but a great many others may not have heard of it.

I’ve not tried it but it’s possible it does work.