Growing Sage – How to Grow Sage

How to Grow Sage – A Guide to Growing Sage 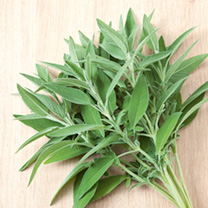 Sage was used as a medicinal herb by the Romans and even today there are claims that it enhances memory performance and even claims it is helpful in treating the symptoms of Alzheimer’s Disease. It is best known as a culinary herb and everyone knows the distinctive flavour of sage from sage & onion stuffing.

Sage is very easy to propagate from cuttings. It’s usually obtained as a pot-grown plant rather than seed.

Pot grown plants can be planted out at any time of the year. Ensure they’ve enough water if planting out in summer. Having said that, sage prefers to be dry and will not tolerate being water logged for long. In heavy soils break up the base of the planting hole and add some gravel or sharp sand to ensure good drainage.

After three or four years you may find the plant aging and the strength of flavour deteriorating. Just take some cuttings and start new plants to replace the old,

There are several different varieties of sage, including purple sage (with lovely coloured leaves), variegated leaf types and tangerine, pineapple and blackcurrant sages which have more of the scent than the flavour of those fruits.

Sage Icterina has a wonderful golden green foliage with pale blue flowers in summer but is still a good culinary cultivar.

One of the best culinary sages for pot growing is Sage Nazareth with its elongated silvery leaves. It’s not only compact but striking to look at and will grace any patio in a pot.

Sage can be frozen or dried but it’s best used fresh and as the common sage is hardy and generally evergreen, it is available all year round for a step into the garden.

Sage is often used with fatty meats and is said to aid digestion. Sage and onion stuffing is a favourite.

Sage tea is easily made by steeping a few leaves in boiling water for five minutes. It is said to sooth and boost memory.

Try frying the leaves in oil for a few minutes, before adding the onions, etc, when making soup. Remove and reserve the sage leaves before adding the rest of the soup ingredients. The frying imparts the flavour into the oil and the fried leaves can be used as garnish on serving.