I never thought about taking on a greenhouse as being like taking on a pet until I read this article.

Once you have a greenhouse, you will need to use it properly to get the best from it and this article gives some good guidance on using the greenhouse. 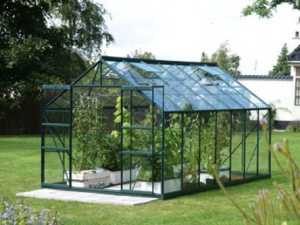 The successful management of a hobby greenhouse depends upon following simple rules regularly and applying common sense. A greenhouse is a responsibility rather like a dog or cat, for no day goes by without its inhabitants demanding some attention.

Regular watering may seem obvious, but it is surprising how many gardeners water when they have to, to the detriment of the plants. Good stable growth can never be achieved by irregular watering.

A humid atmosphere is beneficial, especially during the summer months. Regular spraying of the path and gravel under the benches helps. Avoid getting water on the foliage of plants during hot sunny weather. The droplets of water serve as small magnifying glasses during bright sunshine and the leaf tissue beneath becomes scorched.

During the late spring and peak summer period the greenhouse must be provided with some kind of shading. Roller blinds are expensive, but very effective, although most of the sun shade products that are mixed with water and applied with a brush are equally functional, if not as visually pleasing.

Ventilation should be applied freely during warm weather and moderately during cooler periods. The free circulation of air amongst plants helps to reduce the incidence of common fungal diseases like botrytis.

During the duller days of winter and early spring ensure that maximum light is admitted to the greenhouse. Clean the glass in the fall and then again during early spring. Cleanliness is important in all parts of the structure if pests and diseases are to be successfully controlled. The thorough cleaning of the rafters, brickwork and other fixtures during the winter with a strong garden disinfectant will pay dividends.

Dead leaves and discarded plants should be disposed of regularly and should not be allowed to accumulate beneath the staging where they will harbour pests and diseases. Regular cleaning and maintenance results in healthy plants and a trouble-free structure in which to produce them.

One of the on-going activities in a well managed greenhouse is re-potting. This applies to all permanent plants and those that are growing on and need periodic removal to a larger pot size. Some flowering plants like pot chrysanthemums and primulas are completely exhausted after flowering and are best discarded rather than re-potted. They rarely regain their former glory.

Re-potting often causes some consternation, particularly to new gardeners, for there is believed to be a certain mystique surrounding the operation and an uncertainty as to when to perform it. It is obviously better to re-pot a plant just before it needs it, but the beginner may have difficulty in recognizing just when that is, so plants are often allowed to go beyond that point and start to deteriorate.

Paleness of foliage and gaunt appearance is the overall aspect of a plant that is in need of re-potting. The pot-ball will be hard and congested, often with roots pushing out through the drainage holes of the pot. The compost surface will also probably have a stale look about it heightened by the presence of mosses or liverworts.

When re-potted, pot-bound plants rapidly recover from their ordeal, but it is better to catch them before they go into decline so that strong healthy growth can continue unchecked. During the active growing period do not be frightened to turn a plant out of its pot and inspect the root-ball. There is no need to pull it about, but a regular inspection will indicate whether everything is in good order.

Do not pay too much regard to the concentrated presence of roots towards the sides of the pot, for it is quite natural for them to gravitate there. It is not necessarily an indication that the plant must be re-potted. Similarly roots that push through the drainage holes may not always indicate congestion within the pot, for if the pot has been stood on a gravel tray in moist conditions it is quite normal for roots to probe around outside.

The best way to tell whether a plant needs re-potting is to pinch the root-ball with your fingers. If there is any flexibility in the compost it shows that the pot-ball has not been completely ramified by roots and therefore nothing need yet be done.

If the root-ball feels hard and solid, then re-potting is clearly a matter of priority. Re-potting is also necessary if you spot tiny flies jumping around on the surface of the compost. These are feeding on decomposing organic matter in a compost that has passed its useful life. They disappear immediately after re-potting.

Most greenhouse plants need feeding if they are to give of their best. This is most effective when they are in active growth, either immediately after they have started to sprout or following the formation of flower buds.

The feeding program is different for individual plant types, but the exact rates that should be used will be found on the containers of modern proprietary plant foods. The levels of nitrate, phosphate and potash are also noted, so that a suitable feed can be chosen depending upon whether it is to be directed to fruit and flower production or foliage and root development.

It is important to introduce a general spraying program to the greenhouse. Irrespective of the plants being grown, insect pests and fungal diseases will appear. Check carefully that the fungicide and insecticide mix so that you can spray in one go. Instructions will be clearly stated on the package. These will also indicate any plant sensitivity to the product.

Systemic pesticides are the only ones that can be used for such a spraying program. These are absorbed by the foliage, taken into the sap stream of the plant and serve as an inoculation. To maintain the protection, spraying will be required every three weeks or so. There are certain pests and diseases that are not controlled effectively by systemic products and these need dealing with individually with contact pesticides.

About the author: Philip Swindells has over 40 years gardening experience. A former botanical garden curator and an international horticultural consultant, he has worked extensively in the UK, North America, the Middle East and Australia. The Author of more than 50 gardening books, he has been awarded a Quill and Trowel Award by the Garden Writers’ Association of America. He is also a former UK Garden Writer of the Year.