This revolutionary indoor greenhouse is a growing cabinet makes use of the dewpoint principle – the principle is that air saturated with water vapour cools around the leaves of cuttings and plants. Moisture loss from leaves is eliminated encouraging healthy root growth. However, the leaf surface remains dry preventing moulds. 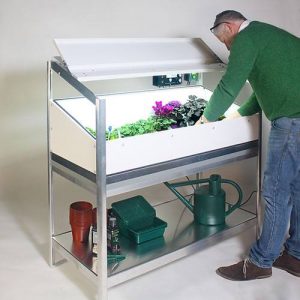 The Dewpoint Cabinet is a completely self-contained unit only requiring connection to mains electricity. It will provide the ideal environment for the germination of seeds & the fast rooting of cuttings. It can be run continuously – throughout the year if required – & needs only the minimum of maintenance.

The principle of the Dewpoint (which is protected by patent no. 1341958) is that fresh air saturated with water vapour is allowed to cool round the leaves of cuttings & plants, never allowing them to dry out; thus encouraging healthy root growth.

The Dewpoint Cabinet measures approximately 48” long by 22½” wide & will accommodate six standard seed trays. A thermostatically controlled heating tray warms a reservoir of water through which is pumped fresh air which becomes saturated. Just above the water reservoir is a mesh onto which the subjects are placed. The thin aluminium sides of the cabinet cool the air producing ‘the dewpoint’ – condensation on the sides runs back into the reservoir.

The top of the cabinet is sealed with a lighting hood which contains two 55 watt colour 86 daylight fluorescent tubes. All the electrical equipment is run through a time clock that allows you to set ‘artificial nights’ as well as ‘days’. When the clock is off a small amount of power is fed to the heating tray to maintain the dewpoint.

The Dewpoint Cabinet will work anywhere under cover where the temperature does not become excessive – a garage, cellar or box room are quite suitable but not a greenhouse or conservatory.

The Dewpoint Cabinet is supplied in kit form with detailed assembly instructions although you may prefer a qualified electrician to make the final electrical connections. The lighting lid simply lifts up allowing clear access – to fill the water reservoir & position your seed trays. Then plug in, set the time clock & leave the rest to the Cabinet. About every two weeks check the water needs – it may be necessary to soak the seed trays.

In the Dewpoint Cabinet plants have no means of telling what season or time of day it is so, for example, heather cuttings frequently flower one or two months after they are taken & seed may be started into rapid growth at any time. For woody plants the lights can be left on 24 hours a day, whereas for soft plants such as Saintpaulias, Orchids & Tomatoes should have at least 8 hours of darkness for best growth.

To sum up, with the Dewpoint Cabinet:

You can find more on the Dewpoint Cabinet here

COMMENTS ON THE DEWPOINT GROWING CABINET

The following was written by Don Richards, the inventor of the ‘Dewpoint Cabinet’ – we hope you’ll find his comments on his experiences interesting.

We gardeners tend to specialize and though I know a bit about heathers I have never won a prize for vegetables. Perhaps the fullest use will be made of the Dewpoint Cabinet by following the thinking behind it.

Working long hours as the village chemist my hobby was a garden with more than an acre of heather planted in great variety. With rather lax morals they bred freely and the commonest weeds were always more heathers!

Nearly all were rubbish, but now and then a potential winner appears. Before telling the registrar it needs to be evaluated, and for that several plants are needed, but I have no spare time.

Mist was looked at and costed carefully. For commercial growers producing thousands of easily rooted plants it would be the answer but there are snags:

Other commercial propagators to be used in a greenhouse had been tried but new cuttings stand little chance with the wild fluctuations of temperature. Although some look quite impressive a plastic bag can do anything that they can do. I was not prepared to risk my marriage leaving my wife to take the necessary action whenever the weather changed – there must be another way.

Elaborate controls are only cost effective in a large commercial greenhouse so I would start with a low baseline in a cellar and add light, a little heat and a stream of air saturated in water vapour. The basic principle patented was to saturate the air with warm water vapour and then cool it slightly, as it does in the top of the cabinet.

Drying out, the usual cause of death for cuttings, was avoided.

Problems were expected in growing plants under such novel conditions, especially from moulds but there were just no problems. I suspect that the spores are trapped in the film of moisture on the walls and are washed down into the reservoir beneath. Spore and other infections that might be pumped in with the air are similarly trapped. In fact the slight positive pressure in the cabinet prevents invasion as in the best operating theatres!

This led to Dewpoint Cabinets being used for weaning minute young plants. In micro culture and specialised orchid culture from seed they are grown in sterile agar media in the same way that bacteria are cultivated. These processes enable commercial quantities of new varieties to be available in a fraction of the time. Initially when they were first exposed to normal growing conditions they were lost to moulds and infections but Dewpoint Cabinets enabled almost 100% success.

Trouble was also expected when cuttings and seedlings were first exposed to drying outside. At first plants were put out on calm days and returned to the cabinet at night but as there was no wilting, more serious exposure was given. Even though plants had not needed to do it before, ample moisture was pushed into the foliage, but there was a curious effect if they were returned. The plant could not turn off the flow of sap so quickly and leaves would ‘weep’. In some thin leaved plants like fuchsias a row of cells near the edge of the leaves would burst but otherwise no damage was done.

Cuttings that have rooted quickly can go straight out if temperatures are reasonable but leaves grown in artificial light, either in the cabinet or growing rooms have never been exposed to ultra-violet light and may be damaged.

Plants with thick leathery leaves are safe enough but those with thin or tiny leaves (as heathers) can be damaged by sunlight. A handful of grass thrown over them is usually enough and by the time it dries and blows away they can take care of themselves.

The light, warmth and humidity have proved useful to other interests. One customer found it perfect accommodation for his pet snake and it is obviously useful as a vivarium. By fitting a more accurate thermostat another used his for hatching eggs. Without the lights it can also be used for checking electrical circuits in maximum humidity.

Another found a particularly attractive seedling among his dahlias and was delighted with the speed he could increase his stock. He was so pleased that he offered his gardener’s services on our stand at Chelsea.

Many of the rhododendrons in my garden are the result of an early experiment. In the free distribution of surplus seed from the Royal Horticultural Society I got four species of rhod. They were grown and potted on in a Dewpoint Cabinet in a cellar in constant light. A little foliar feed was only given when they looked starved but after 9 months some were pushing against the glass. Taking them out I realised that most were ‘three years old’.

Trees and shrubs do not grow at a steady rate determined by the environment. In spring the terminal buds burst into rapid growth. This slows gradually during the summer then forms a larger terminal bud which remains dormant during the winter. The seedlings had nothing ‘to set their clocks by’ and were following an erratic cycle quite happily. I say ‘3 years old’ because on many were the collars of bud scales left as the terminal buds burst

Many plants fail to thrive without sleep. Tomatoes, lettuce, African Violets etc. slowly fail but I believe that woody plants and ferns grow more quickly and quite healthy in constant light. I would be very interested if anyone can demonstrate that this is wrong.