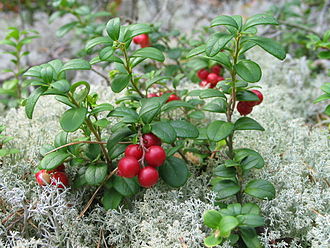 Lingonberries will grow successfully in the UK. They’re native to Scandinavia where they’re almost a weed in some areas. Extremely hardy, as you’d expect.

They’re similar in taste to cranberries but, I think, with more depth of flavour. I first came across them served as a jam with meatballs in a Norwegian motorway service station!