The Best Democracy Money Can Buy by Greg Palast 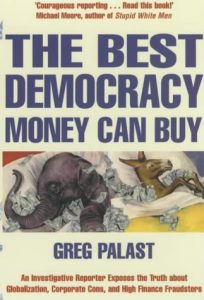 The heart of the book is about the institutionalised economic criminal activity that is part and parcel of the politics of globalisation. Palast portrays the IMF, the World Bank and the assorted group of agencies as institutions that “dream up, then dictate, the terms of the new international economics” to create what he describes as “the Golden Straitjacket” of globalisation.

Greg Palast produces vivid case studies from across the globe to challenge even the most paranoid of conspiracy theorists. On the whole, the book claims to show that economic “assistance plans” presided over by these institutions amount to a (so far) guaranteed sentence of economic damnation.

Available both new and used from Amazon for as little as a penny plus postage.

Amazon Reviews of The Best Democracy Money Can Buy:

“Ok, we all knew that Bush couldn’t have won the election without some shenanigans, but Greg Palast blows the lid off corruption on a scale that’s hard to imagine. How he got through all the red tape and obstructions put up to stop him getting at the truth is amazing.

When he then shows how corrupt are the people in Blair’s close circles, you stop feeling secure in anything. Top that with the machinations of the IMF and World Bank in Latin America, the big business at the heart of political decision making

and you want to move somewhere far away, like Alaska. Except that the Exxon Valdez got there first. Read this book – it shows the world as it is, not as they like you to believe it is.”