Biodiversity. A little word that matters a great deal in the vegetable as well as the wider world. Biological diversity – or biodiversity – is the variety within and between species of plants, animals and micro-organisms. 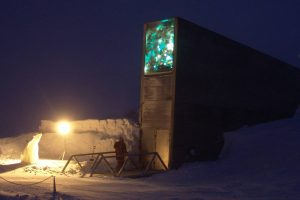 The Svalbard Seed Vault in Norway holds samples of saved seeds from all around the world as insurance against a disaster reducing biodiversity.

If the Irish had known of it, near a million people would not have died in the tragic Potato Famine of the 1840s. The potato famine was caused by potato blight which came into Ireland via a ship from the Americas.

The Irish grew one variety of potato almost to the exclusion of all others – The Irish Lumper. It grew well in the wet Irish climate conditions and thrived on nutrition-poor thin soils. Ideal for gardeners, smallholders and farmers but it had one fatal flaw. It was particularly vulnerable to blight and almost wiped out.

If they had grown many varieties of potato, the chances are good that some would have been immune or resistant and the famine may have been averted.

To the present world, the tremendous number of varieties and their collective gene pool can help overcome the many diseases and climate problems that stress today’s common seed varieties.

This is because one seed type does not suit all growing conditions. Where summers are very short, sub-arctic types will fruit and ripen quickly, often within 45 days. Where summers are hot and long, another variety, large and trailing, will fit the bill.

Local growers knew this and over centuries developed strains to accommodate their conditions and problems, and maximize flavour of course. In the past seed merchants would offer variants on a variety – often with the title ‘Improved’ or ‘Selected’. However, a certain amount of sharp practice took place with premium prices claimed on ordinary seeds.

In an effort to protect the public from the sharp practice, regulations were brought in which spectacularly resulted in the baby being thrown out with the bathwater. Hundreds of varieties that were similar but not identical to others vanished overnight.

Sadly, many of today’s seed catalogues limit our selection to only several varieties per species, if even that many. And hybridized varieties populate the bulk of listings. Much work has gone into hybridization but at the expense of flavour, texture and fragrance.

Not all qualities will fit into one seed. Hybridizers aim primarily for the wholesale production market where uniform size, uniform maturing time and shipping endurance are key elements.

Even open-pollinated varieties (non-hybrid) are selected for uniformity, which is precisely what we don’t want for biodiversity.

How you can Improve Biodiversity by Seed Saving

By saving seeds from plants selected for traits desirable in your location, these will diverge from the standard. Over some generations you will achieve a new variety, increasing biodiversity.

Let’s say a plague like blight hit runner-beans and all of the top ten varieties were susceptible. But you have a variety selected for your own purposes. That could have a side effect of being immune.