Saving Your Own Seeds – General Guide to Seed Saving

This introduction and general guide to seed saving is by Gloria Logan, a Canadian Gardener who saves her own seed and grows heirloom  varieties of flowers, fruits and vegetables in her garden. 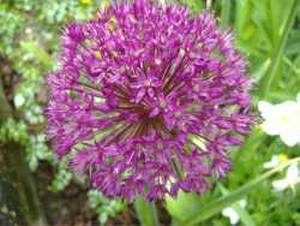 Collecting the seeds is easy, but first a few basics need to be covered. Not all plants give seeds in the same year as they grow like annuals such lettuce, dill, beans, peas, radishes, most herbs. Some plants need a second year (biennials) in which they’ll throw up a seed stalk, eg beets, chard, carrots, parsnips, parsley, leeks and onions.

That said, occasional inclement weather will sometimes force biennial plants to throw up seed stalks in their first year – bolting.

Other plants throw up seed stalks but the seeds are very difficult to start, such as lavender and French tarragon, or are sterile. Both of these are better propagated by live cuttings.

Garlic will throw up a seed stalk with tiny bulblets but these take three years from seeding to harvest, so the actual root bulb is divided and used as seed.

Peas are the actual seed for their kind as are beans and corn kernels. Whereas tomatoes, squashes, melons, cucumbers and most fruits contain seed within the mature fruit which needs to be picked out.

Why so much variety? Nature needs to protect and propagate its species by various means. Should one means fail or be threatened somehow, another has a chance of success.

Without good pollination, there are no seeds. Either the wind does the job, or bees and visiting insects do it. But if you actively spray for bugs you might also kill your pollinators. To keep the variety true, bees aren’t reliable as they wander from variety to variety.

Even if you grow only one variety, your neighbour might grow another and that pollen can be brought to yours by the wind or insects.

If you want to keep a variety true or pollinate two specific plants, then you’ll need to hand pollinate with either a soft, small artist’s or a cotton swab, then place a fine mesh ‘bag’ over top so no further pollination occurs.

I find cut-up yardage of bridal tuile or netting lets in light and air but no insects. Paper bags aren’t good for fruit which need light to ripen, and plastic bags sweat and rot seed heads. If any airholes are punched in, insects are inside messing your efforts.

Immediately after pollinating a plant, label its parentage and bag it before working on another plant. Otherwise, don’t deadhead plants you want seed from and always select the best specimens.

Species won’t interbreed with each other, such as potatoes with carrots, or corn with cucumbers. But varieties within a species can interbreed if too close together, such as zucchinis (courgettes), cucumbers, squashes and melons. Some bizarre results have occurred with such inbreeding. When planting crops, keep your plant families in mind and separated.

For seeds, take sample fruit/flowers from the earliest, healthiest and most vigorous plants. Select from various parts of the growing area so that you get a diverse selection which you can selectively narrow down over time.

A few seeds only from each fruit is needed. Cucumber, squash and melon seeds can simply be picked out of very ripe fruit, placed in a mesh strainer, rinsed well and seeds dried on paper towelling.

Lettuce, leek, beet, carrot, parsley and onion seeds are brown or black in colour when dry and are simply picked out of their dried pods, or shaken over paper towelling or into small bags. Bean and pea seeds also need to stay in their pods until the pods are brown and crispy.

Remove the dried seeds and allow to dry further to avoid mold. Broccoli and cauliflower heads, if left on the stalk, will become flowering seed heads from which seeds can later be picked when dry. Poppy flowers become the familiar shakers containing seeds.

Corn, part of the grass family, needs to grow in blocks (stands) for pollination so that wind blowing the pollinator tassels on top can do the job. But even the wind can fail and a peeled corn cob will reveal many missed kernels resembling missing teeth. Regardless, let the corn mature on the stalk until dry and papery. Pick and husk it, then pop out the individual kernels which must dry further on a flat surface. 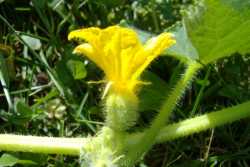 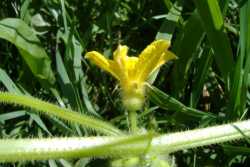 Like the human reproductive system, some species like the cucurbit family (squash, cukes, melons) throw up male and female flowers, one sex per plant. The male flower is just that, only the pollinating flower. The female flower has a swelling immediately below the petals, the future fruit.

This is important to know in case you occasionally end up with all of one or the other and no actual fruit – or seeds. I’ve had this happen twice. So, it’s important to grow several plants to factor this in.

Asparagus plants are also one sex or the other. Regardless of plant sex, asparagus will still throw up edible spears every year.

Rugosa roses are famous for their ‘hips’ , their large ripe, red ovarian seedpods which are often used for teas, jellies and more plants.