When to Plant Comfrey

Ideally plant out offsets in March, April and May or in September. September plantings may not show until the following spring. Late planted offsets in pots can be moved into the greenhouse or a cold frame in late January, early February and will be well along for planting into the ground in early March 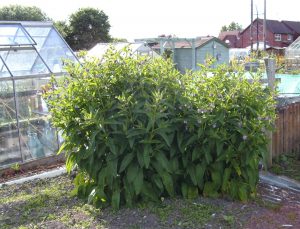 I’ve seen a recommendation to plant comfrey at 45cm (18″) each way. The benefit of this is that the plants will probably shade out any weeds in their first year. But by the third year it will be obvious they’re overcrowded.

When planting on a farm scale, say for pig food by the acre, L D Hills recommended a spacing of 1 metre each way, which allowed for mechanical weeding in the first couple of years.

I would suggest planting at between 60cm and 75cm (2′ to 2’6″) each way as the best compromise for garden scale growing.

In the first year (second for autumn planted) allow the plants to grow to the point where it throws up flower stalks and then cut back to about 15cm (6″) from the ground.

Leaving the cut leaves on the ground as a weed suppressing mulch will return some of the goodness back to the plant.

If you have a good year, then the plants will throw another flush of flowers and you cut as before. After September, leave the plants uncut and the leaves to die of naturally.

Come the winter when the plants have died back, spreading a mulch of manure or compost will get them off to a good start next year. Every three or four years, lime if the soil is becoming acid.

Throughout the growing season you can spread manure, even fresh poultry manure, between the plants. Alternatively a good couple of handfuls of chicken manure pellets per plant with about 250gr (8oz) of fish, blood & bone fertiliser in March and July to really get them set up.

If the plants are not looking too well, it may be a nitrogen deficit. They’re a very leafy and greedy plant. Give around 100 grams (3.5 oz) per square metre of high nitrogen fertiliser like Prilled Urea or Nitro Chalk.

For the next twenty years it’s really just a matter of feeding, weeding if required and checking the soil acidity every three or four years. You should be able to get four or five cuts per year for garden use.

For years I happily harvested a bed of around 24 plants using ordinary garden shears until I discovered the long-handled horizontal bladed shears. They save a lot of bending or kneeling when harvesting. For larger patches, a scythe or sickle will pay for itself in time saving.

Once cut, leave the leaves by the bed to wilt for a day or two before transporting. The water content will have reduced making it easier to handle.

Note: Comfrey leaves have small prickly hairs on the leaves and stems that can cause skin irritation. It is worth wearing gloves and long sleeved shirts when handling.

If harvesting for chicken feed where they prefer the younger leaves, harvest one or two plants per day as require, going around the bed in rotation.

Comfrey is remarkably trouble free in Britain. The only serious disease it suffers from is comfrey rust and the Bocking 14 clone is exceptionally resistant to that. Comfrey rust is very common in the common comfrey grown by herbalists. Rust is a fungal disease that manifests as small orange spots under the leaves, spreading to cover them and eventually sending out spores to infect other plants.

If picked up really early the leaves can be cut off at ground level and disposed of in the dustbin rather than compost. With luck they’ll grow back clean. Sterilising by watering with armillatox or Jeyes fluid used to be a recommended treatment following the leaf cut but as this is not an approved use for the products I cannot recommend it. A systemic fungicide is also worth trying but treated plants should not be used to feed livestock for the rest of the year.