Comfrey has been found to contain pyrrolizidine alkaloids that damage the liver and has been implicated in causing cancer of the liver. Exactly how high the risk is in ingesting comfrey is not known (I suspect it’s small) but it’s use in capsules and as a tea has been banned for some years in the USA, Canada, The United Kingdom, Australia, Canada, and Germany. 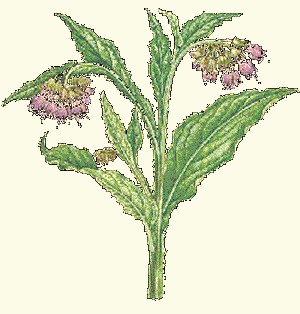 Apparently the test that identified the risk involved injecting relatively huge amounts of the alkaloid into young rats. Until this test there was no suggestion that a cup of comfrey tea a day or applying it to an open wound could cause liver problems.

Those of us who are suspicious of the multi-national chemical and pharmaceutical companies might wonder if they found an advantage in funding research that discredited effective and cheap herbal remedies leaving their own profitable complex products as the alternative.

Interestingly, the very few cases of liver problems, reportedly fewer than 10 cases, that have been blamed on comfrey taken as a medicine are not even clear cut as the people involved were taking other medicines that are known to put the liver at risk. To put things into perspective, by far the most dangerous drug for the liver is alcohol which was a contributory factor in over 6,000 deaths in England & Wales alone in 2006.

You can still purchase ointments or creams and, of course, make your own poultices but should be aware that the alkaloids can be absorbed through the skin so minimise the use of these and official advice is never apply comfrey to broken skin and not to use comfrey ointment on children at all.

We’ve found comfrey and lanolin ointment effective on a range of skin complaints and also the most effective salve for an ear cancer that was itching our cat to distraction. The poor chap was terminally ill with kidney problems so operating to remove the ear (the normal treatment) would have been a cruel use of his remaining time.

Comfrey has a number of old names including Healing Herb and Knitbone, which gives you a good idea of the importance it once had as a medicinal herb. The name Comfrey is in fact a corruption of ‘con firma’, which ties in with its old common name of Knitbone. The botanical name, Symphytum, is from the Greek symphyo meaning ‘to unite’

The great Comfrey restrains spitting of blood. The root boiled in water or wine and the decoction drank, heals inward hurts, bruises, wounds and ulcers of the lungs, and causes the phlegm that oppresses him to be easily spit forth. A syrup made there of is very effectual in inward hurts, and the distilled water for the same purpose also, and for outward wounds or sores in the fleshy or sinewy parts of the body, and to abate the fits of agues and to allay the sharpness of humours. A decoction of the leaves is good for those purposes, but not so effectual as the roots. The roots being outwardly applied cure fresh wounds or cuts immediately, being bruised and laid thereto; and is specially good for ruptures and broken bones, so powerful to consolidate and knit together that if they be boiled with dissevered pieces of flesh in a pot, it will join them together again.