Growing in a Polytunnel in March

What to sow, plant and harvest from your polytunnel in March

You will really feel the warmth in your greenhouse or polytunnel now and so do your plants. They start to grow quite rapidly now but be aware that the nights are still quite cold and there is still a high risk of frost. Many garden centres will try and sell you tomato plants from the end of March onwards. Don’t let them tempt you until May. 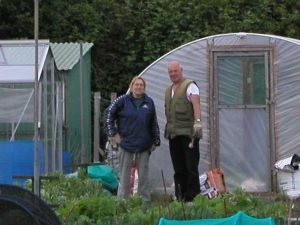 Sowing in the Polytunnel

In March you can still sow the following vegetables directly into the soil. However, if you sow carrots, beetroot and peas now they will only be ready in mid June which is far too late to plant your tomatoes or peppers.

You can now plant out the seedlings you raised earlier on your heating bench: lettuce, scallions, dill, coriander, chervil, early cabbage, calabrese, mini cauliflowers, early leeks, perpetual spinach, Swiss chard, salad rocket and all other oriental salads. Most seedlings take about 4-5 weeks from sowing until they are ready to plant.

Do not let your heating bench clutter up too much. Most vegetables only require some warmth for germination and in March the seedlings are better off if placed on a non-heated bench in the tunnel or greenhouse. Only your tomatoes, peppers, chillies, aubergines, courgettes, cucumbers, squash, pumpkins, celery, celeriac and basil should remain on the heating bench until they are planted in May. Really all other vegetables should be moved off the heating bench about a week after they have germinated.

In March you can sow the following vegetables into modular trays and place them in your propagator or warm, south-facing windowsill in the house:

Do not sow your cucumbers and melons yet. You’ll get much better results if you wait until April to sow them.

You can also raise the following vegetables indoors for planting out into your vegetable garden later.

Harvesting from the Polytunnel

You can still harvest the overwintered Swiss chard and perpetual spinach and towards the end of the month you should get your first radishes and baby turnips.

Earth up potatoes and still watch out for frost. If frost is forecast you can either completely cover the potato stems with soil or compost or alternatively cover them with a double layer of fleece.

This Article is by Klaus Laitenberger, expert on Polytunnel Growing.

Klaus grows in the challenging conditions of Ireland and has experience and knowledge of growing under shelter in polytunnels and greenhouses.

This Page is Sponsored by:
First Tunnels Polytunnels