Growing Damsons – How to Grow Damsons

How to Grow Damsons – A Guide to Growing Damsons 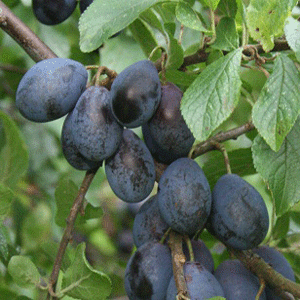 Damsons are actually a form of plum but with a generally tart flavour and being used more for cooking, jams, wine etc rather than eaten fresh.

Damsons are hardier than most plums and will often succeed in situations where a plum tree would fail to fruit. By selecting a damson on a dwarfing rootstock it is possible to have a damson in a small garden or even to container grow them.

You can also create a hedge or windbreak of damsons. Buy Farleigh as half-standards on St Julien A rootstock. Plant fairly close, 1 to 2 metres apart. Will reach 4 to 5 metres high

When planting in poor, sandy soils, dig as large a hole as you reasonably can and add 500 grams of bonemeal to the base. Mix the removed soil with good quality compost and back-fill. Ideally, test the pH and if below 6, add lime to take it up to 6

In early spring scatter 75 grams per square yard of general purpose fertilser such as blood, fish & bone or Growmore around the tree to the edge of the branch cover. Follow up with a 50mm mulch of compost and / or well rotted manure being careful not to take it right to the stem.

Every 3rd or 4th year, lime around the plant to keep the pH up to around 6

Whilst they do not like a waterlogged soil, they need to be kept moist. In dry weather water well, especially in the early years until they become established.

Plant bare-rooted trees in late autumn or early winter. Pot grown can be planted at any time.