Champion show grower John Trim reveals the secrets of growing trench celery in this first part of a two part article  – all to get you the winner’s red card at the show.

There are two main types of celery, self blanching and trench. The latter grow much bigger and are the ones to use for exhibition. Of all the 20 point vegetables celery is a tricky one to grow to perfection.

Coming from a family of South American bog plants that should make it obvious that this vegetable needs plenty of water. If you can”t water virtually every day, then this vegetable is certainly not for you.

Varieties of Celery to Grow for Show.

A few years ago it was the open pollinated variety “Ideal” that ruled the roost on the show bench. 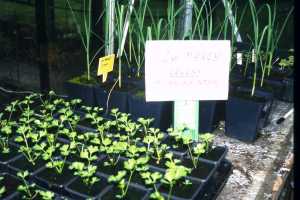 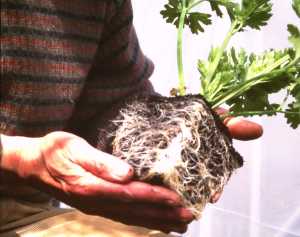 Time to pot the celery on. A tinge of browning root is visible at the base of the pot 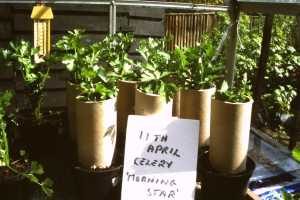 The celery with cardboard inserts. A cheap and effective method of gently drawing up the stalks.

More recently through a programme of hybridisation we now have several excellent and vigorous F1 additions to the celery stable, “Ideal” has rather been left behind. Look out for the varieties “Morning Star, Evening Star and Red Star”. All with a flush of pink up the long stalks, they look a treat on the show bench.

On average it will take 30 weeks from seed sowing to harvest. My first sowing is made on 1 st February to cover the late July shows. “Morning Star” seems to be the one that copes best as an early grower.

Fill a half seed tray with Levingtons F2s seed compost and stand in a bowl of warm water until thoroughly moistened. Sprinkle the fine seed over the surface of the compost. Do not cover the seed. Instead spray overhead with warm water containing copper fungicide “Cheshunt Compound,” letting the spray drift down onto the seed.

Pop the tray into a propagator set at 70f/20c . The seed must have good light conditions for efficient germination which will take approximately 2 weeks. And don’t forget to spray the seed with water every day

Growing on the Celery 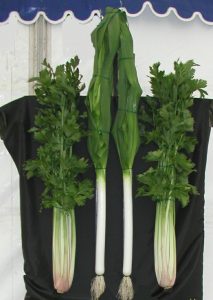 It is important never to allow celery to become pot bound. Once the pot is full of root pot them on. If the roots start to turn brown at the tips the celery is showing signs of stress indicating you have left potting on a bit too late.

In approximately 3 to 4 weeks the celery will be ready for the final move into 5” pots using Levington M3 compost. During this process of potting on the celery is kept moist by standing in a tray to which you add water on a daily basis. The plants should never be allowed to go dry.

In the early stages of growth the celery is held upright with a couple of split canes with plastic rings clipped on.

When the plants are 12” tall I use cardboard tubes taken from carpet inserts cut to 9” in length and slip these over the celery plants. The object is to gently draw up the blanch without the cardboard being tight against the stalks.

One thing to bear in mind. Make sure there are plenty of slug pellets around the celery. Once a slug or snail has a nibble of a stalk it is a potential entry site for “celery heart rot”. And even if the plants survive the heart rot the nibbled stalks are a disfigurement and will be down pointed accordingly by the judges.

From mid April I give the plants a weekly feed. First with high nitrogen Chempak No 2 or preferably Vitax 301 because it has all the necessary trace elements.

The following week I give the plants Calcium Nitrate. This is an essential feed, for as well as providing a little boost to growth it also boosts the plants immune system giving increased protection against disease. It also wards off celery heart rot and can even effect a cure if you spot the rot early enough by doubling the normal dosage and applying weekly until clear

This is the first part of a two part article. The second part is Exhibition Trench Celery