Cultivation – How to Care for Peaches & Nectarines by Carol Klein 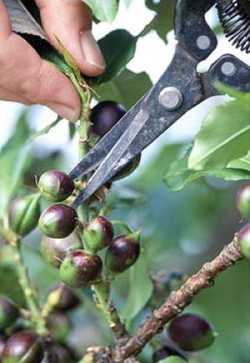 Peach leaf curl, Taphrina deformans, is one of the main problems when attempting to grow peaches and nectarines. This fungal disease also affects almonds and apricots.

It is easily recognisable in early spring when the leaves become covered in reddish or whitish blisters and begin to curl-up. Eventually the leaves drop to the ground leaving the tree bare. Although the tree will send out a second flush of leaves, the tree is placed under great stress making fruit production unlikely.

Evidence shows that plants protected from the rain as the buds start to swell are less likely to suffer from peach leaf curl.

Covering the tree with a polythene or glass cover should help to keep the buds dry and reduce the spread of infection. For the really dedicated grower specially-made covers can be made to fit over fan-trained trees against walls or fences. Ensure that the sides are left open to allow air-circulation and enable pollinating insects to reach the flowers. The covers should be in place by December and left until late May.

The spread of infection can also be reached by removing the infected fallen leaves and burning them. This prevents the spread of spores that will effect the following year’s growth.

A copper fungicide, such as Bordeaux mixture, can be applied before the flowers open in January or February, spraying again a fortnight later. One more spray at leaf-fall in autumn should help to reduce the spread of infection.

Generally it is not the cold of winter that harms them and they will quite happily survive outside in these conditions. Instead it is their early flowering habit in early spring that makes them susceptible to frosts. Compact peaches grown in containers should be kept in a greenhouse until the risk of frosts are over, whereas fan-trained or bush-shaped trees should be covered with hessian or fleece. Alternatively the temporary polythene structures used to prevent peach-leaf curl will give extra protection against early spring frosts.

As with most fruit, birds are a major pest for peaches and nectarines. Not only do they peck holes in the ripening fruit, but bull-finches in particular, have the habit of pecking out the buds as they develop.

Despite being self-fertile, peaches and nectarines benefit from assistance with the pollination of their flowers. They flower early in the year, meaning that there’s a lack of pollinating insects around.

Traditionally hand-pollination is carried out with a rabbit’s tail, gently pushing it into the flower and transferring its pollen to the surrounding blossom. If a rabbit’s tail is unobtainable then use a soft brush or even cotton wool. This should ideally be carried out each day during their flowering season.

As the fruits develop they will need thinning to allow the remaining fruits to develop to their full size and obtain maximum sugar levels.

A commonly used rule-of-thumb is to thin the fruitlets out to 10cm (4in) when they are hazelnut size, and 20cm (8in) when they reach walnut size. Aim to have the fruits spaced equally over the plant, removing ones that will become trapped and bruised against the wall when fully ripened.

Both peaches and nectarines will require regular watering as the fruits start to swell. This is particularly the case for trees planted near walls as they absorb the moisture, making the soil dry.

Compact peaches in containers should be re-potted every couple of years, using John Innes no. 3. They will require watering almost every day during the growing season and a fortnightly liquid feed high in potash every couple of weeks. They don’t require much, if any, pruning and should be moved into an un-heated greenhouse from December until May.

& is used with permission 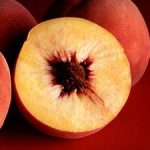 Growing Peaches and Nectarines - How to Grow Peaches 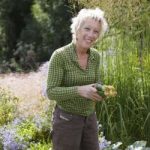 Introduction Peaches & Nectarines A ripe peach picked straight from the tree is one of the juiciest fruits that can be grown in the garden, rewarding the gardener with a drink as much as an edible feast. The closely related, smooth-skinned nectarine... 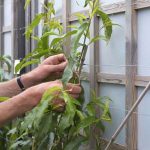 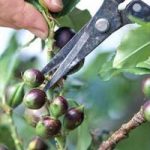 Cultivation - How to Care for Peaches & Nectarines by Carol Klein

Peach leaf curl Peach leaf curl, Taphrina deformans, is one of the main problems when attempting to grow peaches and nectarines. This fungal disease also affects almonds and apricots. It is easily recognisable in early spring when the leaves become... 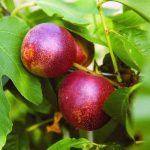 Harvesting Peaches & Nectarines Expect about 9 to 12kg (20 to 28lb) of fruit from a mature, healthy fan that hasn’t been affected by frosts or peach-leaf curl. A free-standing bush will produce as much as 20kg. Peaches and nectarines are best e...