Free Seeds when you buy Our Bestselling Books
Home › Vegetable Growing › Growing Cucumbers – How to Grow Cucumbers › How to Feed Cucumbers – Best Feed to Use, NPK Etc.

This article on feeding cucumbers explains the best fertiliser mixes to use for growing cucumbers for the home gardener.

Use the Right Feed Mix for Better Cucumbers & More of Them! 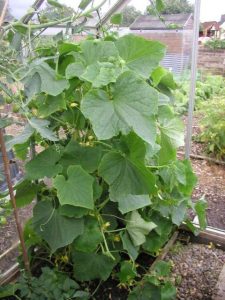 Better results for the same effort but better feeding

Greenhouse cucumbers are generally grown in the same house as tomatoes, peppers and aubergines by home gardeners and naturally enough the gardeners tend to just feed the cucumbers with the same feed they are using for the tomatoes.

A tomato feed will be near ideal for peppers and aubergines, all three belong to same family, solanaceae, as potatoes but cucumbers are cucurbits – members of the Cucurbitaceae family – like courgettes, marrows, pumpkins and squashes. A tomato feed is not ideal for this family and especially not the cucumber.

By looking at a mature cucumber plant it’s apparent the leaf area is much greater than a mature tomato plant. Since the fuel of leaf growth is nitrogen, it’s obvious that cucumbers require more nitrogen than the other major nutrients, unlike tomatoes whose prime need is for potash. A good quality tomato feed will supply the major nutrients (NPK) in a ratio around 10:10:30 usually with added nutrients such as magnesium and other trace elements.

Looking at the recommendations for commercial cucumber growers, they agree that a much higher nitrogen level is required along with magnesium, calcium and other trace elements like boron, iron and manganese.

Fairly near to the commercial fertilisers would be Miracle Gro with its base NPK level of 24:8:16 plus trace elements although this is deficient in magnesium and calcium compared to commercial cucumber feed. Magnesium is easy enough to add in with some epsom salts and calcium feeds can be purchased.

If you’re going to go to the lengths of buying a soluble calcium fertiliser supplement you may as well go all the way with Chempak High Nitrogen Feed #2. This is balanced at 25:15:15 NPK and contains all the trace elements except for calcium which can be added by mixing a small amount of Chempak Calcium Multi-Action in with the high nitrogen feed. Chempak Calcium Multi-Action is 15% Nitrogen and 25% Calcium. NPK 15:0:0 + 25% CaO

Many organic growers will use comfrey liquid as a greenhouse tomato feed. It’s well suited to this as the NPK ratio is very similar to commercial tomato feeds but, once again, it’s not ideal to feed cucumbers.

A better organic feed for cucumbers would be a nettle tea, made by steeping nettles for 3 to 6 weeks in water. Another organic liquid high nitrogen feed that would benefit cucumbers can be made by steeping a hessian sack full of fairly fresh horse droppings in a barrel of water until the water turns dark brown. This is called a muck tea.

A good level of home-made compost in the border should provide the trace element requirements to feed cucumbers. 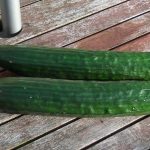 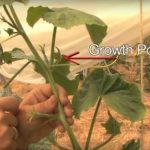