The Rules of Rotavating

This article, The Rules of Rotavating, is adapted from a leaflet produced by Howard Rotavator Co. Ltd. around 1974. It was obviously to promote the Howard Rotavators which were very popular from the 1940’s through the 1970’s. The Howard Rotavator and Howard Rotary Hoe story actually starts in 1912 when Arthur Clifford Howard began experimenting with rotary tillage on his father’s farm at Gilgandra, New South Wales, Australia.

My thanks to Rodney for providing the pdf copy of the original leaflet entitled “Eat well all year round… Mechanise your garden with a Rotavator.” 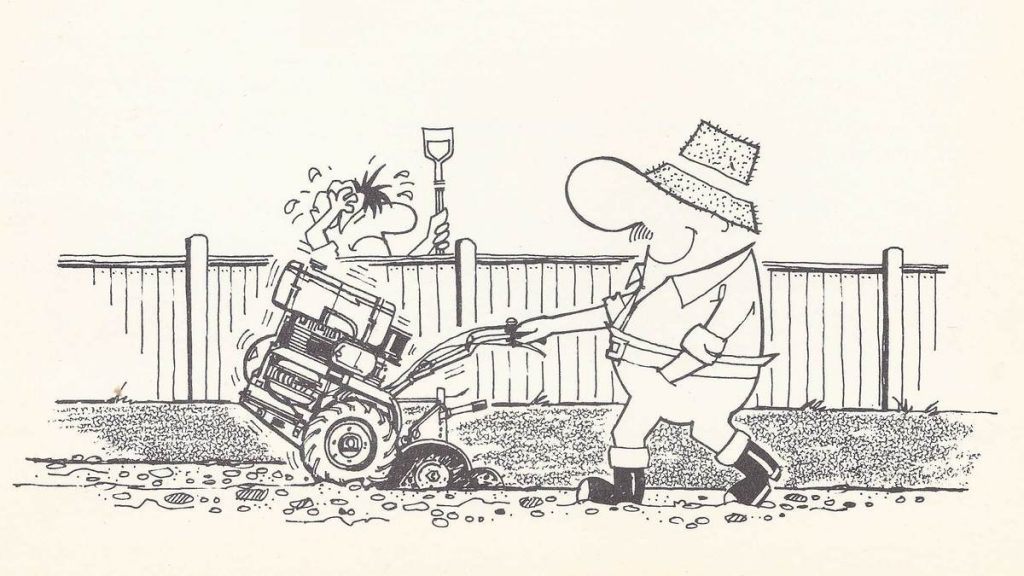 Take the hard work out of gardening -Rotavate!

Take the hard work out of gardening -Rotavate!

Few garden owners have the time or the leisure to make the most use of their land for home-grown vegetables. Yet with soaring prices in the shops and the introduction of deep-freezers, how worthwhile it is to grow as much of one’s food as one can.

First essential in creating a productive garden that can be tended with a minimum of labour is to mechanise the work, and many householders and allotment-tenants have taken up Rotavating as the first move towards this. There are models in the Howard* Rotavator range from 3 to 10 hp. All of them have the particular Howard advantage of powered wheels — you only need to steer them.

For the ordinary garden, here are a few simple rules to remember, if you are to make the most of your food-growing capacity, and the time you can spare is limited.

Rule 1
Keep the rows as long as possible 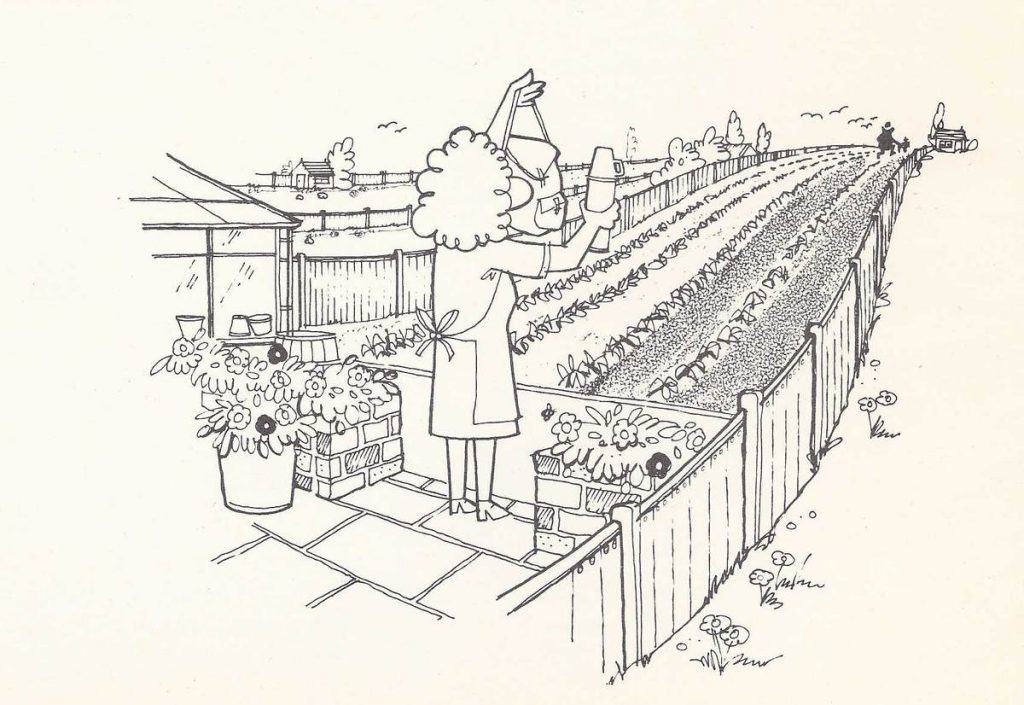 One long row takes far less labour than two or three short ones- If necessary sow only part of the row, using sections at a time for successional sowings.

Rule 2
Space the rows to fit the Rotavator 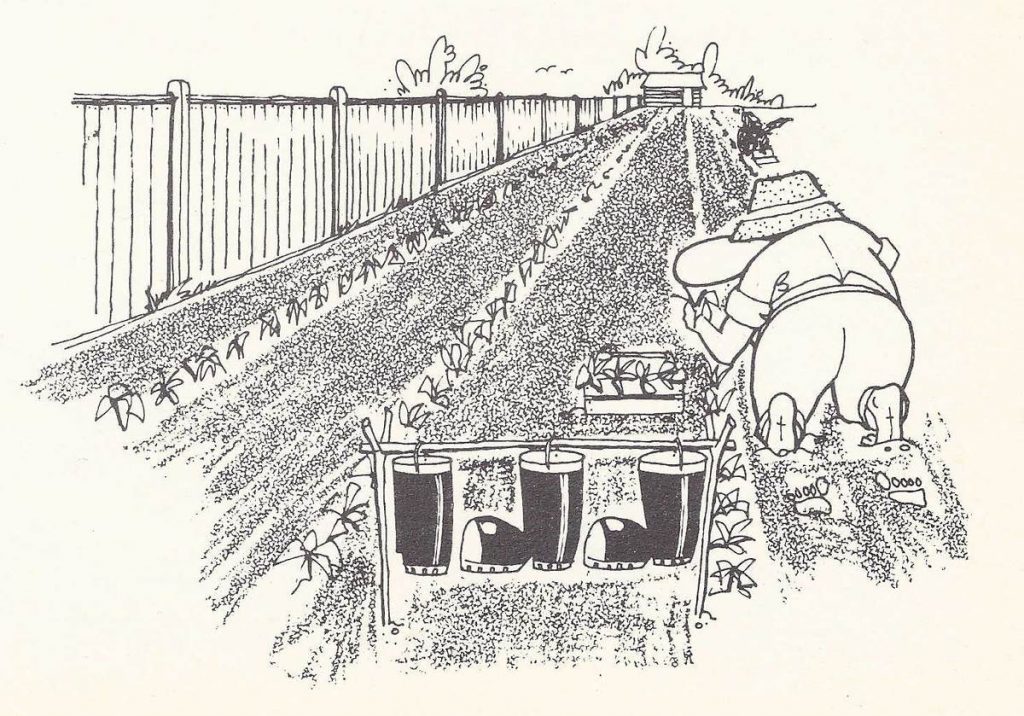 It’s best to aim at well-spaced rows so that you can hoe between them up to the time when the plants are we formed. For a Model 350 for instance, a good way of measuring the width is ‘two-and-a-half Wellington boots apart.’

This should be approximately 30″ (76 cms) and is a good rough-and-ready means of calculation when you haven’t a rule in your pocket, if space is at a premium, double rows can be planted with crops such as beans or leeks.

Rule 3
Don’t walk on your work!

The Howard Rotavator’s handles can be swung into an offset position: you can walk beside it rather than behind it. There is never a need to walk on cultivated soil. 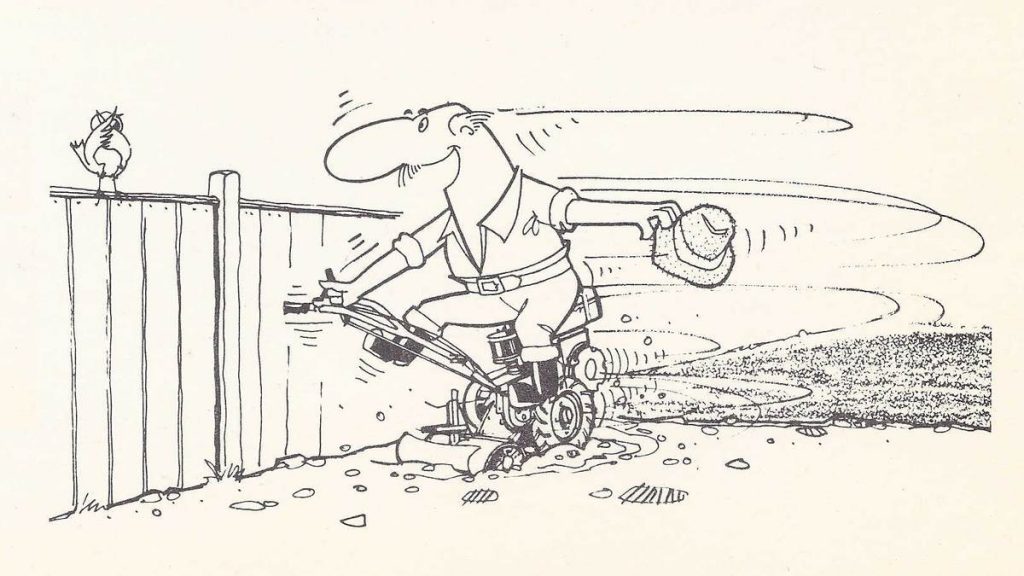 Simply turn the machine in reverse.

Keeping headlands to a minimum is no problem with cultivators like the Model 350 and Gem Rotavator. Simply turn the machine in reverse. Not only do you save land: it is also very much easier to turn.

Rule 5
Waste not, want not 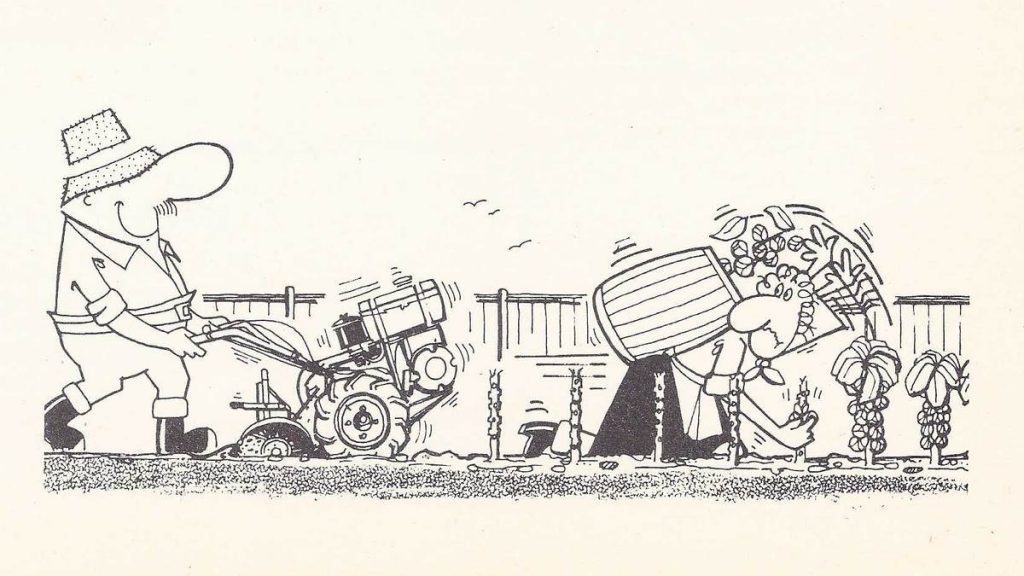 Waste not, want not!

Unless you want the material for a compost heap, there is no need to remove anything from the vegetable garden unless it is to be eaten. All residues such as bean vines, cabbage and Brussels sprout stalk, old pea haulms, can be chopped up and turned in by the Rotavator. This practice will steadily improve the structure and fertility of the soil. 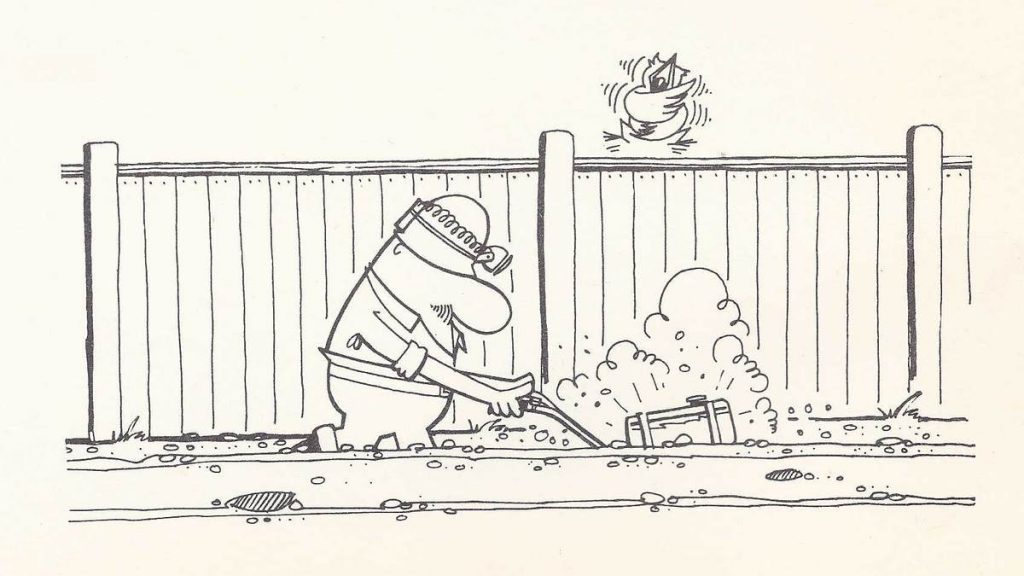 One of the greatest mistakes a gardener can make is to Rotavate too deep.

One of the greatest mistakes a gardener can make is to Rotavate too deep. Except in the case of potatoes, deep work is not only unnecessary. It is also undesirable. Over-pulverising the soil too deep will result in a mud pie if rain falls. It is seldom essential to work the soil more than 3-4 ins (7-10 cms) down — just deep enough to incorporate all the crop residues. Shallow though it be, such a depth of tilth will grow excellent deep-rooting crops such as parsnips.

Remember that normally only about 20 per cent of the work of a garden cultivator is in actually making seedbeds. The other four-fifths of the work lies in keeping the garden clean with the maximum of ease during the growing season.

Some people festoon themselves with equipment that they rarely use. For the average home-growing gardener, the only extras that are necessary for profitable Rotavating are a pair of side shields (for the 220 and 350) – to prevent soil splash on young plants — and a furrowing attachment for making drills and earthing up potatoes.

Rule 8
Rotate as you Rotavate 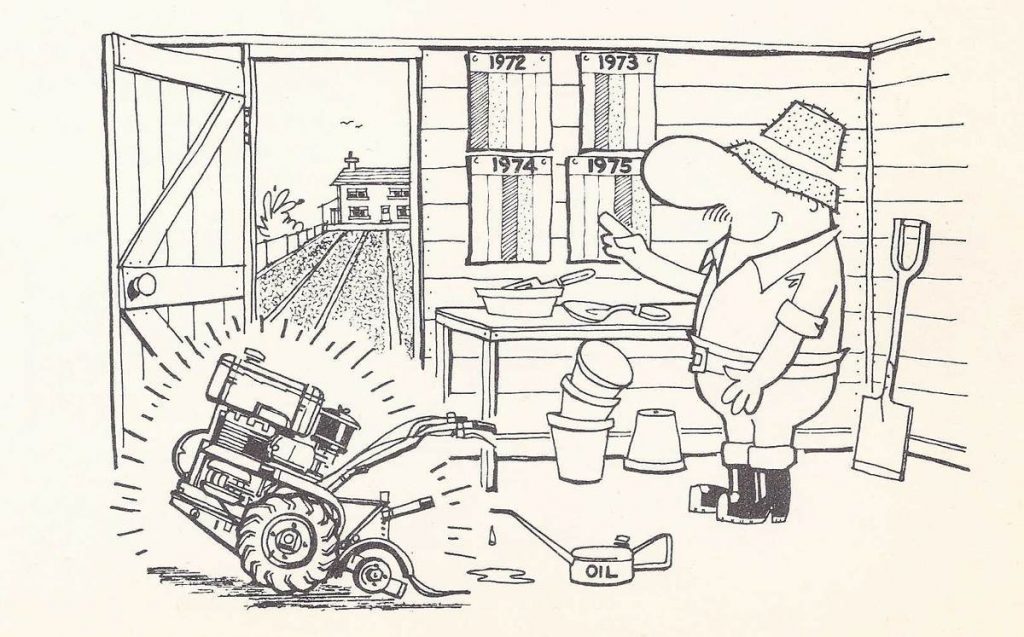 Don’t grow the same crop in the same ground two years running. Divide the garden into sections and vary the crops in each section from year to year in order to have a normal rotation and avoid the build-up of specific pests and diseases. It is also a good idea to put the second year’s crops between the rows used in the preceding year. Some Rotavator users go so far as to sow green crops between the plant rows in order to turn them in as green manure for the benefit of subsequent crops.