Runner beans and climbing beans are very productive, making brilliant vertical use of space but they will require a support. There are a number of ways you can do this. 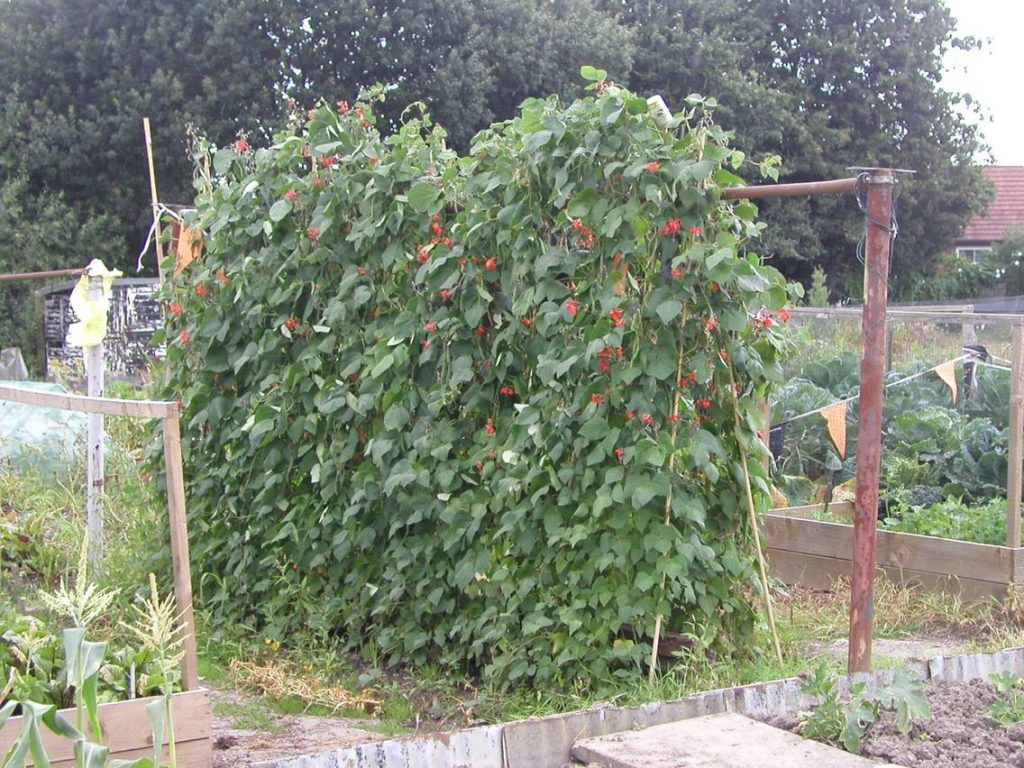 The traditional bean support frame was constructed with coppiced poles, about 8 feet, 2.4 metres long and around 2”, 50mm thick at the base. Nowadays most people just use bamboo canes.

Ideally the frame should run in an east-west direction to equalise the light on both sides but in practice the direction doesn’t make a noticeable difference. 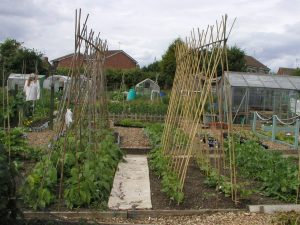 Lay a pole along the row across the base of the V created by the crossing poles and tie together with twine, keeping the same along the row spacing of 9” as at the base.

Finally drive stout stakes into the ground at both ends of the row and attach taut twine to the frame to stop it from collapsing along the row. Once completed the frame should be stable with no rock because, once the beans have grown up the frame it will suffer pressure from the wind.

This is basically the same as the traditional frame except the distance between the rows is wider, usually around 3′ (1 metre) and the angle of the poles is more shallow so that the poles cross about half way up.

The theory is that the beans are easier to locate and pick than in the traditional frame but slightly more effort is required training the beans to stick to their own pole.

These are simple and quick to build. Draw a circle with a radius of around 1′ (30cm) to 18” (45cm). The easy way to be accurate is to put a stick in the centre and attach another stick which is used as a marker to it with string. Draw around by scraping the marker stick into the soil.

Space the poles as normal or a little wider (upto 12”) around the circle angled to meet in the centre. Tie this together with string. You can also buy plastic discs designed to hold the poles together which are very effective.

The drawbacks with tipi frames are that they are vulnerable to wind and it can be hard to find the beans in the centre. I’ve used them with good results, although one year they blew over. 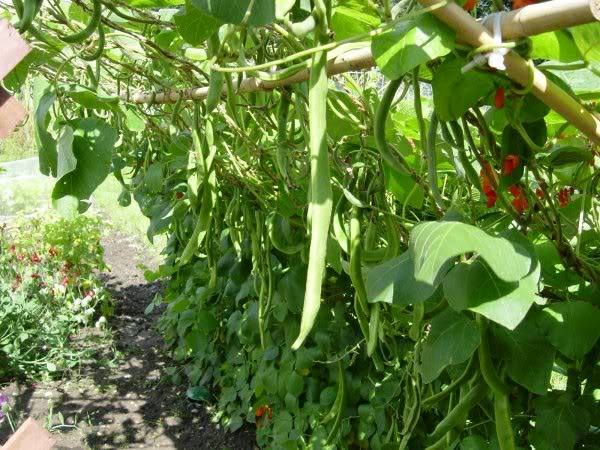 I first heard about the dog leg frame method on my forums back in 2007 from member Muntjac and it has become quite popular since then. Its benefits are that:

The drawbacks are that the frame takes a little more effort to construct than traditional frames and it also takes up a little more room.

There are various methods of construction but the one that seems easiest is this. 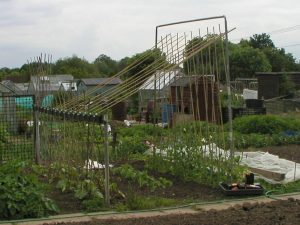 First drive two stakes a foot (30cm) into the ground in a row about 6 to 8 feet (2 to 2.5 metres) apart connected by cross piece, rather like a football goalmouth. The stakes should be about 3′ (1 metre) high above ground. Another crosspiece is placed about 8” (20cm) above the ground. This doesn’t need to be very sturdy, bamboo cane will do.

The next row should be 6 to 8 feet (2 to 2.5 metres) away and again joined by a crosspiece. The stakes on this row should be about 6′ (2 metres) high above ground. The stakes and crosspieces should be sturdier than bamboo canes, treated 2×1 roofing battens are ideal and economical, available from builders merchants.

The plants should initially be wound around the string and from then they should grow up the string and across to the tall crosspiece. An alternative is to leave off the lowest crosspiece and just bury the strings under the plants as you plant out.

A tipi shape can be made by inserting a sturdy pole in the ground and taking twine from the pole to the planting holes in a circle. In other words, replacing the bamboo canes in the tipi above with twine. 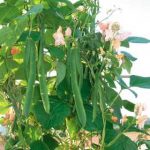 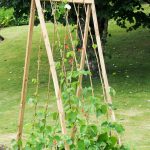 An elegant and attractive frame provides a decorative support for climbing beans. This structure is simple and cheap to make, and folds flat when not in use, taking just a few minutes to erect again in late spring. You Will Need For...