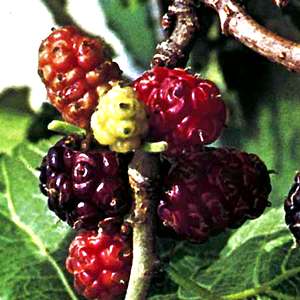 The black mulberry is generally grown for its fruit. The white variety does produce fruit, but smaller and much less sweet.

They can grow as high as 8–12 M (25–35 feet) but can be pruned and grown as a bush or an espalier. The trees can take from at least four years to six years to start producing fruit.

For advice on growing mulberry trees see our Grow Your Own Mulberries guide.

The 'Chelsea' or King James' Mulberry is a traditional variety dating back from the reign of King James I in the 17th century. A very attractive tree, slow-growing but long-lived and capable of growing to quite a large size. The dark red, almost black, fruit are similar to blackberries in appearance but are very juicy with an exquisite intense sweet-sharp flavour which surpasses that of any other berry! Self Fertile. Supplied in a 2 litre pot.

Named after, and originating from the oldest of its species in the country, which was planted at Charlton House in 1608 at the behest of Charles I. Mulberry 'Charlton House' makes a stunning, large tree with gnarled bark, heart-shaped leaves and an aged habit. The black mulberry tree is long lived but slow-growing, often taking up to six years to produce fruit, and producing its heaviest crops after a cold winter. However with maturity this self fertile tree produces dark red, almost black berries with a juicy, distinctive, sweet flavour. The mulberry fruit matures slowly during the summer months and ripens during August. A choice tree for a spacious garden. Height: 12m (39'). Spread: 15m (49').

Please note that all prices and descriptions on this site are believed correct but should be confirmed on the relevant site prior to order. Please let me know if you find an error via the contact page.
Copyright Information: The Images, seed Descriptions and Titles on this page are used with permission of the copyright holders - Dobies Seeds, Suttons Seeds, Thompson & Morgan

Our Books - A Growing Offer!