Milk is obviously the main ingredient for cheese and may be from cows, goats or dairy sheep. There are also some that use buffalo milk. 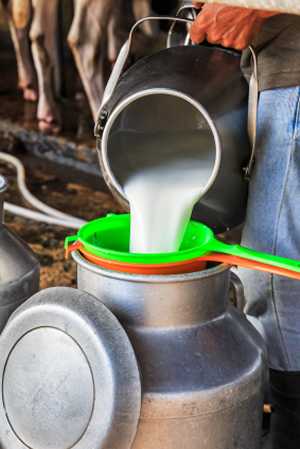 Buying milk from retail sources such as supermarkets will cost more than buying directly from the farmer.
To make cheese at a competitive price you will need to source direct from a farmer or smallholder

Milk is obviously the main ingredient and may be from cows, goats or dairy sheep. There are also some that use buffalo milk. In fact, from the regulatory point of view, milk is recognised as being a product that emanates from these four animals.

Dried or frozen milk will produce perfectly good cheese, as well as milk from the milkman or supermarket, although the latter will be more expensive than having your own dairy animal or bulk source of milk.

This is a culture of the appropriate bacteria to ensure that milk is at the optimum level of acidity or ripeness before it is turned into curds and whey. There are several different strains available, depending on the cheese to be produced.

The most common ones are Streptococcus lactis and Streptococcus cremoris. Some cultures have a range of different bacteria, making them suitable for all types of soft or pressed cheeses, while others are manufactured for specific cheeses.

Cheese Starter Cultures tend to be of two types:

Starters are available in freeze-dried form, in foil packets, from specialists who supply by mail order. They need to be stored in the freezer until used. They are generally available in one of two forms: DVI (direct vat inoculation) cultures or the traditional ‘incubated before use’; ones.

The direct vat inoculation cultures are the most convenient to use because it is merely a matter of opening the foil sachet and sprinkling the starter into the milk in the vat. One sachet of Ezal MA4001 or 4002, for example, will be enough for 50 litres of milk, so while suitable for the commercial dairy, may be too much for home use.

However, it is possible, although not recommended, to use some of the powder, then re-seal the sachet with tape and freeze it until next time. The general guidelines as to its usage are as follows:

Traditional or ‘incubated before use’ starters are those that need to be prepared before use. Some of the most common are Ezal MM100 and 101, but there are many others. The procedure for preparing them is as follows:

After taking the amount needed for making the cheese, the rest of the culture can be frozen.

Home users may find it useful to store the rest of the culture in a self-sealing, ice-cube freezer bag until needed. One of these cubes is approximately equivalent to one tablespoon.

Next In Making Cheese at Home

Next we look at the Cheesemaking Ingredients, Rennet Salt Herbs etc >>