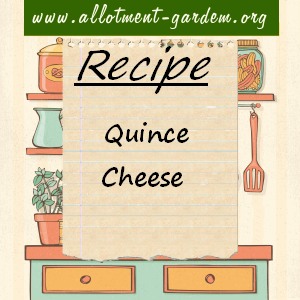 Whilst on a trip to Wales we managed to “scrump” a bucket of quinces from Shipley Gardens. The owner was quite happy for us to do so, we left with the impression that it was quite common for visitors to be allowed to leave with a few apples or pears.

The quince tree was not exactly over-pruned, which was a fairly typical state of affairs for all of the fruit trees in this fairly naturalistic of gardens. Its heavily laden boughs yielded fairly small quinces, which made the preparation of the cheese time consuming.

Washing the fur from the skin cutting out any bruised parts as you go. Then core, I found that the easiest way to do this to the hard fruit was to cut it into quarters, then to take off a single diagonal slice from each quarter, starting from the stalk end. The cores, with a fair bit of flesh, were retained and used elsewhere. The ‘cheeks’, skin and all, were pressure cooked with a scant mug of water at 5psi for an hour.

The quinces were then passed through the fine plate of a mouli-legumes (sieve), placed into a jam pan with an equal weight of sugar and boiled for about ten minutes. The mixture should be as thick and as dry as possible. It will probably spit, so keep stirring continuously and protect your hand and arms. Don’t allow the mixture to rise above 105Celcius or else you’ll start to produce syrup and not jam.

Pour the mixture into moulds, I used 20cm bread tins lined with greaseproof paper, and leave to dry outside for a week. Well that would work if you live in the Alentejo region of Portugal where the thermometer often reaches into the forties. In the UK a different strategy is called for. Leave the cheeses in a very cool, 45Celcius, oven for three days, turn out, turn upside down,  and return to the oven for another two to three days.

Once cool the cheese should be as solid as a soft bit of cheddar. It will keep for a few weeks in the fridge.

Enjoy the preserve on its own, with bread, or with cheese.