Back down to the plot in the afternoon to continue the good fight. One year I’ll manage to get everything done on time rather than spend the season trying to catch up! 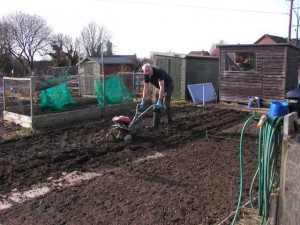 Jim was rotovating his plot when I arrived. He’s one of those growers who just does it by the book and gets the results. A modest chap, he says he’s not particularly green fingered but he likes a tidy plot. I know I’d be proud to have a plot as neat as his is.

Finished off tidying the paths on plot 29. The rotted wood chippings and weeds were just skimmed off and dumped onto the compost heap followed by a new layer of chippings. It looks so much better when the paths look tidy at least.

The chippings have nearly gone now, maybe one wheelbarrow load left. Hopefully there will be another delivery or two yet. They’re so useful.

There was a couple on one plot measuring up to convert a well dug plot into raised beds. They’ve apparently got a lot of slabs so intend to use them for the paths between the beds. I must admit I’ve my doubts about raised beds. There are situations where they are useful but on plots with good soil I think they’re just a waste of space and effort.

I spent an idle ten minutes looking at some plots and I reckon nearly half of the available space is taken up with paths, seating areas, pergolas etc. The old timers seemed to manage without all that. They just filled the plot with crops!

Well I inherited raised beds on plot 29, even if they’re the wrong sizes to be convenient. They’re starting to collapse now, the corner posts are rotting as are some of the boards so next year I think the plot will need re-organising. At least the paths will dig in easily.

My next job was to plant my shallots out. These can go in at anytime really from late December but the weather has hardly been suitable. I know they’re pretty hardy, but often a later planting avoids the heavy losses bad weather can cause.

I like to give my shallots plenty of room to develop so they went in at 8″ spacing in rows 1′ apart. I could probably get away with 8″ both ways but I’m not short of space so why not allow them a goodly amount of room.

The biggest problem I have with shallots is the dratted pigeons. They wait until the shallots start to shoot and then pull them up. I reckon they think the shoot looks tasty, pull it up and then discover they don’t like onions. So then they try the next one and so forth. Maybe they’re just malicious flying rats!

So, more for the pigeons than anything, I covered them with fleece. I normally weigh down the fleece with milk containers filled with water but my stockpile of them hasn’t survived the freezing winter so it was back to those plastic stakes and a board weighted down with a couple of bricks to hold the surplus in place in case of strong winds.

Lots more to do, but it’s starting to take shape again. I should be caught up by next year!