Being as the weather is so awful, I thought I’d share how we use our freezer to help us keep our head above water with inflation as it is. It’s not the first time we’ve gone through inflationary times and we learned a few tricks to help back in the 1970s / 80s. 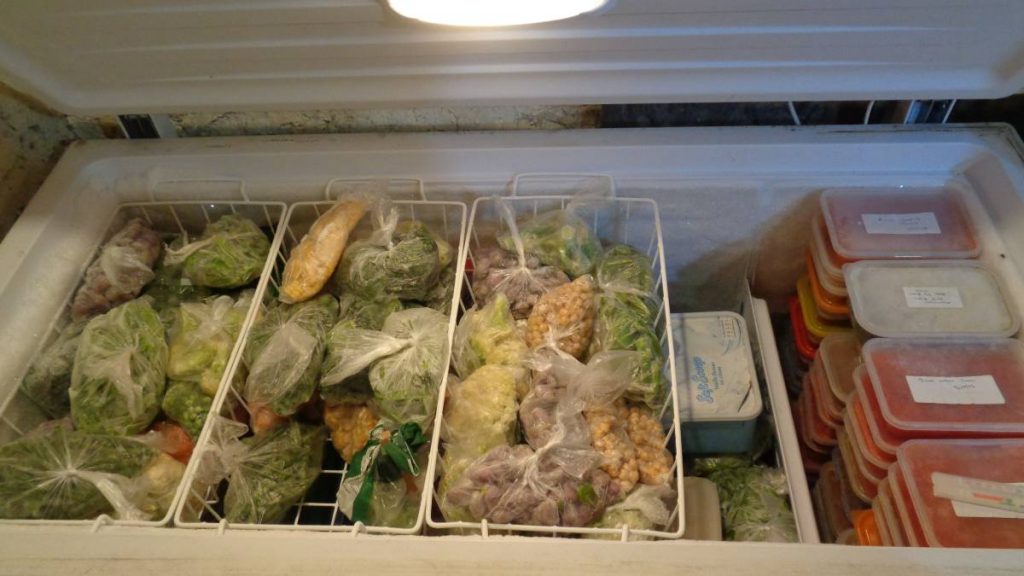 The chest freezer is getting awfully full of home grown and home made produce plus bargain buys.

We bought some butter whilst shopping the other day. We spotted it on the shelf at £1.85 for 250 grams. Incredibly that’s a decent price nowadays. The next day the price went up to £2.25. That’s a 22% increase! Will it come back down? Dream on!

We also picked up some bread down to half price due to short shelf life along with some kidneys, also at half price. The kidneys had the magic words ‘Suitable for home freezing’ on the pack so we picked up 5 packs.

In our experience bread stores well in the freezer for six months and meat for a year. We’ve kept butter for near two years in the past. What happened there was that a local supermarket was closing down and they had masses of butter reduced to pennies and I filled a trolley with it. I didn’t really think about how long it would keep in the freezer, but it was fine for the two years it took for us to use it all.

Now we have some savings which generate interest at 1.1% pa. In other words, with inflation at the headline rate of 10.1%, £100 in the bank will in a year become £101.10 and buy £90.89 worth of goods. However our butter has saved us 22% – less a little bit for the freezer. Some people buy gold as a hedge against inflation, we buy golden butter.

Our chest freezer is large (360 litres capacity) and officially uses 313 kWh/Year. I say officially because actual consumption will vary according to the external temperature and the internal temperature. I aim to keep our freezers around -20ºC to -22ºC (-8ºF) to maximise storage life so it may use a bit more than the official consumption figure but it’s in a cold shed so maybe not.

Incidentally, if the power goes off the chest freezer will hold for 36 hours but the 40 year old upright is in trouble after 6 hours. Don’t forget, in a power cut do not open the freezer and let the heat in or the cold out if you prefer.

Returning to electricity costs, that works out at .87kWh per litre per year for the big freezer. So keeping 4 blocks of butter frozen (0.912 litre volume) for a year will use about .8kWh. At the current eye-watering rate of 34p per kWh that butter costs 27.2p to store but saves £1.60. We’re still winning.

Is it worth replacing the old freezer?

Back in 2009 I measured the energy consumption of our freezers. Only one of the freezers we had then is still going, the upright. The oldest one which we run through a device called a Savaplug. Sadly those plugs are no longer sold as they work really well with older freezers.

That old machine isn’t efficient, using around 556 kWh a year, but it’s proven very reliable. How long it will go on for is anybody’s guess but 10 years wouldn’t surprise me.

Since electricity costs have shot up, that freezer now costs about £190 pa to run. A new, efficient equivalent freezer would use 307 kWh so saving about £85 pa. It would hold temperature for 18 hours in a power cut as it has better insulation. And it would cost £449.

So even at today’s cost of 34p per unit of electricity, it will take 5 years to recoup the investment. Still, that’s a 20% return which is pretty good. Assuming the new freezer lasts…. Maybe best to stick as we are.

6 comments on “Freezers – costs and savings”