Lifted the potatoes from the walled veg garden. They’ve done much better than the field plot which I’m putting down to the richness of the soil. Only problem is that something has been biting chunks off them. 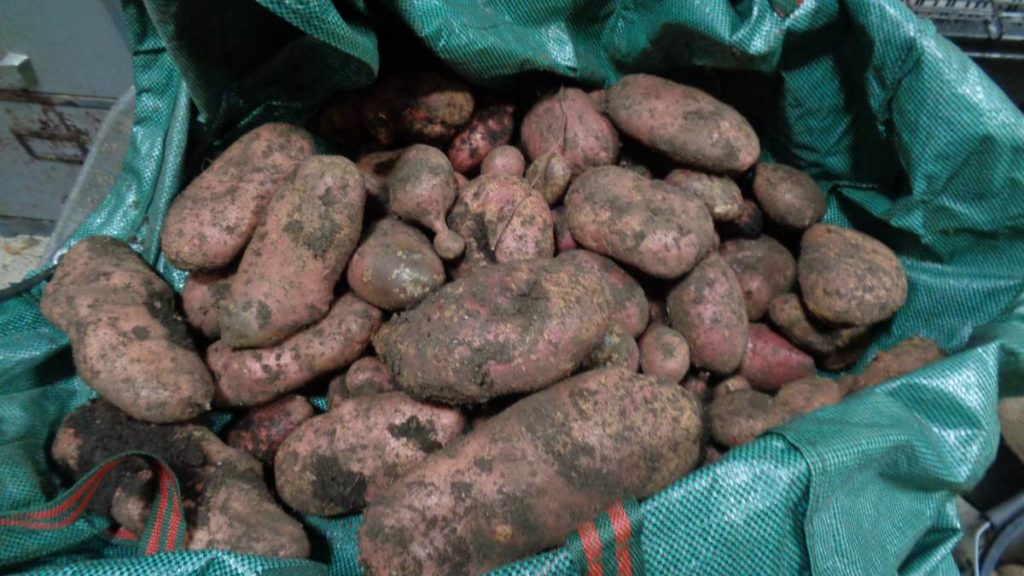 Some massive Sarpo Mira to sack up.

I’d suspect a rat or even a rabbit except I found a large hole. Bigger than a rabbit. Maybe a fox although badger was suggested. I didn’t think we had any badgers around here but perhaps I’m wrong. Probably a fox, I know we’ve foxes around here.

The bulk of the potatoes are Sarpo Mira and, as usual there’s a lot of them. The individual tubers are pretty large in the main but I’m a bit worried about hollow heart. This is getting to be more of a problem in recent years with our ‘drown or drought’ weather. You can’t really tell until you cut the potato open, so I’ll find out the proportion affected as we use them

I’d have left them out to dry off a bit but with our weather it was bound to rain so they’re in the big shed to dry off before I sack them up.

I thought to make a start on setting up the raised beds by the polytunnel. The first thing was to level the ground and that’s where the plan failed. It doesn’t look as if it slopes much but it does.

Using a batten and spirit level, I established it wasn’t going to work as I originally thought. That’s the problem with having hilly land, what looks level isn’t. Quite what I’m going to do, I don’t know. I’ve a couple of ideas but need to check them out in detail before deciding.

Began clearing the centre bed in the polytunnel. The French beans have about finished but still managed to give half a colander full as I took the plants and stringing down.

It takes a lot longer to separate the plants from the string than you might expect but it’s a once a year job. Once the centre bed is clear, I’ll remove the top couple of inches of soil and pop that on the plot. Fork the soil in the bed open and replace with fresh compost.

The side bed isn’t as full so that will just get forked open and then compost added. By forked open I mean that I just stick the fork in the ground and rock it back and forth. I’m not turning the soil, just opening cracks to facilitate the compost penetrating down. 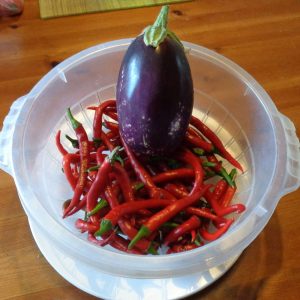 Some Chilli Peppers and a small Aubergine

Harvested the red chilli peppers. Still quite a few green which I’ve left for now. Usually we dry them and grind them up to use as cayenne pepper in the kitchen. I quite like spicy hot foods but Val’s not so keen, so I grow a fairly mild cayenne variety. Strikes me as a bit daft growing super hot chillis that nobody can eat.

Quite a few sweet peppers left, they’re mainly green and I’ve left them on the plants. When they do come inside, I should be able to redden them using the banana trick.

Another couple of aubergines came in. Probably my best year ever for aubergines. Wish I could say it’s skill but I think it’s luck and weather. One aubergine left on the plant to swell a bit more and that will be it.

Still harvesting tomatoes although they are running down now. Taken out a few plants that we’d had all the fruits from which opens up the space. IO was harvesting a lovely truss of red ripe Ailsa Craig only to find a little snail had munched them. Splits and nibbled just get cut up and given to the chickens so not all is lost. I’d have preferred them on my plate, but we don’t always get what we want.