Coping with the Heatwave, Hosepipe bans to come?

How we handled the great two day heatwave of 2022. Will there be a hosepipe ban soon? Plus some thoughts on longer term water independence. 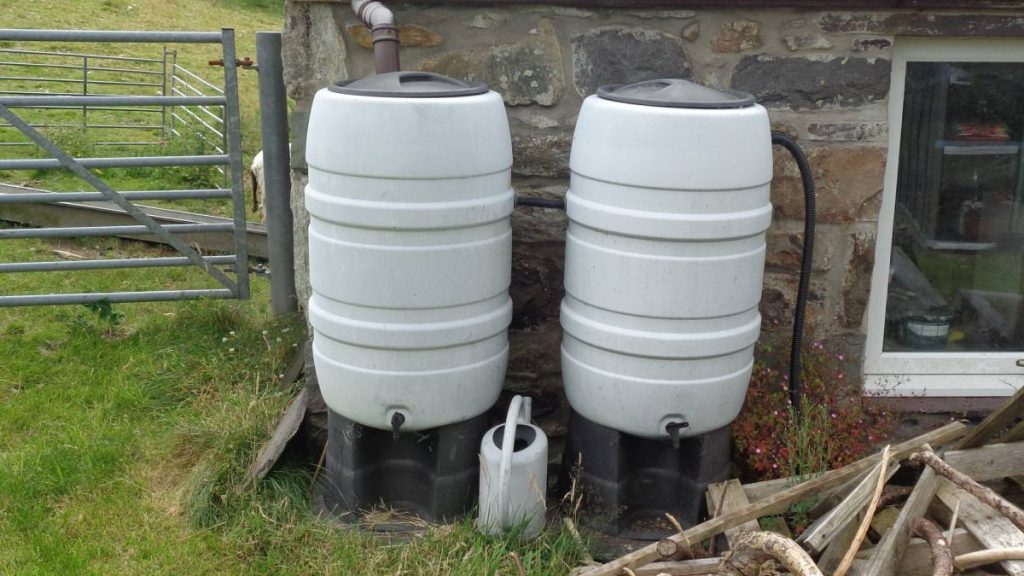 My double water butts fed from the roof – will they be enough next year?

Well the heatwave was quite dramatic but not the apocalypse, which was the story the media was desperately trying to portray. Of course we were lucky where we are in North Wales, effectively on the coast. The temperature peaked around 32ºC on the patio but the house remained at a cool 21ºC as the heat takes a while to seep through the thick stone walls.

Quite how we’d have felt if we were in England hitting 40ºC, I don’t know. Probably have spent the afternoons wandering around the freezer section of air-conditioned supermarkets! What was weird was how quickly it arrived and then departed again.

My main worry was the greenhouses and polytunnel. Opening the doors and vents fully was not going to do the trick alone. Some years back I bought a set of misters for the tunnel, not for watering but for temperature control. Best £15 spend, that was!

The misters produce a fine spray of tiny droplets which are at about 5ºC (mains water temperature). The droplets absorb heat as they float down to the plants and soil below. Once they land they evaporate which takes more of the heat away. Having the doors open and solar fan running means a good airflow through the tunnel so the humidity goes down fairly quickly.

I haven’t got misters set up in the greenhouses so I set the watering wand on mist and held it up high. It only takes a couple of minutes to bring the temperature down although it needed repeating a few times.

Prepared for the Heatwave

Thanks to the Met Office we knew this heat was coming, so I made sure the plots were well soaked the night before. Wonder how many gardeners were moving a sprinkler by torchlight in the wee small hours.

The dripper lines in the greenhouse and polytunnel borders had been running for 24 hours so the soil in there had plenty in reserve to cope. The strawberry hanging baskets needed watering twice, morning and afternoon.

In the greenhouses I had topped up the quadgrows and chiligrows. Normally that’s a weekly job at most but they needed topping up after a just a day of scorchio temperatures.

The flowers in troughs and pots on the patio needed watering twice, morning and late afternoon to keep them going. Some of the smaller pots dried out nonetheless, so these were set in seed trays which were filled with water to rehydrate. A few hours later the plants were perking back up as the pots as the water was absorbed.

Wales normally doesn’t have a problem with water but this year seems to be very dry. Welsh water’s reservoirs are well down on where they should be. Yesterday they supplied more water in a day than ever before. If we don’t get some significant rain soon, I expect they’ll have to implement a hosepipe ban.

I do have some rainwater storage but nowhere near enough to service my garden needs in a hosepipe ban. If we are going to get hosepipe bans regularly then I’ll need to sort out some serious water harvesting and storage.

The easiest and cheapest option would be to get some IBC tanks and store rainwater from the roof. See this post on providing water on allotments. Thing is that a 1,000 litres sounds a lot but it doesn’t go as far you might think in a heatwave. So to cope with an extended drought period without mains water I would need multiple tanks.

We do have an old well here. It may be possible to use that as a water source. Certainly there is a pipe at the well head which would have connected to a pump at one time. An idea worth exploring.

Another idea is to put a pond in uphill fed by the natural winter run-off. It could be tricky though, we’ve some pretty huge boulders lurking under the surface that would defeat a digger.

If drought and heatwaves causing water shortages are going to be more common in the future, something to think about now.

Leave a Comment Here on Coping with the Heatwave, Hosepipe bans to come? Cancel reply