Having started my vitamin B12 injections, I’m feeling a bit more energetic and brighter. I can’t say I’m 100% but I’m getting there. Getting more done now on the plots. 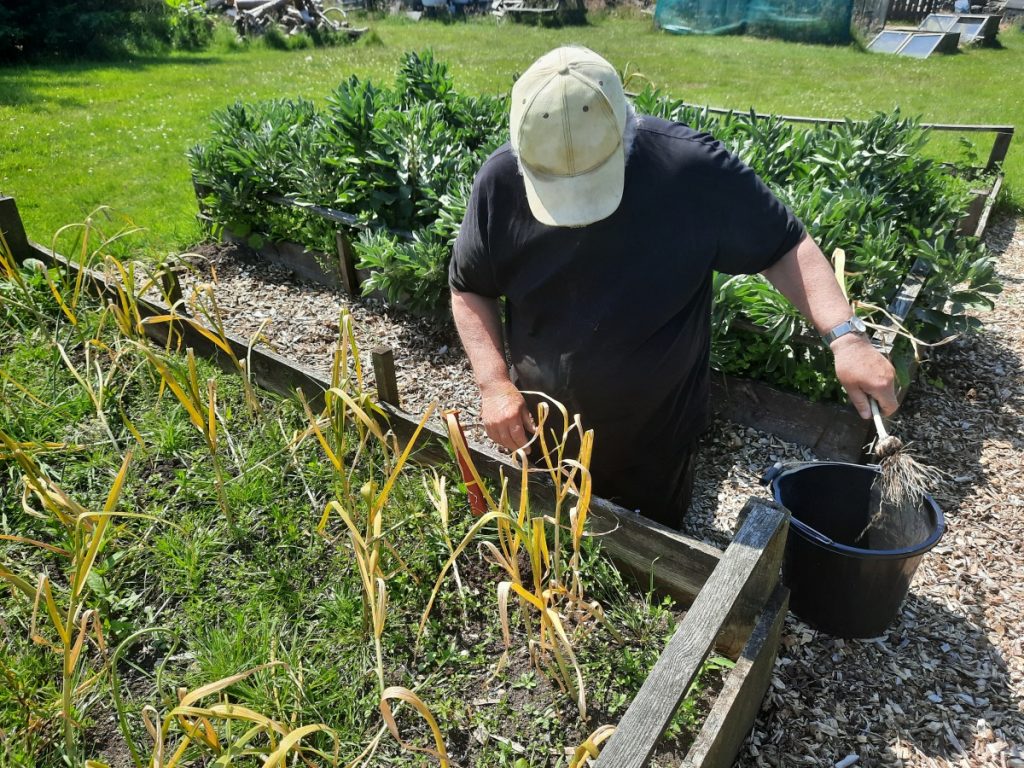 Harvesting Garlic from the Raised Bed (Ignore the weeds!)

We’ve been enjoying some fantastic hot, calm and sunny weather. Just what we needed to lift the spirits. Of course, hot and sunny means dry so a lot of time spent watering. With the area I’ve got under cultivation, I’ve found raised impulse sprinklers to be best. 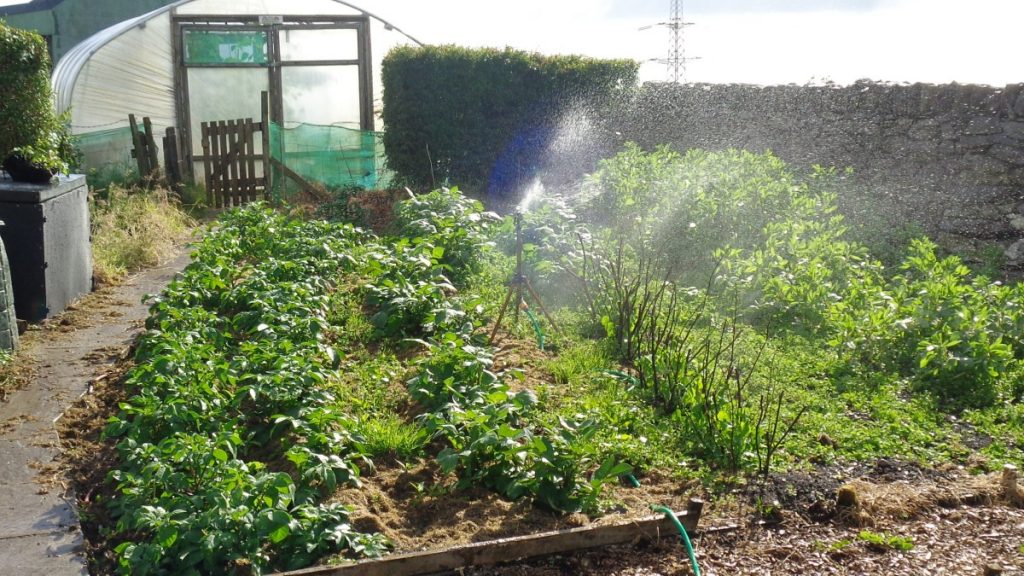 Drip-line systems are most efficient for water use as the slow watering sinks into the ground but setting up drip lines for the various beds and areas would be a lot of work and even more expense.

To reduce evaporation losses and avoid scorch by watering in strong sun, I tend to water late evening or even at night. Nipping out at midnight to turn the water off by torchlight might cause the neighbours to gossip but so what?

I do have driplines set up in the Vitavia greenhouse border and two of the three main beds in the polytunnel. Because of the slow rate, I often leave these on for long periods, all day in hot weather. It’s pretty difficult to over-water with drip lines, so not a concern.

The impulse sprinklers I use are the ones on an adjustable tripod, they’re available on Ebay for around £20.00 now. Mine are about 10 years old, the legs are a bit rusty but they still do the job. The dripper lines are from Access irrigation. If you’re not sure what you’re doing, they’re very helpful.

All the calabrese and early potatoes from the polytunnel have been harvested and the climbing French beans are coming thick and fast. We’re now getting first earlies from the raised bed in the field veg plot. Half the bed is Colleen and half Casablanca. 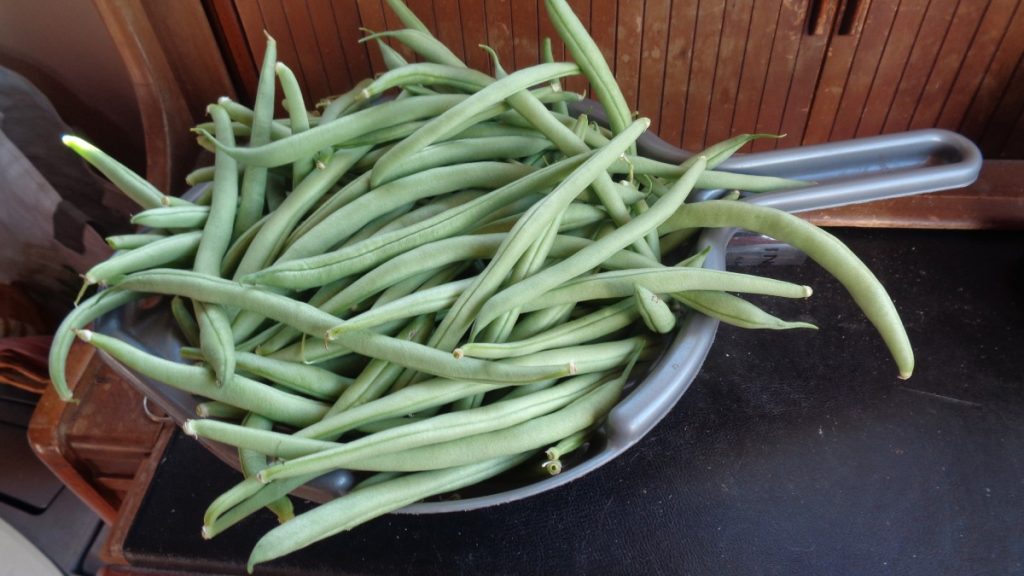 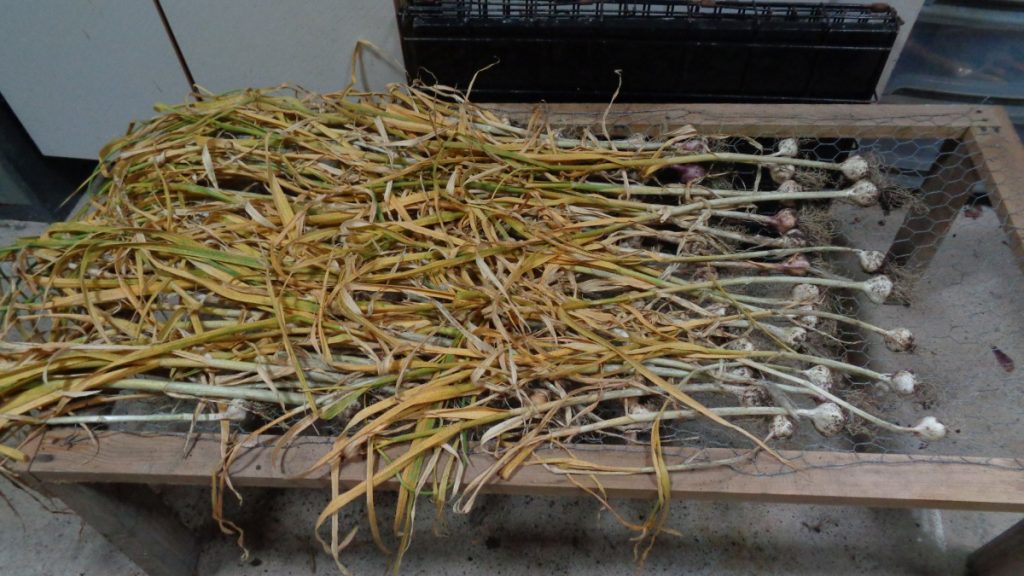 Garlic Drying undercover. The rust is very apparent on the stalks but the bulbs are OK

I’ve harvested the garlic from raised bed in the field plot. Despite being badly hit by rust, a reasonable crop which is now drying on the rack under cover.

The bulbs are a little smaller than I would like but I put that down to the rust and my not giving them a supplementary feed at the beginning of April as intended. I didn’t keep as close an eye on the water situation either. So the report is; 7 out of 10, more attention to detail required next year.

See: How to Grow Garlic & Master Garlic Grower Shares How he Grows Garlic 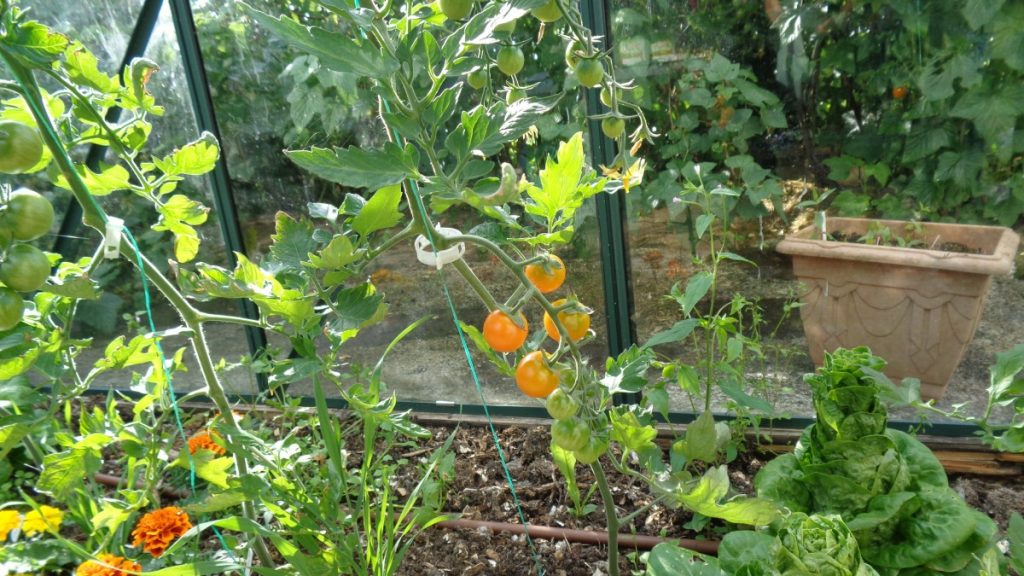 Spending a fair bit of time sideshooting the tomatoes in the greenhouse. The border is getting fed weekly now the fruits are developing. I reckon we’ll be eating our own fresh tomatoes in a week or two.

I’ve also got some lettuce between the plants. Our lettuce consumption tends to depend on the weather so we usually end up with some bolting in cooler weather when salads aren’t as appealing. They don’t go to waste though, they get converted into eggs by the chickens. 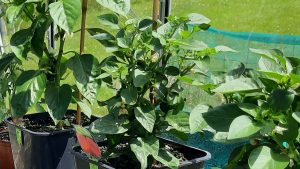 Peppers Forming in the Eden Greenhouse 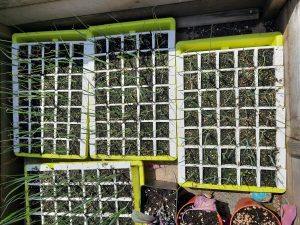 Leeks in Bustaseed modules in the coldframe. About ready to start planting the largest. 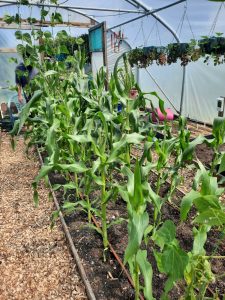 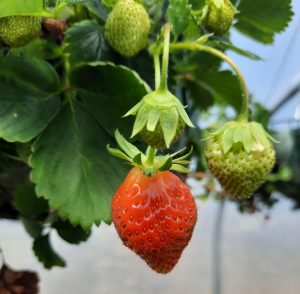 Still the odd Strawberry in the Polytunnel