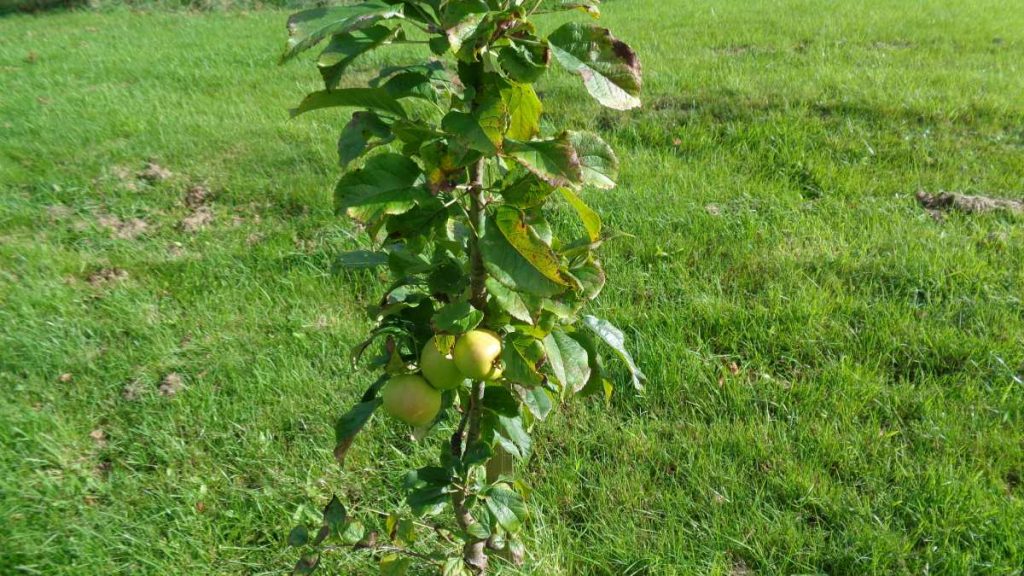 I’ve some fruit trees near the walled vegetable plot. It’s relatively sheltered where they are but until now they’ve not produced anything since they were planted in 2017. I knew I was being hopeful when they went in, but you never know.

The apple tree was attacked by sheep who escaped the field a couple of years ago which damaged the leader as well. I just wrote them off in my mind. As it takes no effort to leave them where they are, that’s what I did.

The first sweetcorn harvest from the polytunnel did very nicely, thank you. Massive plants over 8 feet high that gave 2 good cobs per plant. The cobs were well filled with no blanks when they were unwrapped. The shelter and warmth combined with a manure rich soil and plenty of water to make the crop a real winner.

The corn outdoors is another story. The soil is just as rich and it was watered in dry periods but wind-rock and cool temperatures were against me. The plants were half the size of those in the tunnel for starters. Most started forming two cobs but quite a few didn’t develop. Pollination was poor, probably due to wind blowing the pollen from the flower at the top away before it fell to the cobs below. Lots of blanks when they were unwrapped.

Even so, a poor crop is better than no crop. Since a storm was due and some of the plants were about to go over, harvested the lot. I’d say that growing in the tunnel gives double the yield per plant of outside and is more reliable.

The climbing French beans (Cobra) in the polytunnel are basically finished now. Those we couldn’t eat fresh were blanched and frozen. We’ve more than enough. It’s a good job they’ve finished, the freezer is very full!

The runner beans were very late to start this year but they’ve been doing brilliantly. I don’t know how long they’ll keep going but I suspect it will depend on the wind. They’re on a teepee which is further stabilised by guy ropes but a strong blow may well be the end for them. They’re looking decidedly wonky now. 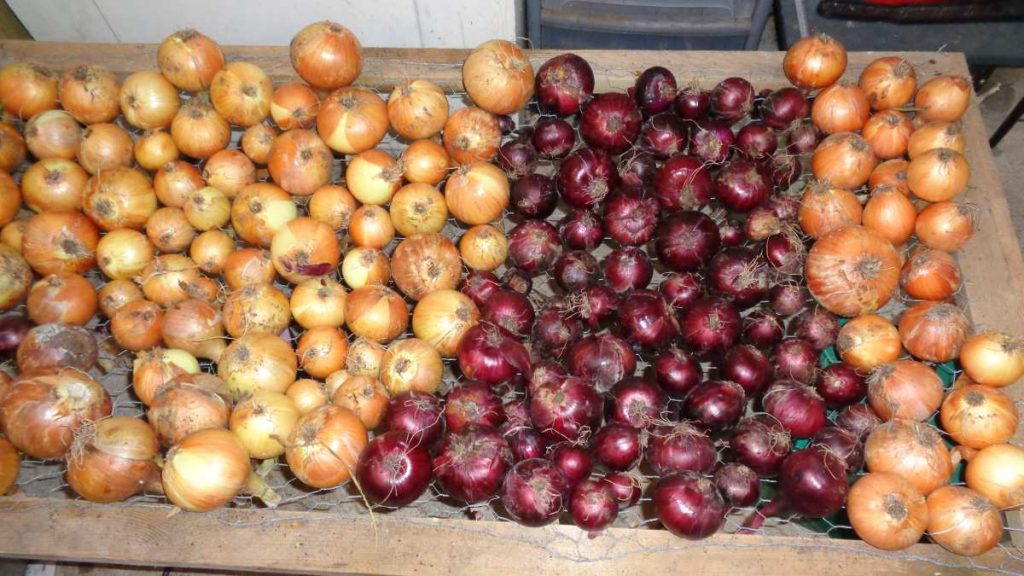 Drying Onions – trimmed and placed neck down on mesh.

Because of the weather here, I’ve had the onions drying on racks in the big shed with a fan going under to circulate air. I thought they were drying nicely but we’ve got some rot and they’re nowhere near as dry as I’d like.

I’ve trimmed the foliage back to a couple of inches from the bulb and they’re on the rack stem-down. The fan’s still going and hopefully we won’t lose too many more if they dry more.

The problem with onions here is humidity, Snowdonia is a notoriously damp climate. Humidity helps moulds and rot. There’s not much I can realistically do but maybe I can come up with a sheltered racking system outside that will do the job.

They’re trimmed too far to string so they’ll go into net bags when they’re as dry as I can get them. The onions that are starting to rot might get transformed into an onion soup, assuming they’re not too far gone when cut open.

I’ve been watching the petrol panic buying with mouth open. Never underestimate the stupidity of some people. Apart from the obviously suicidal fools filling a bucket with fuel, an explosion waiting to happen, petrol doesn’t store that well. Those who’ve stocked up with fuel for months can look forward to expensive garage bills when their clogged engines need serious attention.

Happily I managed to get 20 litres from our local garage as the car was running on fumes. That will last us until November. I didn’t dare fill the can for the mower though lest they think me one of the idiots. That will wait a week or two anyway.