The weather has really been against me. Day after day of cold damp drizzle with really high humidity. That’s perfect for moulds. Despite having the door open in the day and the solar powered fan when the sun shines, the humidity is really high in the polytunnel. Then again, it’s high full stop. 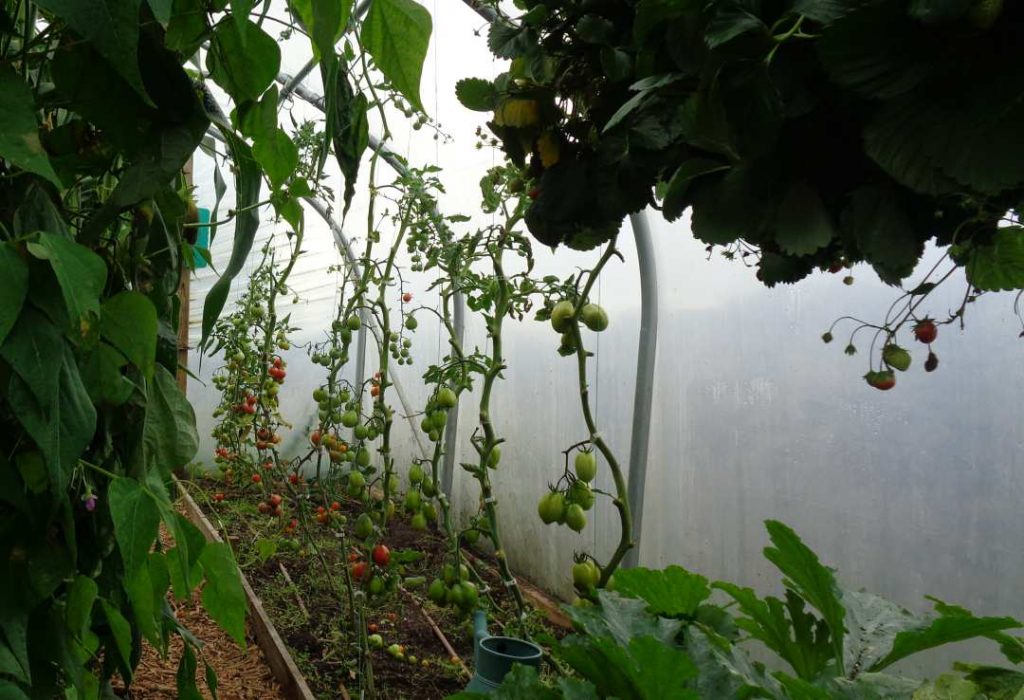 Tomato plants after having their leaves removed in the polytunnel.

In the polytunnel the Grushovka bush tomatoes went down hard with blight and moulds. There’s not a lot you can do when that happens. I cleared the plants and saved what I could of the fruits. They’re a great tomato, large and good tasting fruits but I really don’t get on well with bush tomatoes inside or out here. They always seem to do well until mould or blight hits them.

The cordon plants were suffering with brown mould killing some leaves. I stripped nearly all the leaves from the plants to slow the progress. You can see clouds of mould spores if you knock the leaves. Not good.

Most of the fruits are still green. Where they’ve started to rot, usually visible as a discoloured patch, they go to the Hotbin composter. Since even ones that look OK may well develop rot, the bulk will be turned into green tomato chutney. Those left on the plants may be OK yet but I’ll have to check carefully, frequently.

To help the plants push their resources into developing the fruits still hanging, gave them all a good feed. I’ve a feeling it may be in vain but worth a go. Years back a friend had her tomatoes completely stripped of their leaves early in the season by a hailstorm. Amazingly they cropped really well. 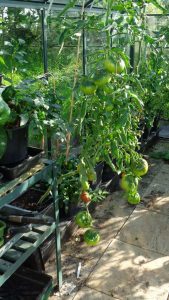 The last of the strawberries are being really hit by botrytis, some of those that looked perfect when harvested in the morning were growing furry grey mould by tea time. Oh well, we’ve had a very good run of strawberries this year.

The tomatoes in the greenhouse are, so far, doing well. The Black Krim are just ripening now and are spectacular. They’re very large, mainly between 400 and 500 grams. OK, not the prettiest tomatoes with a tendency to split but they’re so flavourful. Great for slicing to a sandwich or a salad with a little garlic salt and oil.

We’ve also got quite a few Black Opal which are small but prolific and they come in before their big cousins.

The cucumbers in both the greenhouses and polytunnel are suffering too. The leaves are suffering what I think is Anthracnose. They might, with luck, survive but I doubt it.

Most of the stored crop were good but there’s always the odd one that starts rotting. Left in the sack, the rot will spread. Simple to sort and only a 10 minute job. Empty the sack and check each one before repacking. Any that look a bit dodgy can go to use now or the bin. I did catch a few.

The maincrop outside has the blight. I’ll cut the haulm off and leave the tubers in situ for the skin to harden. We were doing so well but I can’t control the weather and conditions have been perfect for blight. 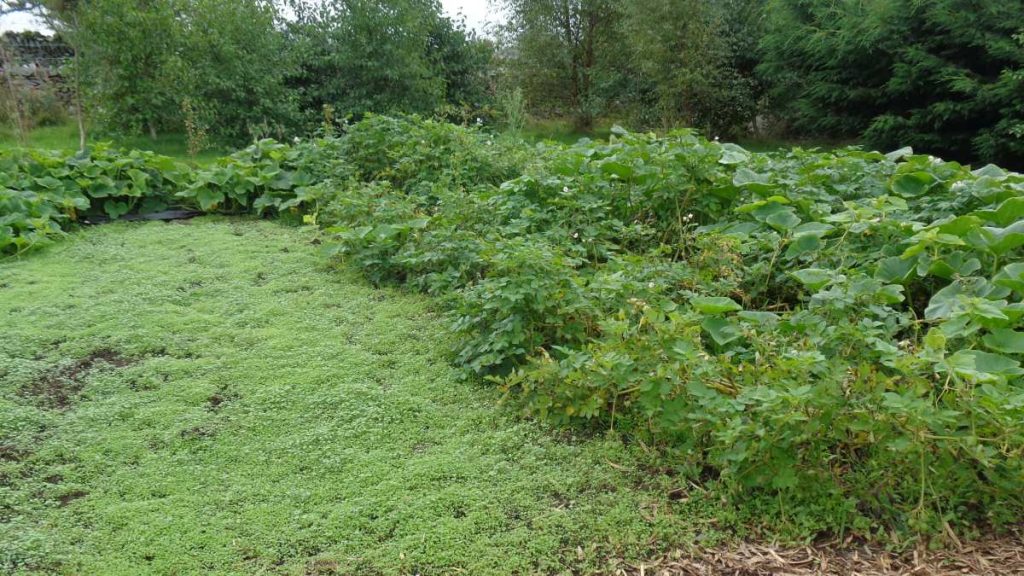 Chickweed with a little mustard by the potatoes which have blight

I expanded the growing area a lot this year since I had concerns about what was coming with food supplies. Panics over loo rolls, press warnings we were going to have massive problems with imports due to leaving the EU and, of course, the pandemic.

Like fire insurance, my ‘food supply insurance’ is something I’m pleased not to claim on. Quite what I’m doing next year, I don’t really know. I could let the new potato patch go back to grass but I could need it.

My answer is to sow green manure mustard. I’d got a large bag of seeds in store and whilst I thought they were most likely past it, worth a go.

I took a look and the patch was covered with seedlings. Fantastic but they’re not mustard. It’s the blasted chickweed. Very few mustards have come up. I’ve got some fresh stock and will whiz the Mantis over the surface before resowing. Looks like the chickens will get a treat with the old seed.