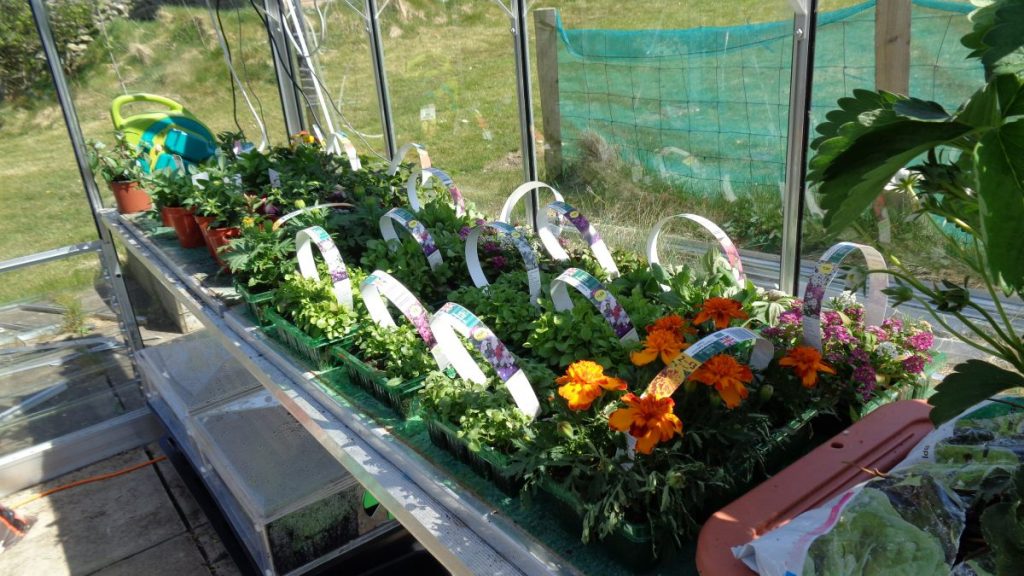 Most of the Eden greenhouse bench occupied with flowery things!

Val’s determined to put together a good show this year. Last year wasn’t the best what with lockdowns keeping us from the garden centres and being up to our necks in work. A lot of the growers have been cautious this year. An awful lot of plants ended up being composted last year as garden centres were closed down just as the season started.

So we’re working on the principle that if something is there, buy it quick and grow it on before it’s gone. There’s no certainty that more stocks will be coming.

Thus far she’s got the lion’s share of the Eden greenhouse bench and she’s even taking over the coldframes for hardening off. 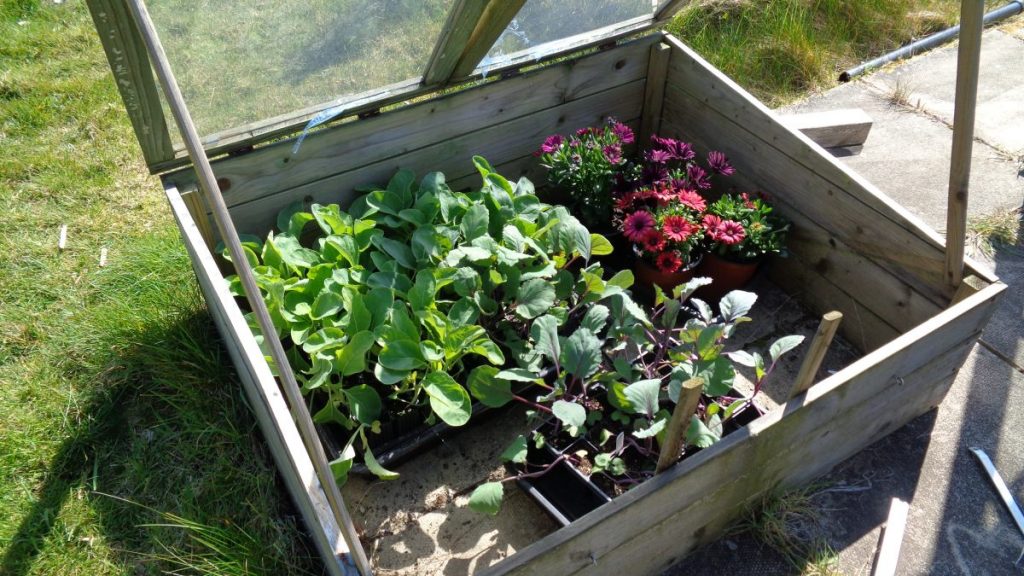 Brassicas hardening off in the coldframe – note the flowery things sneaking in!

Planted one of the raised beds with Hispi and Red Acre cabbage. Hopefully we won’t have the cabbage white plague we had last year but I can always fleece them if we do see a lot of the pretty pests fluttering around. They’re both fast, smaller varieties so should be OK with a relatively tight spacing. 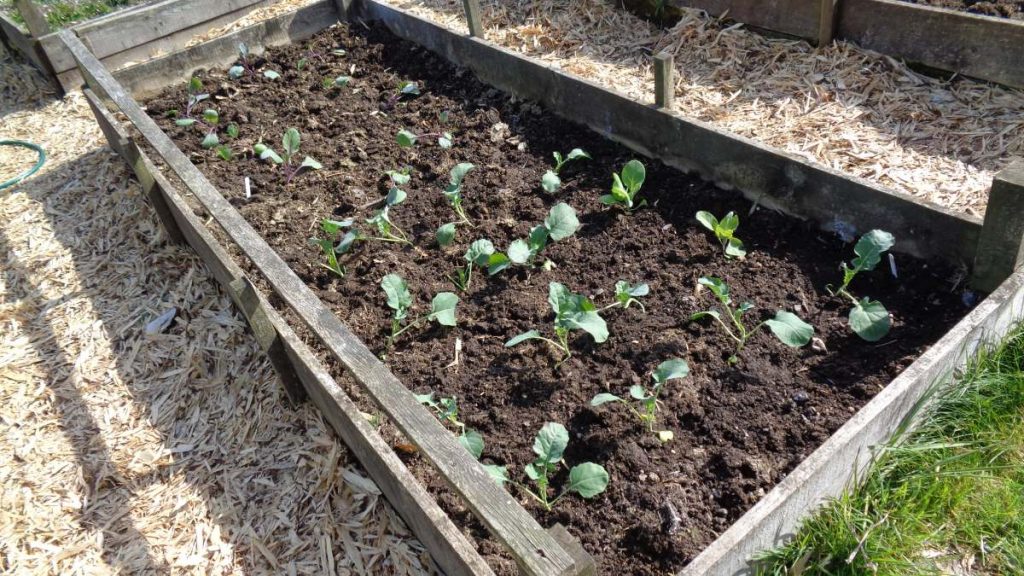 I’ve a lot of calabrese, sprouts, cabbage and cauliflowers ready to plant out now they’ve hardened off in the coldframes. 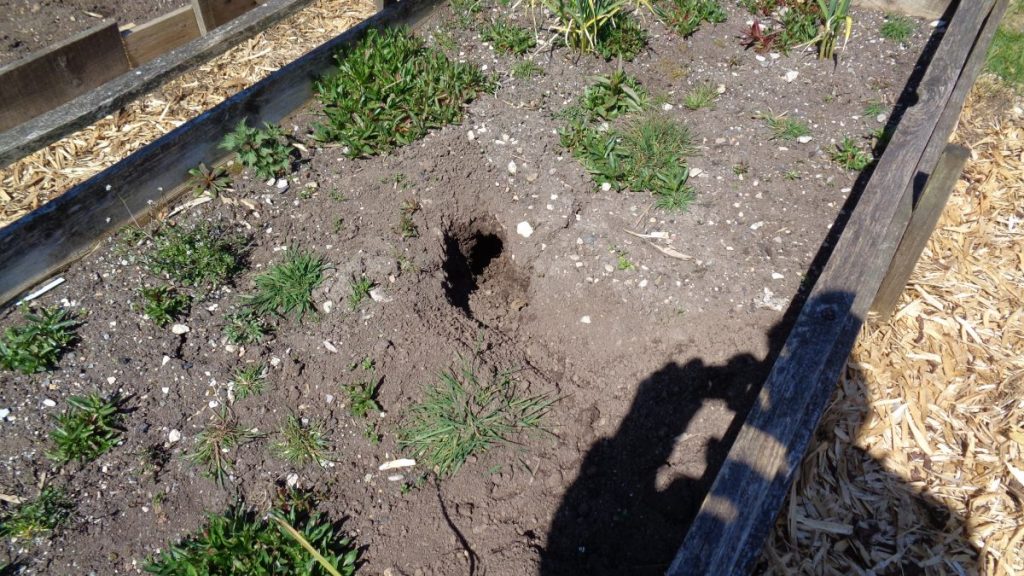 Start of a rabbit burrow. Cheeky bunny cannot make its home in my raised bed!

We seem to be getting a bit of a rabbit problem. They’ve not been a bother in the past as my rodent control operatives kept them under control. Unfortunately, like me, they’re not quite as energetic as they once were.

Between escaped sheep and rampaging rabbits I’m thinking about putting fencing all around the veg beds. I could add windbreak netting as well which would help growth as windchill reduces the effective temperature on the plants.

The polytunnel is coming together. The potatoes are looking well if a lot later than I thought. The elephant garlic is finally showing and the lettuce recently planted are growing ahead.

I recently posted an article on chelated micronutrients which Barry Langdon of S-Chelate helped me with. He’s kindly sent me some packs to try. I watered all the strawberries with the made up solution along with the potatoes and garlic. Because their growing medium is very much commercial potting compost, I think the micronutrients will have quite a good effect.

I’ve a lot of Hispi seeds three years past their sow-by date whose germination rate is falling now. Sowed an entire pack in a half seed tray, maybe I’ll only get a dozen come up out of 50 but so what? They’re basically free seeds now. I might try using a trough if Val doesn’t want it for flowers and densely sowing like microgreens. Can’t say I like microgreens but the chickens do. We get really well flavoured eggs with deep yellow yolks because they get a lot of quality greens.

I’ve really messed up my peppers this year. My fault and such a rookie error. I sowed up a Bustaseed tray with 2 strips of chilli peppers and the rest with sweet peppers. California Wonder and Mavras.

So far so good, four chilli peppers came up and one California Wonder pepper. For some mad reason, I forgot to check & water for a few days so the tray dried out. The seedlings survived but not the rest. I assume they started and then died in the drought.