Update on a Busy Week

The last week or so has been interesting. In one day we had rain, hail, snow and some lovely sunshine! At last the weather seems to have turned for the better although it’s still pretty cold at night. An opportunity to finally get on with things outside. 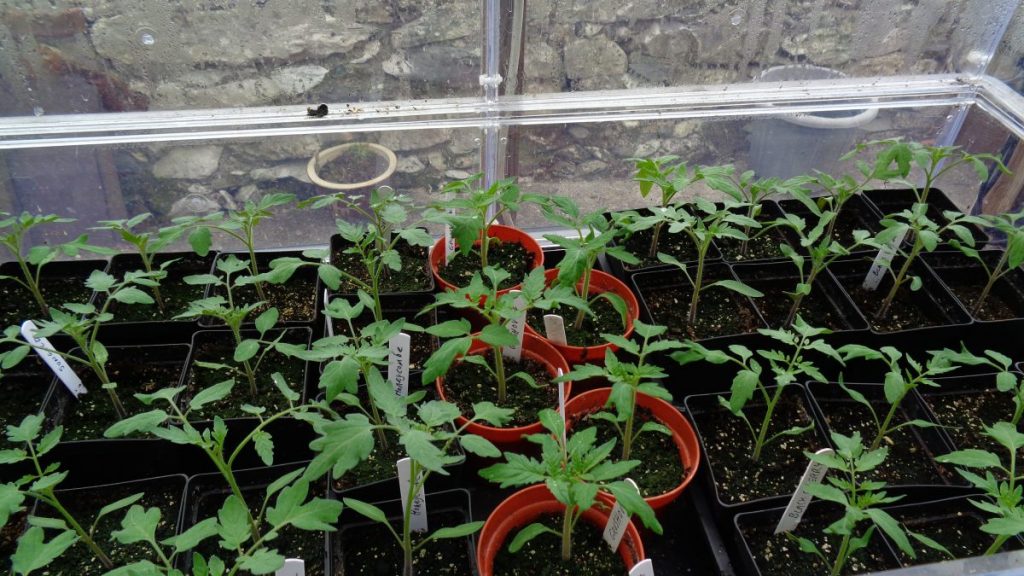 In the potting shed the tomatoes are really doing well. Had to add another tier to the Vitopod as the plants were pushing the lids. It seems the 12 hours added lighting per day regime is doing the job.

The Sarpo Axona maincrop potatoes have gone in, the last three rows of the potato patch. The earlies are already just starting to pop the odd shoot up which bodes well for the crop.

It’s been dry enough to cut the grass and the clippings are piled up ready to be untilised in the new squash bed. This is being created in the same way as the potato patch. A layer of cardboard – just the unglazed brown board and a layer of grass clippings and green materials.

This is all covered with weed matting and the worms will have a feast in the dark under there converting the waste materials into decent soil. It won’t be that deep so the squashes that will be planted through the matting will each have a cube dug out and filled with compost.

The last of the sheep manure mountain is going into the compost bins in the field plot. This is combined with green waste etc. to rot down for use later in the year. 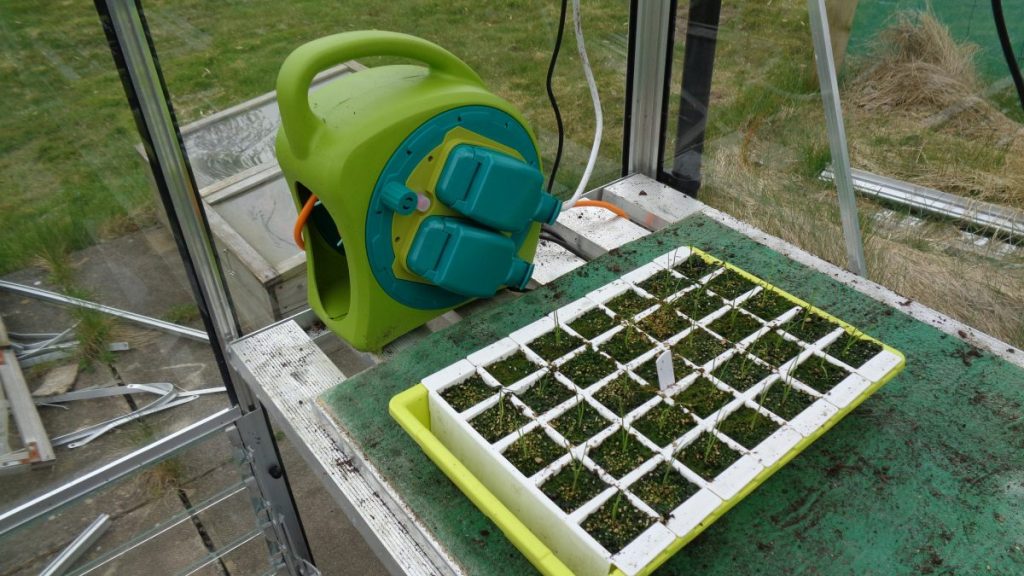 Our main electrical system tripped a couple of times for no apparent reason. Then I found the secondary system that feeds the outside had tripped and the freezers were without power and had been for some hours. Panic Time!

Worked out it was water getting into the plug in the Eden greenhouse that feeds the heating pads. Replaced the normal extension cable reel with an IP54 weather protected extension reel from Aldi that should sort the problem.

Bit of a fiddle to sort though, the plug has to be taken off and the cable fed through the staging, around the greenhouse (held by cable clips) and through to outside. Under a slab on the step and through a plastic tube to the weatherproof outlet on the old cowshed wall.

It’s well over 30 days since we had our full Covid vaccine course and case rates are very low in our area which gives us the confidence to shop more. Picked up some 40 litre bags of compost which Val can manage – easier for me too with my back, truth be told. Then some flowery things that are being coddled in the greenhouse for a couple of weeks. 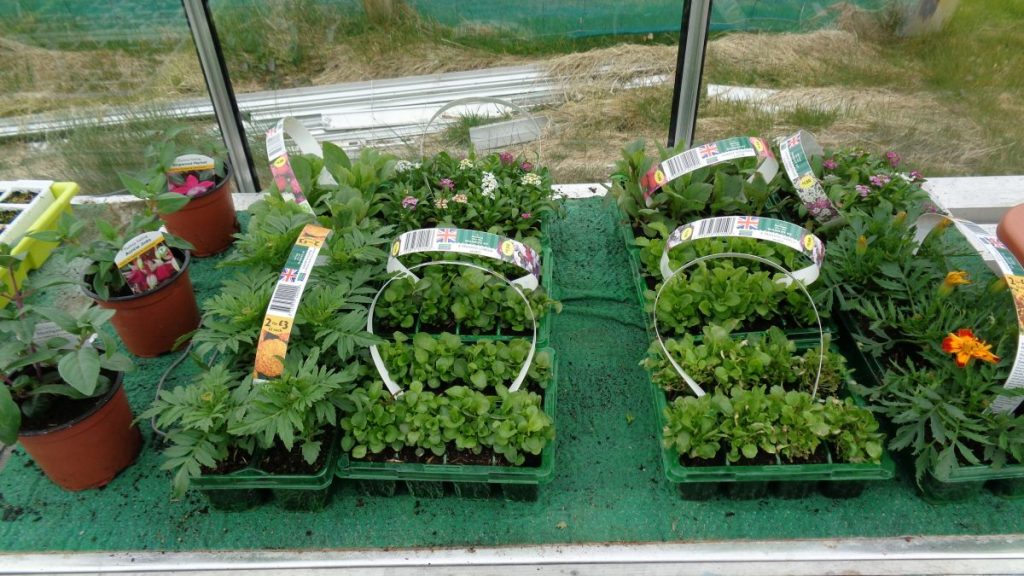 I wonder if things will ever be the same. Half of Caernarfon’s shops have gone according to my daughter who ventured to the bank in town. Val says she’ll stick with the convenience of deliveries for the supermarket shop. She’s calculated paying for delivery is about half the cost of fuel in the car. Makes you think.

The first row of peas are in and the Karmazyn broad beans planted out in the walled vegetable garden. The direct sown Witkiem beans are yet to show their heads. Hope they show soon,

I ordered some elephant garlic back in January from Marshalls which finally arrived at the end of February. To catch up with it I planted in pots in the greenhouse but after a month not a shoot.

Strangely they’re putting out good roots but no tops. At over a pound a clove, I have to give them every chance so they’ve been planted in the polytunnel. We’ll see if they develop.

Another four hanging baskets, 24 plants, of Mara de Bois planted up in the polytunnel. Set up some cheap racking I’d got knocking about in a shed for the strawberries in pots and troughs. 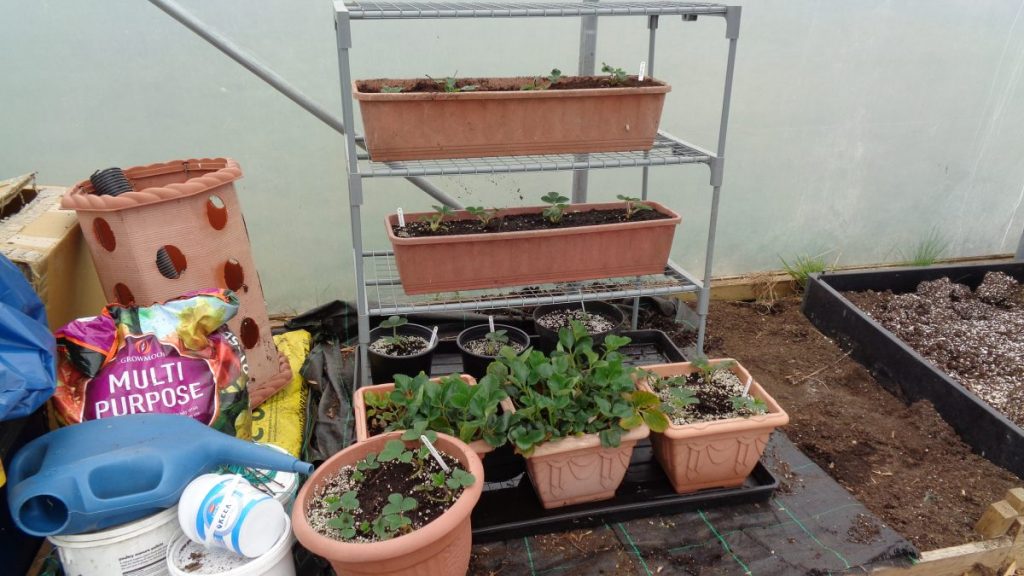 Strawberries in pots and troughs on racking. The bed to the right has been moved left up to the racking. Tidying continues!

I’m having a sort out in the tunnel. Moving a couple of raised beds and generally tidying up to make it easier to manage. More work than it seemed when I started but part of my plan is to install drip irrigation on the centre bed and the right hand side bed.

To do that I need to take out the raised bed from the right hand side. The bed holds about 150 litres so a bit of work to empty and move. It would have been a lot faster a couple of years ago but my back ain’t what it was. Much Ibuprofen was taken that night.

The polytunnel had quite a lot of algae growing on the skin, it didn’t get a proper clean last year. Being as it hasn’t much growing at the moment and was clear, I took the opportunity to spray with Algon. Left it smelling like chips!

2 comments on “Update on a Busy Week”