After some really pleasant weather the jet stream has twisted around and cold frozen air from Santa’s lair is pouring down over the UK. Bitter winds and snow flurries. 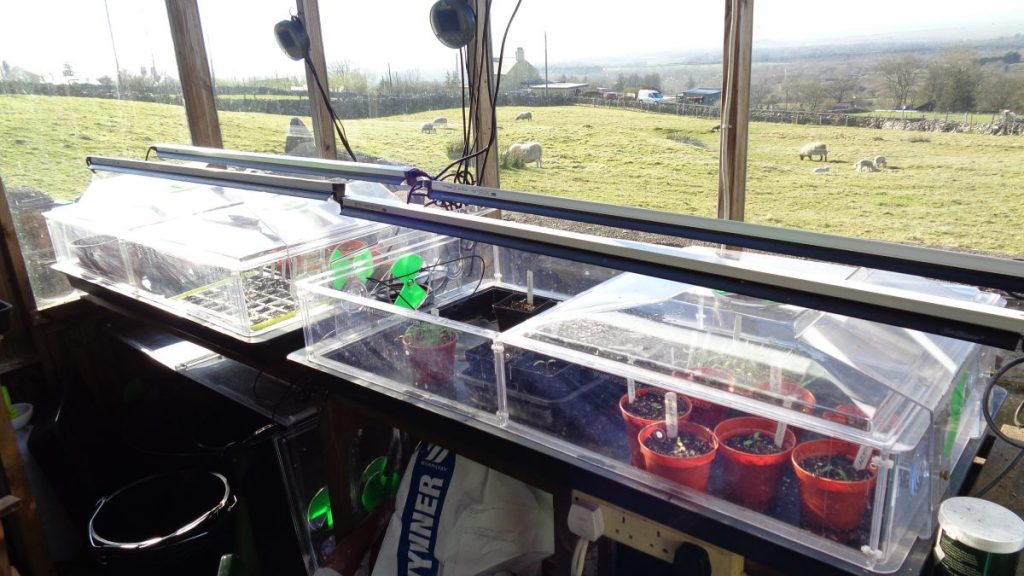 Vitopod Propagators with lights in the potting shed

I’ve got all the first batch of tomatoes potted on and sitting under lights in the propagators. As usual, they’re planted deeply, halfway up the stem towards the seed leaves. This planting technique gives stronger plants. It works well for the leafy brassicas, too. Especially if the seedlings have grown a little leggy.

The Karmazyn broad beans that I was worried about not germinating are doing quite well. Sown into pots with a little bottom heat about half have broken the surface already after 10 days. The Witkiem beans sown outside a week earlier have yet to show.

The peas started in half seed trays are showing too. They’ll be going out as soon as this cold spell has passed.

I used to think grow lights were not a very good idea but things change. The benefits of increasing the amount of light for growth are substantial. I use T5 fluorescents which give off heat as well as light which reduces the amount of power used by the propagators, mitigating running costs.

My new salad and vegetable planter uses the same sides and lids as my Vitopod propagators which gave me an idea. I could buy the supports that go onto the side and add lighting to it. The planter is unheated so possibly things would benefit from the warmth as well.

I’ve got some T5 lights I picked up at a bargain price on Ebay a while back Got them for a minimum bid! I’ve also got a number of aluminium bits about and it might be possible to build a support frame instead of buying supports. Now I’m a poor pensioner, best to watch the pennies! 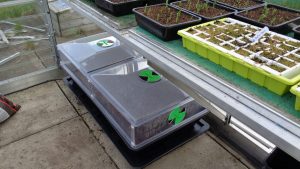 Salad & Vegetable Planter set up in the Eden greenhouse

I’ve set up the new salad and vegetable planter planter in the Eden greenhouse. There’s a product review online here.

Back last year, realising the lockdown was coming, I stocked up on potting compost from the local garden centre. It’s amazing how quickly it goes and, since the garden centres have reopened, I decided to grab some more.

As we’ve had our vaccinations and now enjoy some protection from the plague, decided I didn’t need the full NBC suit. Dressed just in a mask and slathered in sanitiser I headed to the garden centre. They insisted that wasn’t enough so I put some clothes on as well 🙂

Loaded up with half a dozen 56 litre bags which went into store. All was well until the evening when my back complained. Had to take it very carefully the next day as I knew it was on the edge. Frustrating. I’ll be glad when I can get back to seeing my osteopath once more.

I’ve mentioned the Bustaseed modules frequently since I started this year’s sowing. There is a review of the system on the site here: Bustaseed However, I came across this video from Ireland that explains them well. You might find it helpful.