The weather is pretty fair for the time of year and I’m trying to make good use of it. After what seemed like an endless winter, it’s wonderful to see the auto-vents opening up the greenhouses when I look out in a morning.

I’m not a morning person, more a creature of the night, and an hour or two of sunshine is more than enough to over-heat a greenhouse and cook the contents before I get out to open the lights.

I use the Bayliss XL auto-vents which are strong enough to hold the vents shut in windy weather. Another of the joys of living where we do. You can get automatic openers for the bottom louvres but I haven’t. Maybe I’ll treat myself.

In the polytunnel for temperature control I’ve got my solar powered fan cooling system. It’s not quite powerful enough but it keeps things under control until I get up there to open everything up. This year I’m planning on getting the Mark Two, High Power version going. The larger solar panel and two car radiator fans have been in the shed for over a year now! 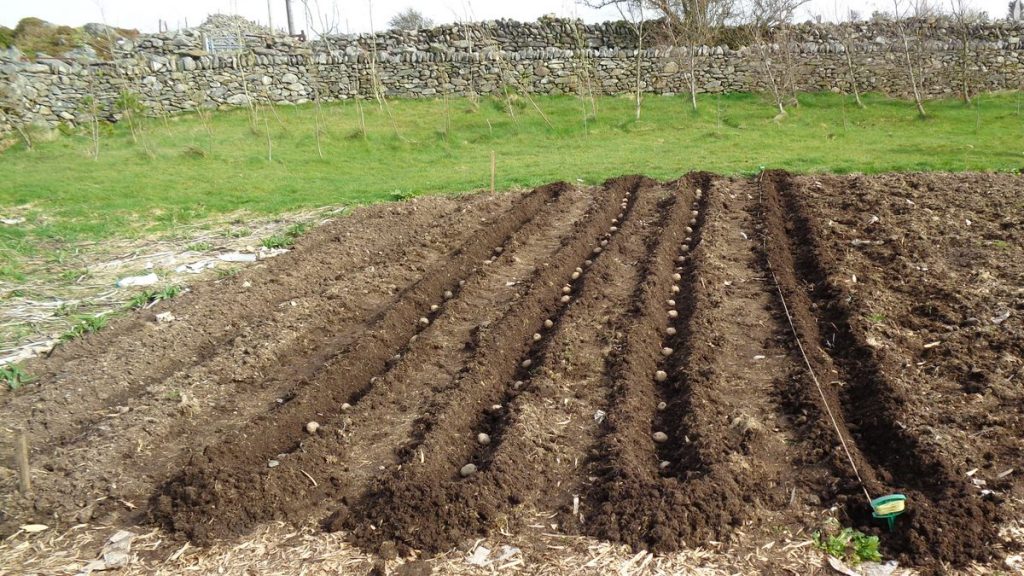 Another 4 rows of potatoes being planted

Another four rows of potatoes went in to the new potato patch and a raised bed planted up. Here’s the state of play, counting the rows from left to right.

Raised bed planted up with Charlotte and Mary’s Rose, both second earlies. Still a few tubers of Mary’s Rose to plant.

The maincrops, Alouette and Sarpo Axona, will go in the potato patch next. There’s a lot going in but we’re growing for four adults and a child that eats more than seems possible before shooting up an inch overnight. He demolishes a plate of chips as a snack to hold off starvation before tea time. And he’s as skinny as a rake!

Last year the strawberries were mediocre. In large part it was my not giving them enough attention between my back problems and work commitments eating my time. Anyway, decided to start again with fresh stock and planting.

The first batch of new bare rooted plants didn’t take. My fault. I didn’t get on with planting them up promptly and they died. Total waste and I’m kicking myself but learned my lesson.

This time I ordered 60 plants of Honeoye and 24 plants of Mara de Bois which will give me 14 hanging baskets of 6 each. The Honeoye arrived promptly but still no sign of the Mara de Bois that are overdue from Thompson and Morgan.

When the plants arrived in the afternoon I immediately put them in a bucket of water to which I’d added SM3 seaweed stimulant. This is to re-hydrate the plants and the seaweed liquid should give them a little boost.

The 16” hanging baskets were filled with a mix of multi-purpose compost, perlite and added slow-release fertiliser. As the plants went in, took care to spread out the roots to make maximum use of the space available in the basket.

The supplier, Gardener’s Dream, actually sent 77 plants so the extras went into pots and troughs. Always useful to have a few spares anyway.

Leave a Comment Here on Spuds and Strawberries Cancel reply