It’s been a busy week, so a quick catch-up as to where things stand. Clocks go forward tonight so an extra evening hour to play out!

The potatoes are finally breaking the surface, way behind what I expected when I planted them 8 weeks ago, but at least they’re making a start. I hope! 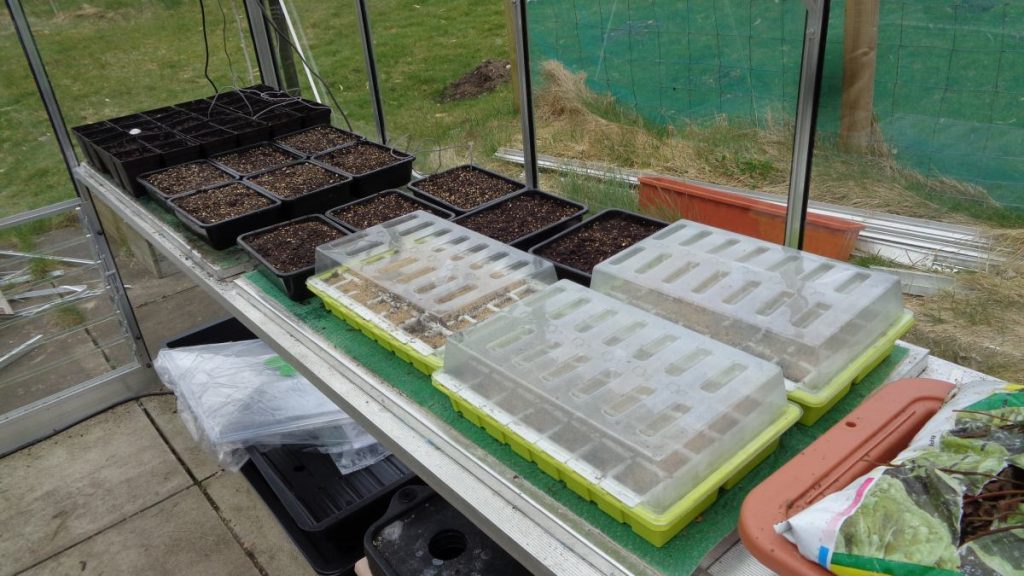 Beans Peas Leeks in the Eden greenhouse on heating pads

The propagators are nearly full! I’ve set up supplementary lighting on one of the Vitopods which is running from 7am to 7 pm

Every year I say I’ll limit the number of varieties to just a few and every year I grow far more than planned. If I live to be 100 I still won’t have scratched the surface, too many tempting varieties in the catalogues.

I’ve sown all these singly in Bustaseed modules. I really like the Bustaseed system which has been further improved this year. The previous black plastic trays that hold the growing cells were a little flimsy and could distort if they got too hot. They now have a much better quality yellow tray – not subject to heat problems and much more robust so they should last a lot longer.

Gherkin Partner I’ve sown those in pots. Lovely flavoured small fruits, beloved by the grandson as a snack.

These are sown singly in Bustaseed modules in the Eden greenhouse on the heating pads.

Leeks: Windermere from Medwyns of Anglesey and Leeks: Below Zero from Suttons

Parsley: Moss Curled in 6” pots in the Vitopod.

Broad beans: Karmazyn in pots with bottom heat to 15ºC on heating pads. I thought about sowing them directly but I’m not sure about the seed quality. This way I’ll know the germination rate and just plant out the ones worth it.

Peas: Kelvedon Wonder in half trays on the heat pads in the Eden.