It’s been a slow start this year for me but we’re moving ahead now. Although it’s a lot better than it was, I’m still having to be careful with my back. I don’t want that to go again, thank you. 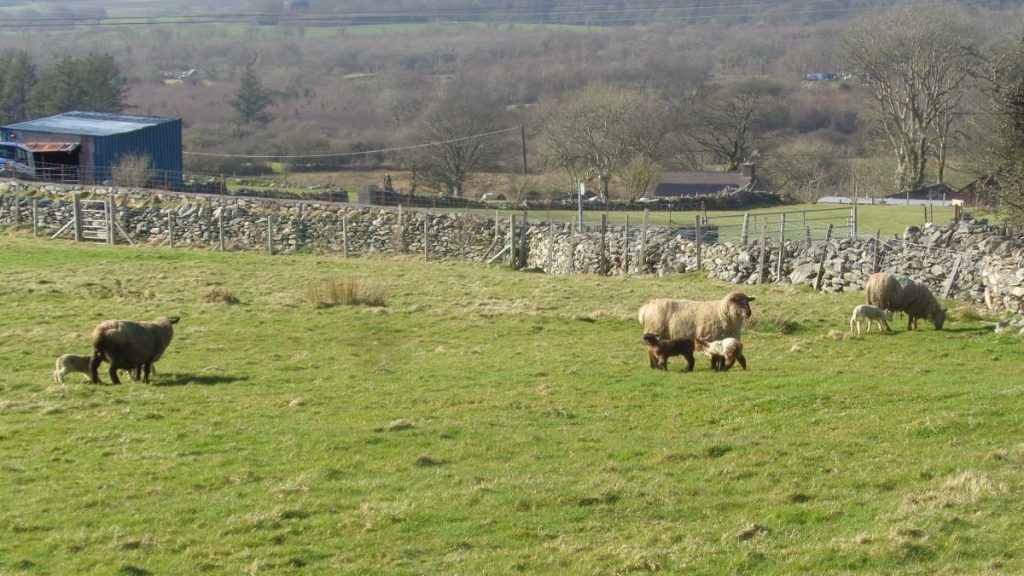 New lambs with their mums in the front field. The blue building in the top left is the lambing shed.

One of the features of living where we do in Wales is sheep. Our neighbour down the hill, across the road keeps a flock and at this time of year he’s out in the lambing shed at all hours of the night, light shining at 4 am. At least I don’t have to go out to check my seedlings in the middle of the night.

It really marks the start of the year when the first ewes come out into the field with their lambs. Lovely to watch the lambs gambolling and playing as they grow. At this stage they have an endearing habit of just flopping down going to sleep wherever they happen to be when tired. Just like any toddler.

The big benefit for me comes when the lambing shed is cleaned out and he comes over with tractor and trailer loads of strawy sheep manure. Manure doesn’t add huge amounts of nutrient to soil compared with a bag of fertiliser but it adds life. It’s really noticeable how the structure and life in our soils has improved from the last massive loads in 2020. Mountains of muck 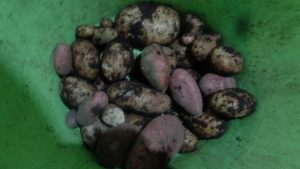 The first ‘free’ potatoes – later harvested the same again. Sloppy harvesting by me.

Over in the walled veg garden the area that had potatoes last year is being prepared. It was getting weedy and the first job was to strip off some clumps of grass and dig out the docks. This revealed quite a few potatoes that were missed last year. Surprising number are in very good condition and a few kilos are welcome for the table.

Having got that clear, spread about half the pile of rotted sheep muck from behind the brassica cage onto the patch. That pile has really rotted down well and it’s chock full of worms. Always a good indicator of soil health, the more worms the better. Worked out about half a barrow load per square yard.

Next job will be to rotavate it and then lime it. Normally I wouldn’t lime and apply manure in the same year but having so much manure available, it’s getting used. Especially with the promise of more to come.

Once that’s done, the rest of the pile will be spread over the vacated half, a rinse and repeat job.

Another Pane Bites the Dust 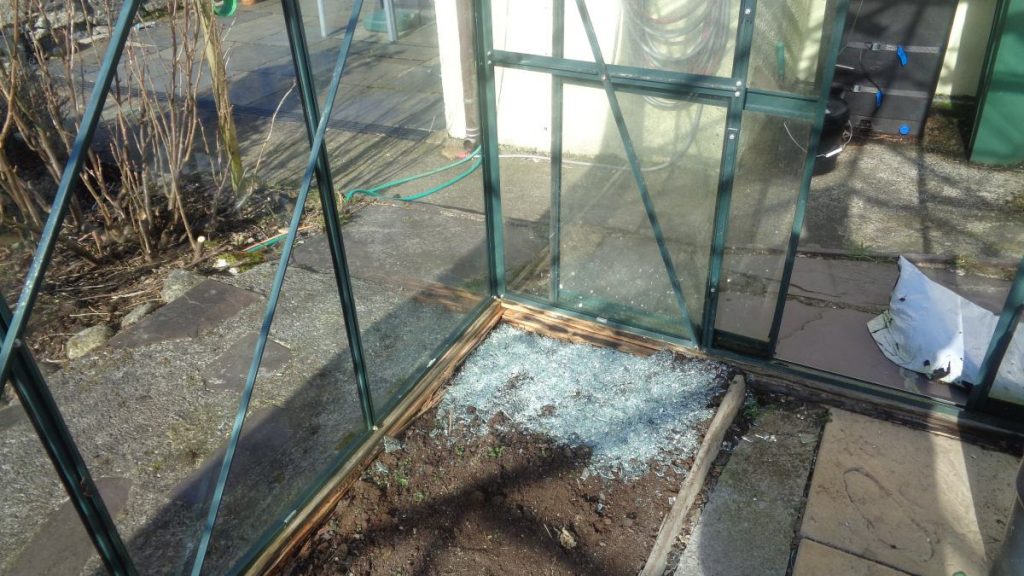 Broken glass to clear in the greenhouse.. again.

A glass panel exploded in the Vitavia greenhouse. If you’ve ever seen tempered safety glass go, you’ll understand why I say exploded. Luckily I had a spare of the right size but still a mess to clear up.

I think the problem is that the frame has distorted with the storms and winds we ‘enjoy’ here. Then it puts pressure on the side of the glass and bang, it goes. I think the Vitavia is a great greenhouse but our conditions are challenging.

It’s the same pane position that has gone twice before, if it goes again I’ll see about replacing it with perspex or something. I did wonder about replacing the greenhouse as I’ve some money coming soon but can’t quite justify it to myself.

I had some late sown and planted leeks in the side border of the walled veg garden. They didn’t amount to much, but a small leek is better than no leek. They were starting to bolt so harvested them and turned over the soil, hoeing off the weeds were starting to grow. Added some Growmore with extra sulphate of potash and then did the shuffle over to firm the soil. Using a draw hoe I drew four drills, dropped in the seeds and pushed the soil over them. A quick walk up the rows to firm the soil on the seeds and job done.

These are Broad Bean Witkiem, not hugely yielding but fast and flavourful. With a little luck I’ll be enjoying them by the end of June.