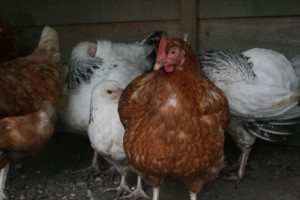 I’ve been reading pig & poultry marketing again, a fascinating window into the commercial world of large scale food production. Now I had an email the other day asking what the pig keeping article had to do with allotments.

Well the answer is this. Allotment holders grow their own fruit and vegetables and poultry keepers eat their own eggs if not their own poultry meat. So it’s a reasonable assumption that they’ve got an interest in where their food comes from outside of those we things we can reasonably produce ourselves.

The biggest motivator to growing organically is fear. Fear of what the pesticide residues may be doing to us and more importantly our children. Yes, we have general environmental concerns but I reckon it’s that personal fear that really motivates.

Animal welfare means little to people who have had no contact with them. It’s hard to emphasise with a prepared joint of meat or chicken. But once you’ve seen how a flock of ex-battery hens rush to you as you go into the garden or seen the different personalities (both good and bad) they have it’s hard to look at a cheap chicken and not feel for them.

We’re a strange society in Britain. We say we love animals and those who mistreat their dogs or cats are reported in the paper with almost the same disgust as a paedophile. But in the main we happily buy the products of a farming industry forced into systematic cruelty and ill treatment by economic pressures.

I honestly believe we can do more for animals by Europe wide animal welfare regulation, placing all the farmers on a level economic playing field. That’s why I strongly support Compassion in World Farming. I think they do and have done more for more animals than the RSPCA by pushing standards up for millions of animals. That’s no slight on the RSPCA, by the way.

Now this brings me nicely to an article in the magazine about an award winning company in the poultry business. Now these aren’t the biggest in the game by any means but guess how many eggs they produce a week?

So, this one company that I suspect is fairly representative of the industry has 235,000 birds in total and 60% are battery. That’s despite Hugh Fearnly-Whittingstall and Jamie Oliver using prime time television to make people aware of industrial animal farming.

Incidentally, “enriched colony” is another way of saying enriched cages which will come into force in 2012 across Europe when the conventional cage systems are banned. Oh, and if you think they’re luxury – the minimum space per hen is just 750 sq centimetres per bird. That’s slightly more than a sheet of A4 paper. Yes, it makes me spit too.

Apart from lobbying for regulation (please do take a look at Compassion in World Farming) I think the best thing for the welfare of hens is the small scale, back garden keeper.

Not because they keep their hens as pets so much as the influence they can have on others. I’m not suggesting they preach at the neighbours but by introducing them to their hens and the wonderfully different taste of really fresh eggs, perhaps we can drive the market further away from battery production as people know and demand quality of produce and realise these are living creatures that we should respect.