When I dropped the Merry Tiller into the shop to sort out, I thought it would be a quick, cheap fix. Oh well, like so many of my plans… 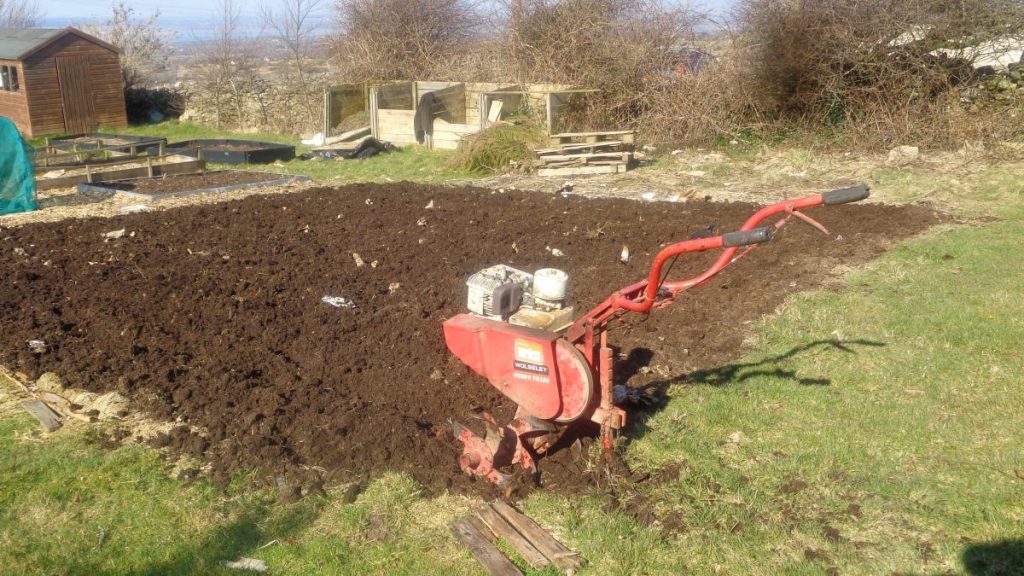 The Merry Tiller Rotavator after preparing the new potato patch

The shop I use in Tremadog, Peirianwaith Eifionydd Engineering, (you need your teeth in to say that!) doesn’t half do jobs. They really know what they’re about and never cut corners in my 10 year experience with them. The bill details the work carried out. Plugs and points, air filter, points plunger, carb clean and new diaphragm, fuel tank gasket, regrinds on the valve and a few other bits on top!

All in all, it came to £220 odd, which was a bit of shock. On the plus side, it starts first pull and runs like a dream. I don’t think it has ever run so well since I had it. Strange, I can get my car serviced and an MOT for less! But the cars useless at tilling.

Now I don’t know how much a Merry Tiller sold for in 1976 when mine was produced but I paid £80.00 for it second hand back in 2005. It gets a shop service about every 5 years, not a bad service interval. Overall, I reckon great value for money.

I’d hate to have to replace the Merry Tiller, it’s just such a perfect machine. The blades are strong, thick steel. If it hits a rock, the rock may break but the tines won’t bend. It’s great when going through dense clay or stony soil as we’re blessed with now. The weight of the solid tines on the front helps it bite and holds it down.

Looking at something like a Honda FG320, it’s a bit like comparing a normal road car with an old Land Rover. I’m sure the Honda is an excellent machine but I seriously doubt the tines would survive our rocky soil. They go for around £700

The best spoken of modern rotavators by small market gardeners has to be the BCS range. But we’re moving up to near the ‘£3,000 and over’ price range now. Even if cost was no concern whatsoever, I’d rather keep the Merry Tiller. For an allotment or large plot, it’s just perfect in my book.

In 2019 I layered cardboard and grass clippings over the patch. Then, at each planting position a hole was dug around a a foot each way and deep. This was filled with good compost and the squashes and pumpkins planted. The surface was covered in good quality weed mat. No weed problems and plenty of food resulted in good performance.

The next year I again planted squashes in different positions in the same are. Instead of providing planting points in filled holes I relied on layered compost and green materials under the card. The results were not as good. Reasonable, but no cigar.

This year a layer of sheep muck was applied and the covers replaced. This encourages the worms and the soil is much improved now. The last task was to rotavate it all. I went over it about three times and now it’s ready for planting later this month.

New grassland can be difficult for potatoes due to wire worms but since this is effectively in year three I’m not expecting problems.

I took the opportunity of fair weather to plant out the shallots. I’ve planted 3 varieties; Jermor, Red Sun and Golden Gourmet. I’ve also planted the Sturon onion sets and I’ve still got some red onion sets to go in, Electric.