As we say goodbye or perhaps good riddance to 2020, it’s time to look ahead and get prepared for the coming year, 2021. Let it be better! 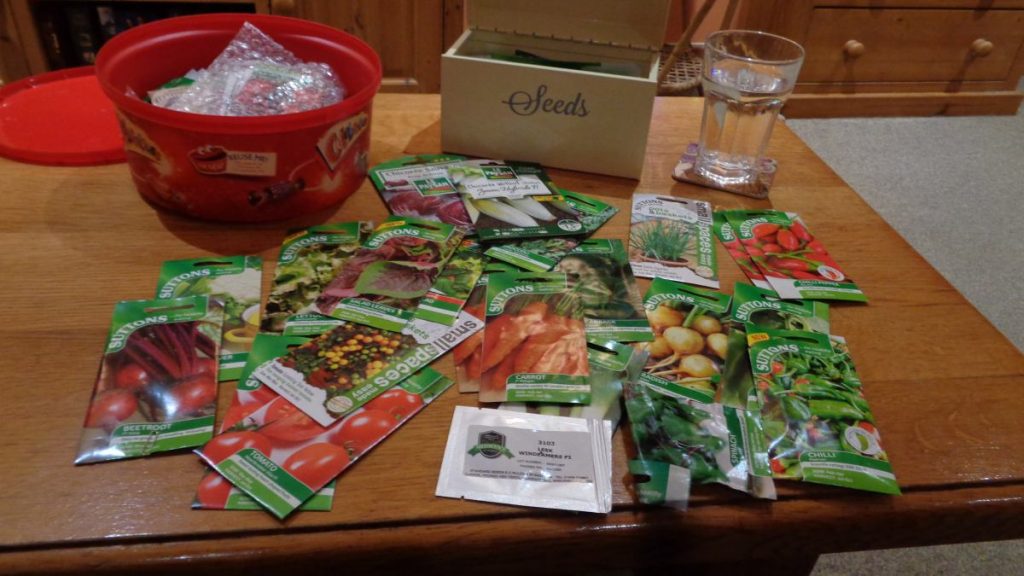 Sorting Seeds – Just the job when it’s storming outside.

2020 has at best been difficult for us all and disastrous for many. We’ve coped and avoided catching the virus but it’s been stressful. Plans went out of the window and at times panic was the order of the day! 2020 is not a year I want to repeat, it wasn’t without its good points though.

One success of the year was my new book, Dig for Victory. Sadly I hit problems with the publisher at the last minute so I ended up self-publishing it. It took longer but the end result is exactly what I wanted. Happily I’ve had lots of positive comments from readers which is great. And at least the printers weren’t bombed out – a problem that was common in 1941.

The weather was weird, we had a wonderful spring that was more like summer. Then summer ended up being more like spring should be. It never seemed to pick up until winter arrived. Confused plants bolted and mould was a never ending problem in the greenhouses and polytunnel with the cool temperatures and high humidity. But we got there.

I can’t control the weather next year but I can get as prepared as possible. My seed potatoes are on order and should be arriving in January. Unless the weather gets dramatically cold, I’ll be planting a small bed in early February in the polytunnel. There should be a few to start lifting by mid-April. If the weather gets really cold, I can put them under a fleece blanket until it warms. I’ll plant the rest out mid-March in the new area I’m preparing in the field plot. Big thanks to Potato House for their efficient and helpful service.

I’ve got the seed order sorted. First job was to decide what I wanted to grow. I don’t want to take on too much next year so I’m keeping things simple. For example, growing sweet potatoes here with our climate is a lot of work for little reward. Aubergines are very iffy too. Since we eat very few and they aren’t exactly top favourites, I’ll give them a miss.

Having made a list of what was wanted, the next job was to look at what seeds I have in the tin. Kept dry and cool, those half packets should germinate as if the pack was opened fresh. There’s a guide to seed life on the site here: Seed Storage & Longevity Lifespan – How Long Seeds Will Keep For

The order wasn’t that big, I’ve most of what I need ‘in stock’ but the biggest expense was some new strawberry plants. I fancied trying some new varieties – Hapil and Honeoye. They’re both new to me and fairly recent introductions that are being well spoken of.

Most of the plants will be going into hanging baskets in the polytunnel. They do really well in there, sheltered and warm out of the reach of slugs and protected from pigeons. It’s not just us that love strawberries.

There’s another benefit to growing them in hanging baskets, it’s ‘free’ space. Covered growing space is expensive and it’s important to get the most out of it you can.

I bravely ventured out of the house and went to our local garden centre to stock up on potting compost. Shopping nowadays is either online or feels like a commando mission behind enemy lines. We’re going to be in a lockdown after Christmas. In fact, looking at the figures in Wales, I’m surprised we’re not in lockdown now.

In our local, rural area of North Wales the figures are quite low but in the more densely populated urban areas of South Wales they’re terrifying. I’m very aware that they can shoot up very, very quickly. Despite it being higher than in the first wave, I think a lot of people are just ignoring the rules now. After all they’ve not caught it yet and there’s a vaccine so they think it’s all over. If only it were so.