As we reach the end of the year, I’m looking at the effects of using biochar as a soil amendment.

I’m happy to say that the initial rush of sales for my new book is slowing. Obviously I’m really pleased it’s gone so well but it’s nice to have some time to myself again. Not to mention having the dinner table clear of books and envelopes.

There’s a bit of a break in the weather, actually it’s a few days of unseasonably warm weather and calm. A chance to get on with putting things to bed ready for winter. Quite what the winter weather will be is anybody’s guess but I’ve a feeling it could be cold one. So prepare for a heatwave! 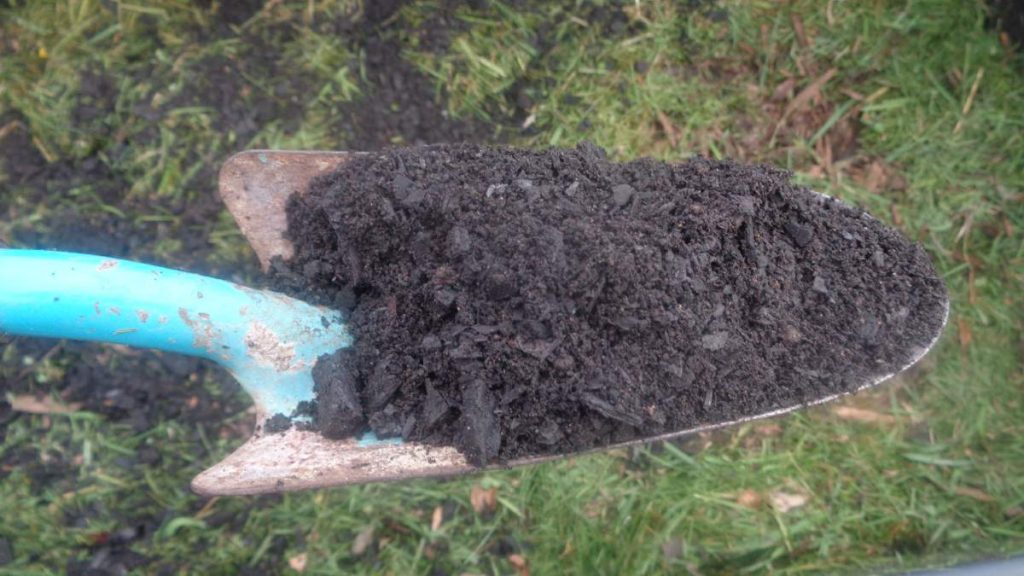 A trowel of Biochar

One job down was the centre bed in the polytunnel. For the last few years I’ve grown sweetcorn in that bed. Initially the soil was turned and then a load of compost added. Pre-planting a good couple of handfuls of blood, fish and bone added to the soil to provide the major nutrients in balance along with an extra helping of nitrogen with sulphate of ammonia. Sweetcorn really benefits from high nitrogen to fuel its fast growth of stalk and leaf.

At end of season, the bed was cleared and some soil removed and replaced with compost and fresh soil. Fertiliser added as above and another excellent crop followed. This year was different though.

I followed the same pattern but added a goodly amount of biochar which I had previously charged by adding an amount of fresh chicken manure, compost, urine and chopped up comfrey leaves to it and soaking for weeks.

By all accounts this should have resulted in a significant improvement in the soil and good growth. Not for me, though. The plants were stunted, growth and crop poor despite my trying to rescue the situation as things became apparent by adding fertiliser. I even tried adding trace elements, magnesium and Miracle-Gro liquid fertiliser to little result.

So the soil has been removed to a depth of six inches and spread onto the main plot outside. Then a good layer of rotted sheep manure was spread onto the bed and topped up with soil from another part of the vegetable plot. This was forked over to open the soil lower and mix.

Hopefully by next season the worms will have done their work and the bed will again produce an excellent crop for me.

Before getting some biochar and using it, I had read up on the subject quite extensively. The theory makes sense, environmentally very sound. I’d found peer-reviewed scientific papers that showed positive benefits which really convinced me this stuff could well be a ‘black gold’.

I was quite excited by the possible benefits both as a natural soil amendment with long term benefits and the potential to improve depleted poor soils. But I’m a gardener not a research scientist. As far as I’m concerned, it’s a product I’m not minded to try again. The results were negative for me. Perhaps I missed something or it’s another factor I’ve not taken into account, but I’ll stick with methods I know do work.

Articles on Biochar on the Web Site

Leave a Comment Here on Does Biochar Work? Cancel reply