Taking Stock of the Plots

We’re starting to harvest seriously now, despite things going off track this year. I never thought my back strain causing acute sciatica would last for as long as it did for starters. Then as that problem eased the plague arrived, disrupting everything.

It’s humbling that so many people trust me to guide them through growing their own for the first time by buying my books. Ironically, processing all those extra book orders and answering queries took so much time I couldn’t get on with growing my own produce as I hoped. Mustn’t grumble!

Then finally, delays caused by finishing off my new book on the dig for victory campaign of WW2. I hate this last part, but it’s so important – checking for errors and the image positions etc. Anyway, if people are going to pay good money for it, they should get the best I can possibly do.

Following the Dig for Victory guidance for June 1945, I’m taking stock of the plots. 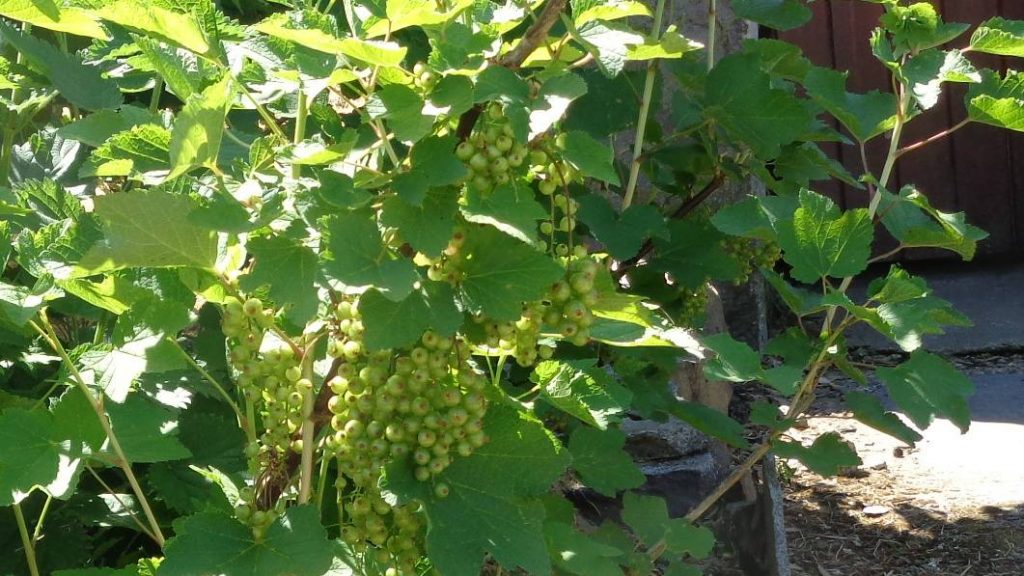 Walking up to the walled vegetable garden I pass the redcurrant bushes which are absolutely loaded this year. The blackcurrants aren’t so far behind them, either. In terms of work for result, currants have to be near the top. Half an hour’s pruning a year and mulches under to keep the weeds down is it. Plus harvesting time, of course. 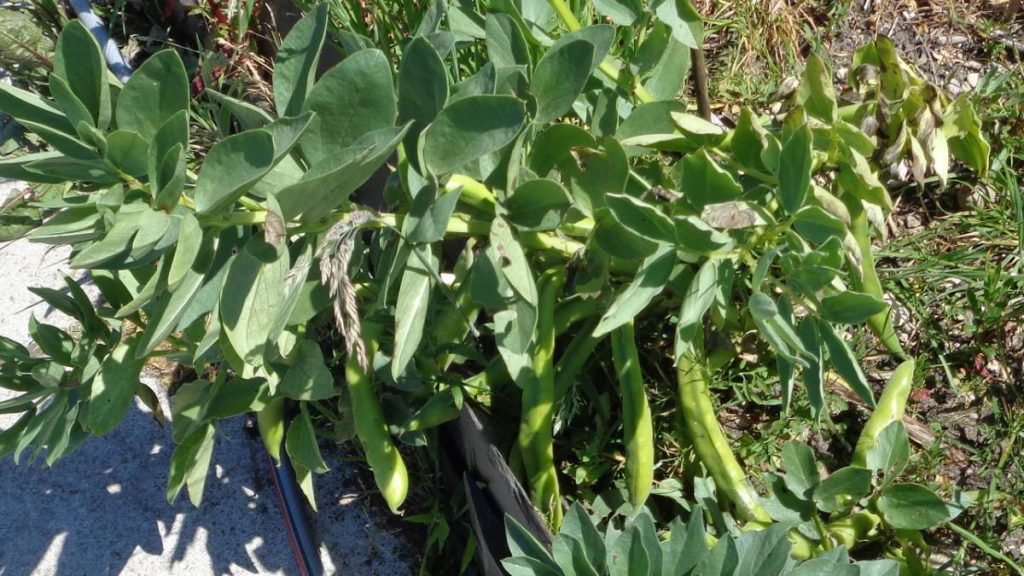 The Aquadulce has some pods ready to pick. I love broad beans although Val is not so keen on them. They’ve been blown around in the winter winds and would have done a bit better if I’d put string supports around them. Still another crop for very little effort, so no complaints there.

The Karmazyn broad beans in the field plot are coming along well although they’re a month or so behind the autumn planted Aquadulce.

Up in the field raised beds I’ve started harvesting peas, Douce Provence. They’re doing quite well as being a very fast-growing dwarf variety they cope with the open aspect winds in the field plots.

Having had a bit of a disaster when the strong sun cooked my brassica seedlings, I’m happy to say the second sowings are doing well. They’ll be planted out fairly soon in the brassica tunnels and should give me a decent winter crop.

After my panic to get seeds, I’m happy to say I’ll have enough leeks. They’re mainly in troughs and I expect to start planting them out in a few weeks time. 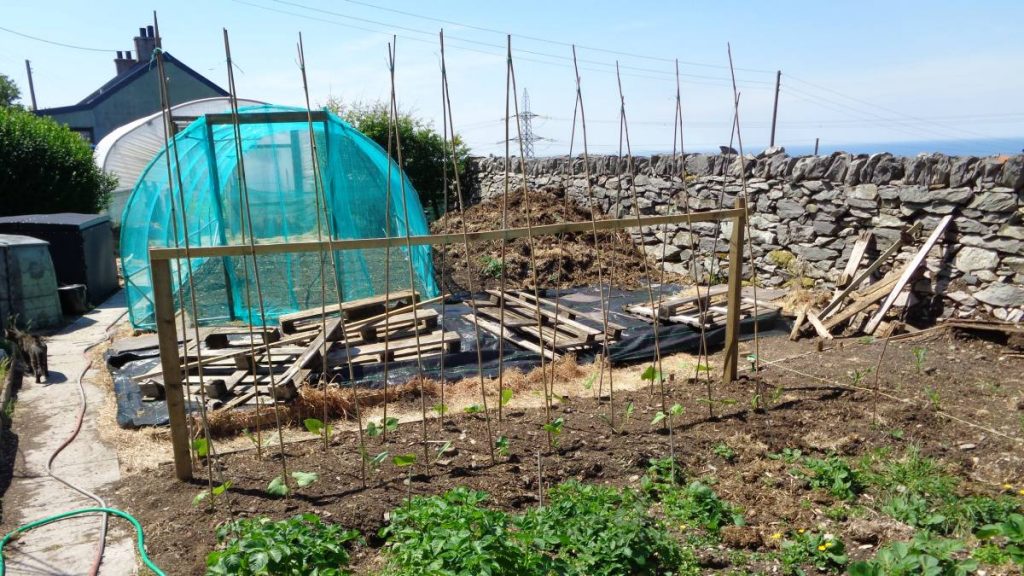 In addition to the French climbing beans in the polytunnel, I’ve now got four teepees outside, three of Blue Lake and one of Cobra. We should have enough French beans to feed the neighbourhood if all goes to plan. Good job they freeze well!

I’m also risking runners outside. I’ve got a bit of a Heath-Robinson frame system that should hold them OK, despite the winds. Fingers crossed for a good crop from those as well. Like French beans, the excess will freeze well.

I’ve got a second early, Estima and maincrops Sarpo Mira going in the walled veg plot and Charlotte in a raised bed in the field plot. We’re eating the Colleen first earlies from the polytunnel – good flavour but a poor yield. Quite scabby too, but that may be the compost.

I’ve got spinach, chard, lettuces growing in beds and a dozen small cabbages. A couple of the cabbages are a bit caterpillar damaged but that’s OK, the chickens can convert them to eggs for us. The biggest area is at the top of the plot, covered in landscape fabric over a layer cake of card, sheep muck and grass clippings. Through that I’ve squashes, pumpkins, courgettes and an outdoor cucumber. 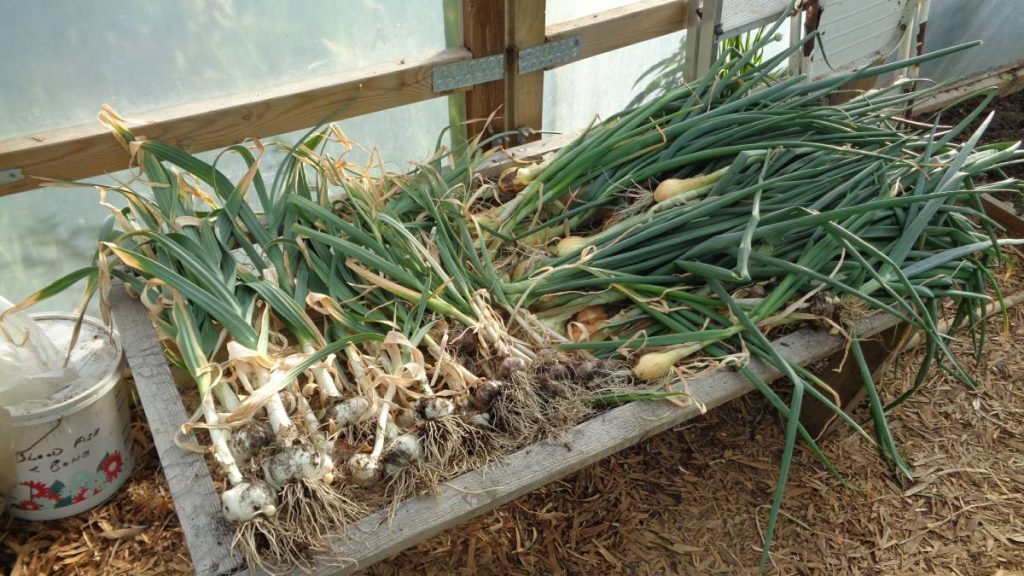 Onions, Garlic and Elephant Garlic on Drying Rack in Polytunnel

I’ve got onions, garlic and elephant garlic harvested from the polytunnel as well as growing in the field plots. The autumn onions from sets are reasonable although about 10% bolted. With luck they’ll keep us going until the outdoor crop arrives. The elephant garlic has done really well but the ordinary garlic, not so good. Can’t win them all. 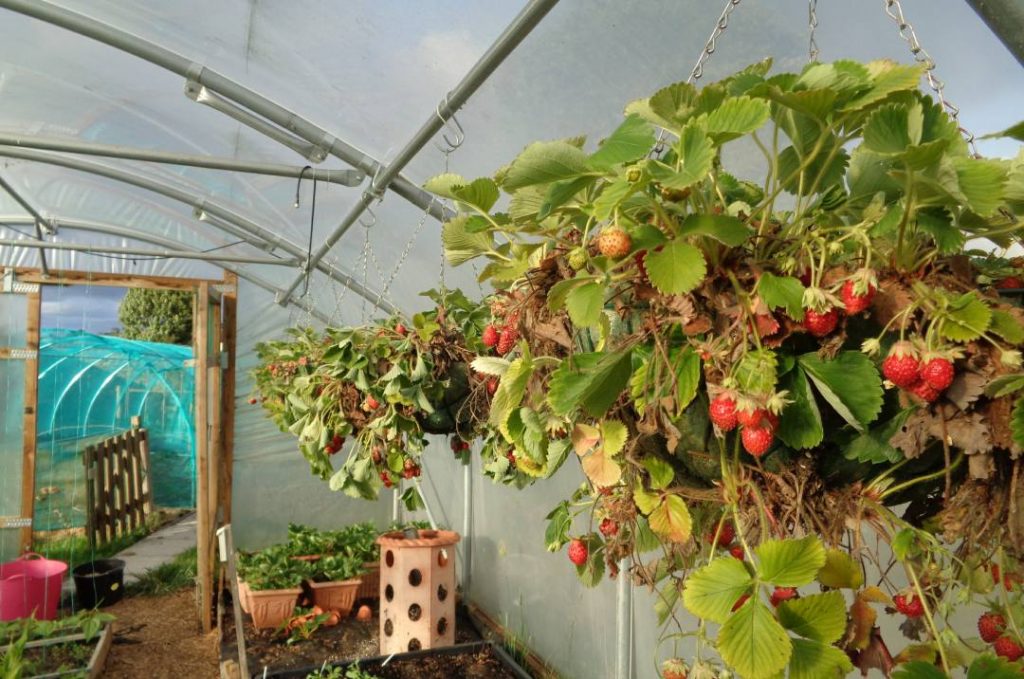 The most impressive thing in the garden is something I can’t share. The scent of strawberries is so strong when you step into the polytunnel. It’s like being in a flan!

3 comments on “Taking Stock of the Plots”