I’ve seen a few butterflies recently. Pretty as they are, wings a fluttering, I can’t say the cabbage white is a welcome visitor. They’re delivering their load of eggs which, hidden below a leaf, will hatch a plague of voracious caterpillars to destroy the cabbage crop.

Sure enough, there on the underside of a leaf was a clutch of little yellow eggs. A ticking time bomb easily disarmed, smeared away. I can’t help but worry there’s another one I’ve missed though. 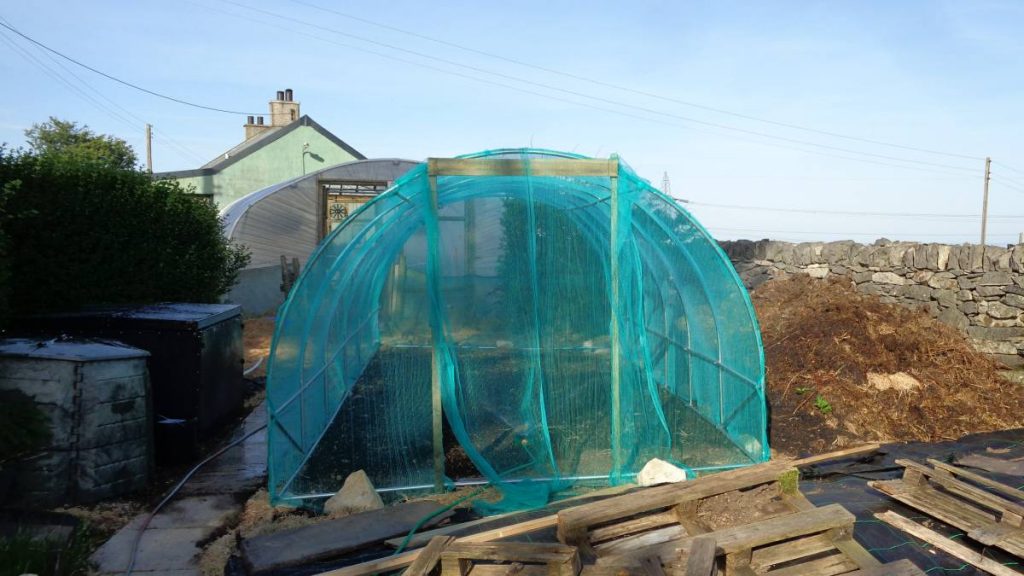 Over in the walled vegetable garden I’ve constructed a new brassica tunnel / cage. Ages ago I had a brassica tunnel made from plastic tubes which served well enough but just couldn’t handle the windy conditions here.

After the second time the wind demolished it I replaced it with one based on the frame of a polytunnel. I had a an old cheap tunnel that had moved here with us, but never got built as a polytunnel. I knew it would just be ripped to shreds by our weather, so not worth the effort. That worked well enough but the really cheap frame was on its last legs and rusted and fell apart after a year.

So before the plague hit I bought a 6 x 3 metre cheapo tunnel via Ebay. It was £136 but I should be able to sell the cover on Ebay and get £30 back. It’s made from galvanised tube (outside of the tube only) so it should last me 5 years at least. Fingers crossed!

I could have built something from wood for less money but it would take time, not be as robust and a lot heavier so moving it would be harder. I don’t want to grow brassicas in the same place, year after year. That way lies problems.

The frame quality isn’t superb but it was very cheap – you can’t expect to get something like a First Tunnels polytunnel frame for that low price. Adequate is the word. Incidentally, I noticed the same polytunnel on Ebay for about £1,000. Supply and demand as they say in China 🙂 Profiteering from the Pandemic Panic is what I call it.

The frame is covered with debris netting, aka scaffold netting or windbreak netting. I got a 50 metre roll of 2 metre netting for £28 on Ebay. This will also provide for an arrangement on the small frame that’s in the field plot. It’s tied to the frame using plastic coated garden wire.

Why a Brassica Cage

Or, what has a brassica cage ever done for us? Channelling the Life of Brian there.

Firstly they keep the butterflies out. No butterflies means no caterpillars munching away and reducing prize cauliflowers to a stalk overnight.

Secondly, a brassica cage moderates the wind. It doesn’t stop the wind but it slows it down and reduces the force on the plants. The main benefit of this that the plants don’t rock which causes the root hairs to break. Root hairs are how the plant feeds so a plant damaged by wind rock can starve in the midst of plenty.

Because wind speed is reduced, wind chill is reduced on wet plants after rain. Effectively the plants are kept warmer and that helps them grow more. On the other hand, the netting provides shade so the plants don’t scorch in strong sunshine after rain. Neither of those are big problems but every little helps.