Out came the sunshine and dried up the rain, so back to plots where I managed to get myself sunburn. Not badly, just enough to make my neck and arms glow and sting. Luckily I had a hat on for most of it, but still felt hot and bothered by the end of the day. 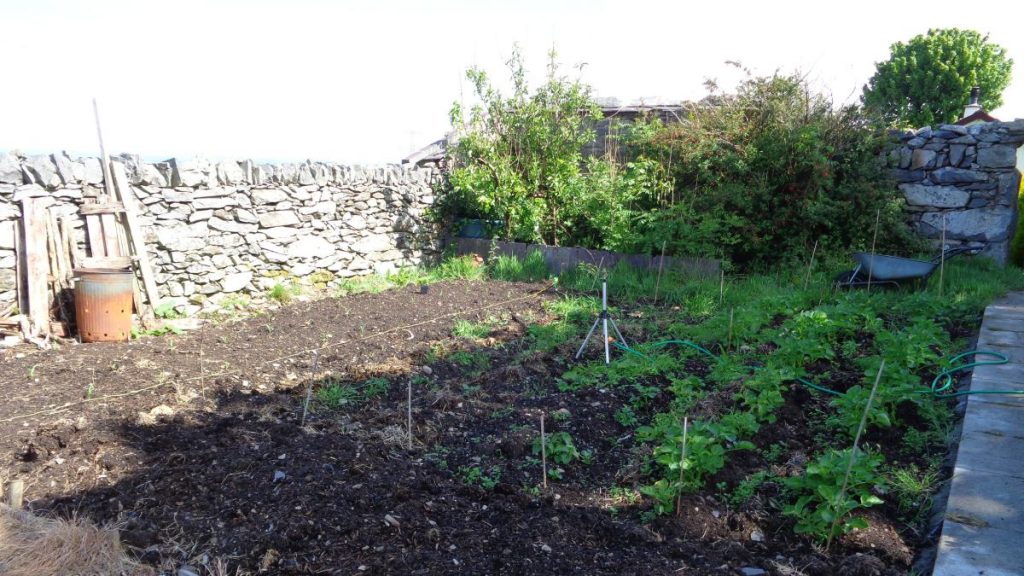 Sweetcorn planted between the wall and the potatoes where it catches the sun early.

In the Walled Vegetable Garden

I’ve got the sweetcorn planted out, a variety called Swift. It’s a very fast tendersweet which I’ve grown before and should perform well outdoors here. We’re so fortunate nowadays to have so many varieties of sweetcorn that will produce in cooler, northern areas.

When I first started growing my own, back when Noah was a lad, sweetcorn was very hit and miss in the north. Now, with the right varieties it’s just so much easier. I love sweetcorn straight from the plot but I hope we’ll have far more than we can possibly eat fresh. Happily sweetcorn is easy to to freeze.

The sweetcorn patch has had a lot of sheep manure added in a late double dig. All being well they’ll enjoy the nutrients and benefit from the improved water retention that organic matter in soil creates. It’s a very nutritionally demanding plant, which isn’t surprising when you look at how much it grows and how quickly. 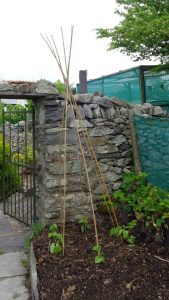 I’ve started building teepees for the climbing French beans. In the past I’ve used a plastic gizmo that you put on the top of the canes to hold them together but the gizmos are not as good as they once were – nothing lasts, although they’re only about 15 years old. Anyway, I’m just using a bit of string to tie them together which works well enough.

Climbing beans, both French and Runner, are really productive for the amount of space they take. Both freeze well to store but the traditional way to keep runner beans was to salt them. They take a fair bit of soaking and rinsing to get the salt out though.

I was going to build a dogleg frame for the runner beans this year but I’m going with a simple frame consisting of two uprights and a crosspiece with strings to the ground for the beans to climb. It will take less time and give me more plants in the space available plus I’m short of materials to make a dogleg. Not so easy to just get a few lengths of 2 x 1 at the moment!