A snapshot of my greenhouses

Sometimes there’s that much going on the easiest thing to do is grab what’s happening on a particular day. 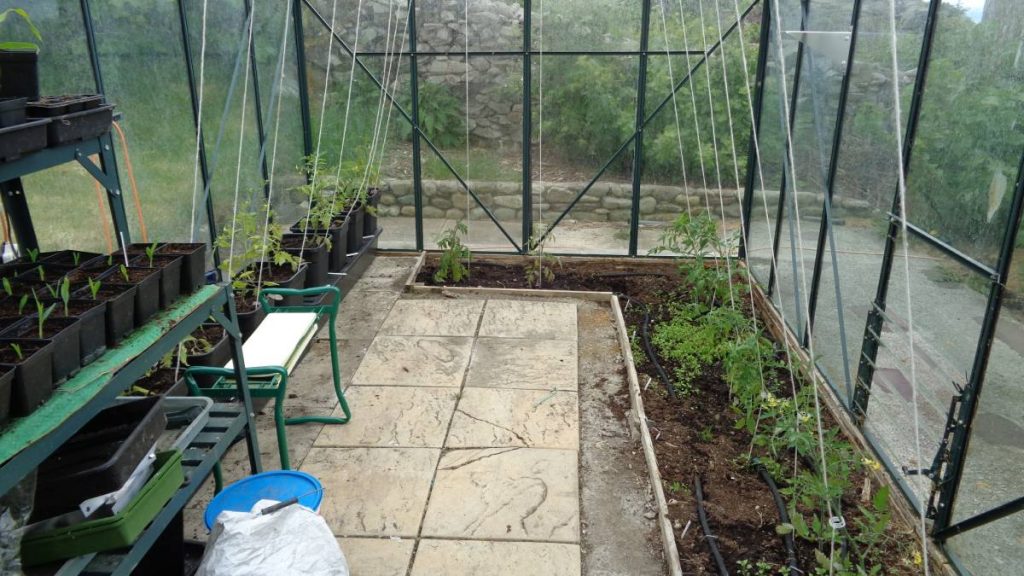 In the Vitavia greenhouse

In the Vitavia greenhouse the tomatoes are all planted out now. They look a bit sick when they come out of their 10 cm pots having exhausted the compost, but a week in the border and they start leaping ahead and looking much better. I’ve eight tomatoes in the two quadgrows in the Vitavia as well.

Last year I overcrowded a bit and don’t want to do that this year but I must have miscalculated as I’ve room for one more tomato in the border. I’ll do a plant from a sideshoot as it’s too late to sow now. Still got a Marketmore cucumber to go into the border as well. If it’s as productive as last year, we’ll be giving cucumbers away! 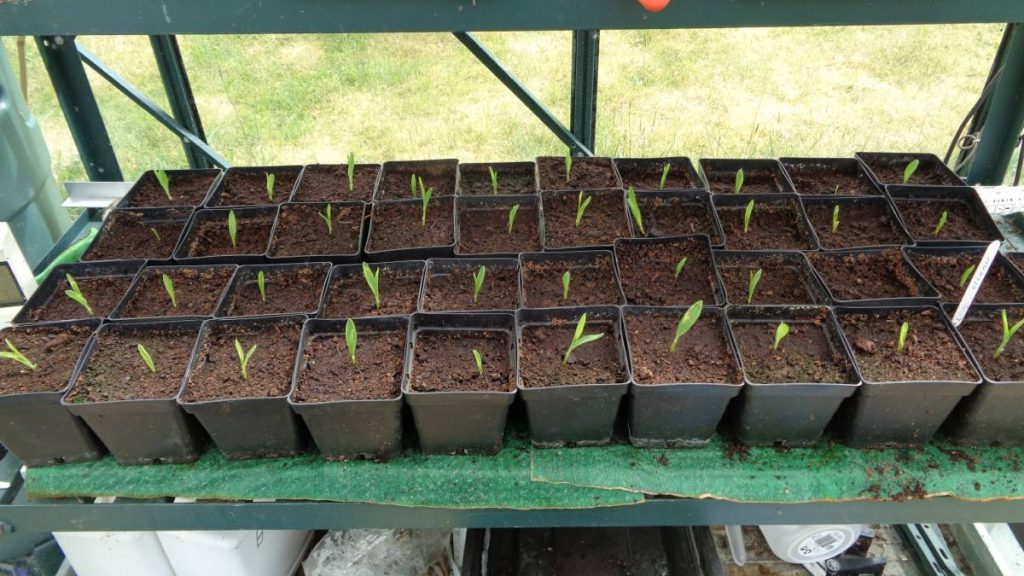 Swwetcorn Swift for planting out shortly when the weather is right

On the staging I’ve sweetcorn Swift in pots waiting to go out in the walled veg garden, probably over the weekend or early next week. The first year here I tried sweetcorn in a raised bed in the field garden. They did well at first and then blew out of the ground in a storm. Fingers crossed they’ll be OK in the sheltered garden.

In the Eden greenhouse 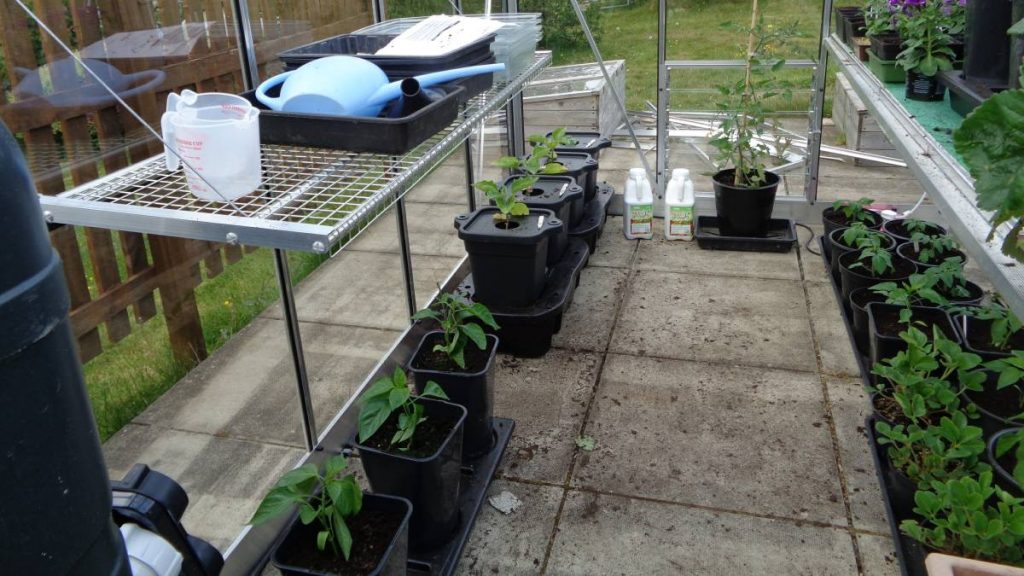 The new quadgrow was set up for aubergines and a gherkin cucumber. I’m afraid I actually prefer the old style which was easier to set up and to fill the reservoir. I really don’t know why they changed it. It’s still a good product that I’d recommend though.

With tomatoes I grow up strings but I’ll use canes for the cuke in the Eden. I might need to set up canes for the aubergines if they grow really well. Next to them under the folding staging I’ve two sweet peppers and a chilli in a chilligrow. 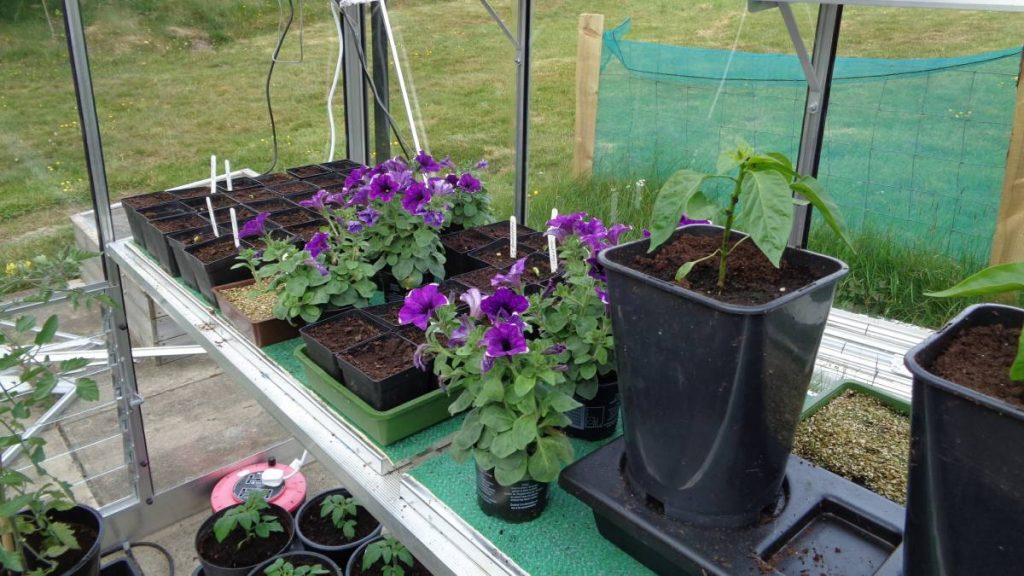 The other chilligrow is on the staging along with the strawberries in the growbag and trough, climbing French beans Blue Lake starting in pots along with squashes, pumpkins and courgettes. I’ve also some Hispi cabbage and calabrese Autumn Spear in seed trays germinating and some chard in Bustaseed modules.

There are also some Surfinia waiting for the weather to be right when Val will plant them out. I keep offering to compost them but she is not keen… 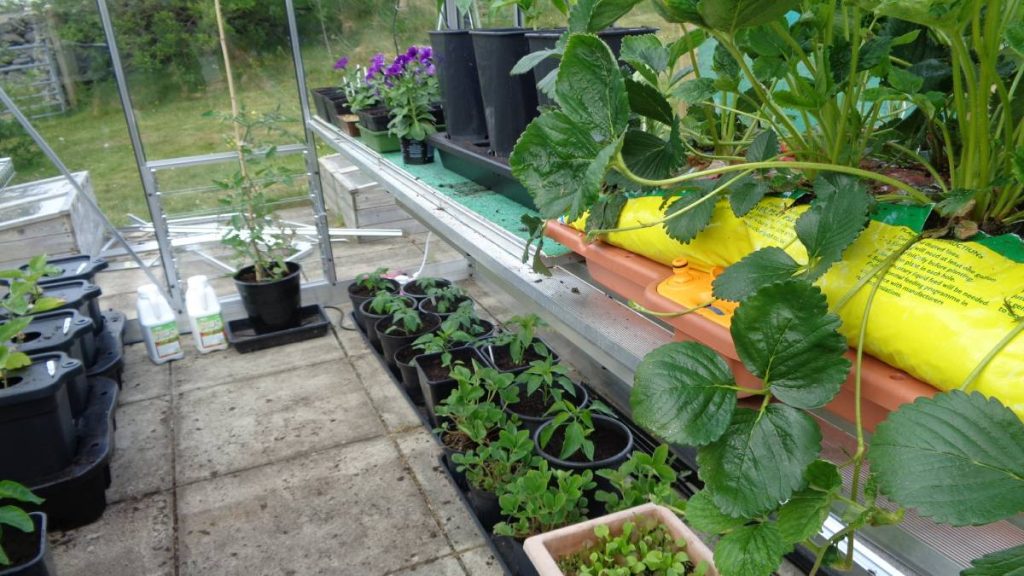 Eden Greenhouse – Under the Staging

Under the staging I’ve 8 Heartbreaker pot bush tomatoes. Yes, 8 is a bit of overkill but it started as 14 and I’ll be giving a few more away yet. I’ve also got 4 sweet peppers and 4 strawberries in pots. Finally, under the staging, I’ve a trough with fast growing mixed salad leaves to cut and come again.

I nearly forgot, the integral shelf! I’ve yet more strawberries in pots, about a dozen plants. And a Sungold tomato in a pot by the opening vents. It’s amazing what you can get in to a greenhouse if you try.