The last 10 days have been really busy for me so I’ve not had much time on the plot and even less time to keep the diary up to date. One reason has been that I agreed to undertake an upgrade on the National Vegetable Society’s web site. 400 odd pages at just 10 minutes a page. Well if you do the math you’ll see it’s a lot of work. 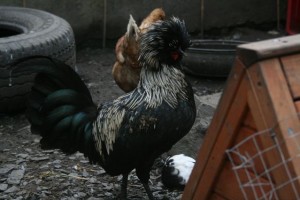 Another day was taken out with a trip up to Yorkshire where we did some filming at my daughter’s place. Her ducks have grown huge! I think she’s over-feeding them and this rate they’ll be bigger than swans soon

Her Polish cockerel is so cute. Apart from cock a doodle do every two minutes he squared up to the cameraman to discuss who was the man of the garden. The cock a doodle do is the reason why he’s off to a better life on a farm in Darlington soon. The neighbours are understanding but suffering sleep deprivation which is banned under the Geneva Convention.

Back home though we’ve managed a bit on the plot. The last row of potatoes came up. They were the blight resistant Sarpo but they didn’t do so well this year. I think there must be different strains of blight and we had a bad one. Still, a sack full of spuds is a sack of spuds. 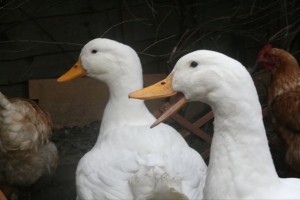 Bumble and Bee The Ducks

Next year we’re hoping to move so I’ll be sticking with earlies that miss the blight anyway. We found that swift were a good all rounder if left to grow on and they stored really well so that’s going to be the mainstay next year.

The beans are nearly finished, so the tepees will be coming down soon. Then the autumn dig over begins. There’s a real flush of weeds on plot 5 but they’re annuals so I’ll just dig them in. An impromptu green manure.

The cucumbers are completely finished now as well but the tomatoes still keep ripening in the greenhouse and I’ve peppers ripening in there as well. I’ve also got late sown lettuce which are doing really well.

Back at home I’ve four tomato plants that were from sideshoots and these are in excellent condition for the time of year. The Sungold have finished at the plot but the home plants are really laden.

4 comments on “Catching Up!”

Leave a Comment Here on Catching Up! Cancel reply