Since we had yet another reasonable day and the great allotment web site upgrade is ticking along nicely with all the glitches fixed, it was off to do battle with the weeds. I can’t quite believe how quickly they’ve grown.

The rubbish trailer was on the site so I dumped my blighted potatoes and some other bits of junk into it. I was quite surprised by the amount of green waste people had put in to the trailer. There were masses of sweetcorn stalks for starters.

It strikes me that a few big compost bins for stuff like that are a better idea than using the trailer. After all, it’s very mixed waste so I suppose it ends up in landfill whereas compost is valuable.

When I got home I told Val the cucumbers were finished. I thought she’d cry but no, she seemed quite grateful. There’s only a dozen in the fridge.

The tomatoes are far from finished, a good carrier bag of rather nice Alicante came home with me. I’m afraid the Sungold didn’t make it into the bag though, I ate them as I picked them.

I’ve got some lettuce going well in both houses, so we’ve still got salad. Bit of watering and then it was time to attack the weeds. As I collected my hoe from the shed on plot 5 I noticed a new couple working on Tony’s plot 4. They told me they were just helping him but they didn’t seem keen on tackling plot 5 as well.

I didn’t get their names, they’re Polish and to be honest after their third attempt to tell me I pretended I’d got it. When I heard the accent I was rather hopeful they were Croatian – bet I’m the only person in Crewe (if not England) with 3 copies of Vegetable Growing Month by Month in Croatian! Yep, first prize one copy and second prize was three,

After that it was just hoeing until I realised that there were an awful lot of wasps around. Now experience has taught me that wasps can nest in the ground and the only visible sign is a little hole with a number of the yellow and black devils buzzing about. That’s until you really disturb them, when about 20 million appear and it’s time to run away as fast as you can.

So, discretion being the better part of valour, I decided that patch of weeds could stay where they were. I may be wrong about a nest, but not worth finding out the hard way. One thing that was a bit weird was there seemed to be two groups of wasps and they were fighting each other. I don’t think they were playing anyway. 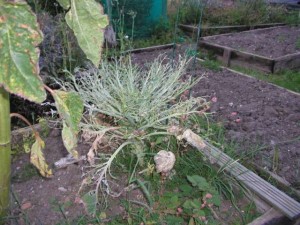 I did wonder if the plague of caterpillars had attracted them. Having munched my Brussels away they’re crawling around on the ground now. It’s like one of those films about army ants or locusts only with caterpillars.

I snapped a few photos, including a sprout plant on another plot after the baby butterflies had been at it. Mine are now on the compost heap. Curses!