In the Greenhouse – New Equipment on Test

Setting up the greenhouse for growing rather than propagating. Testing out a Chilligrow and Self Watering Tower Pots.

The greenhouse is moving from its propagation set-up to the growing set up. Two of the three benches will move outside for the season which will give me the room to set up two Quadgrows growing 8 tomato plants. I’ve been singing the praises of the Quadgrow for years now. The consistent watering is perfect for tomatoes and the large reservoir saves a lot of time watering. They’re far better than growing in grow-bags or pots.

Chilligrow in the greenhouse – using the heated pad to germinate some squash and courgettes in pots.

Last year the third bench was used mainly as a place to put those things that should have been put away somewhere. This year I’ll make better use of that space. I’m leaving the heated base pad in place and putting a Chilligrow on it. In the potting shed I’m putting the second Chilligrow but that one is sitting on a Vitopod base. 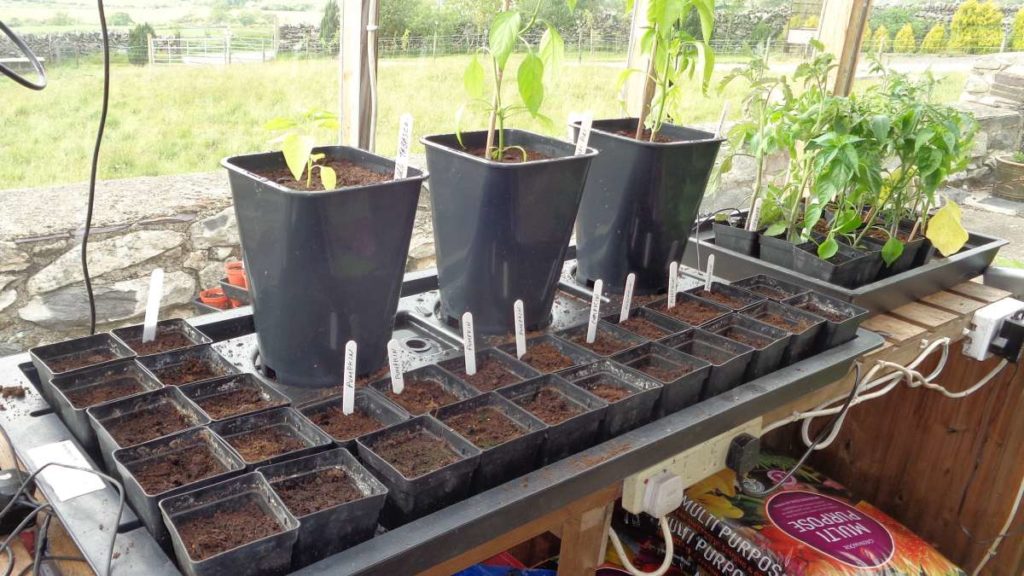 Chilligrow on Vitopod base with various pots in the Potting Shed

The Chilligrow is basically a smaller version of the Quadgrow from the same manufacturer (Greenhouse Sensations) designed for 3 instead of 4 plants and with a smaller reservoir. Because the size is smaller than the Quadgrow, it should be possible to grow compact plants on the bench.

I’m hoping that keeping the temperature of the chilli peppers that little bit higher will improve growth without going to the expense of heating the greenhouse. The heat is directly under the plants so their water and soil is kept at the desired temperature. Hot air, of course, rises so when the heat pad is on the warm air is rising over the plants.

The pad uses 100 watts when on and the thermostatic control ensures it’s only on when needed. This means that the energy used isn’t so high. I’ve not accurately measured it but estimating at 6 hours on-time a day over six weeks at the beginning of the season – before the temperatures really warm up – gives me a total usage of 25 Kwh. That costs roughly £3.50 for 3 plants.

For a high value crop, especially one that is normally imported with the CO2 burden that creates, it can make sense. See my piece on the pros and cons of importing as against growing crops at home under cover and the ecological costs here: Hierarchy of Ecological Badness Incidentally, we have a grid-tied solar panel set-up that generates around 3,500 Kwh per annum. When you factor in that we work from home, it makes a significant difference to our individual carbon footprints. 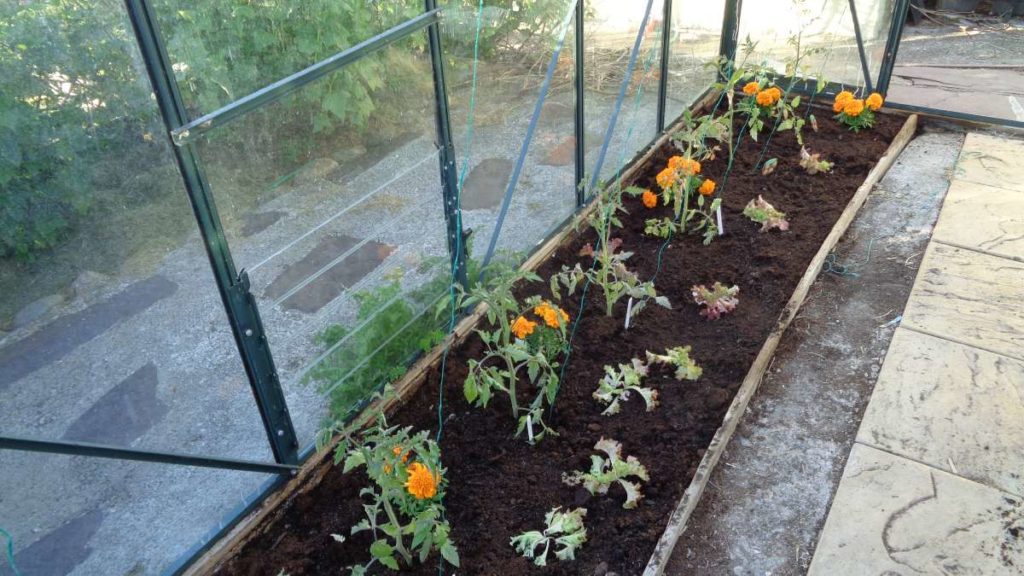 I’ve planted out the tomatoes in the border. As I mentioned here, I’d seen a video about a market gardener who plants his tomatoes very deeply. My greenhouse border soil isn’t deep enough to do that, below a foot it gets very stony. So I’ve sunk the plants about 8” which is still deeper than I would normally go. We’ll see how they do.

Along with the tomatoes I’ve planted marigolds. They’re supposed to repel whitefly although quite how effective they are is debatable. They’re pretty anyway. Up at the far end there’s a cucumber and a gherkin. I’m growing gherkins as my daughter wants to pickle them. I’ve also planted some lettuce in the border, Salanova and Lollo Rosso. 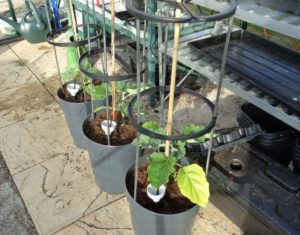 Harrod Horticultural kindly sent me a set of three of these Self Watering Grow Pot Towers to trial.

The concept is simple enough, a large pot of compost (11 litre capacity) sits above a 4 litre water reservoir. The water is drawn up into the compost by capillary action. Water is filled via a tube which has an indicator in it so you know when it is full and when it requires re-filling.

They come with a framework made up of metal tubes and recycled plastic rings to support the plant and firmly hold a centre support cane. They’re shown with tomatoes but I’ve already got these covered and, anyway, I think the support frame will make pruning the tomato plants properly more difficult. So I’ve put aubergines in two pots and a gherkin into the third. It’s early days to say how beneficial they will be – I’ve got two aubergines in normal pots to give me a comparison.

I have to say I’m not keen on the support frame. Assembly is a bit fiddly and it has a tendency to come apart if knocked. The plastic support rings are a bit fragile too – one broke during the assembly process. I’ve a feeling that the sets of metal rods and plastic rings will be easily lost and broken over the years. Still, as I said, it’s early days to say if I think they’re good value.