This weather is not making it easy. We’ve had some lovely days but cold nights and now the nights are warming up but the days are cooling. I’ve been reducing the temperature in the heated propagators prior to planting out so the plants don’t get too shocked. Temperatures can get quite low at night even in the greenhouse and polytunnel. 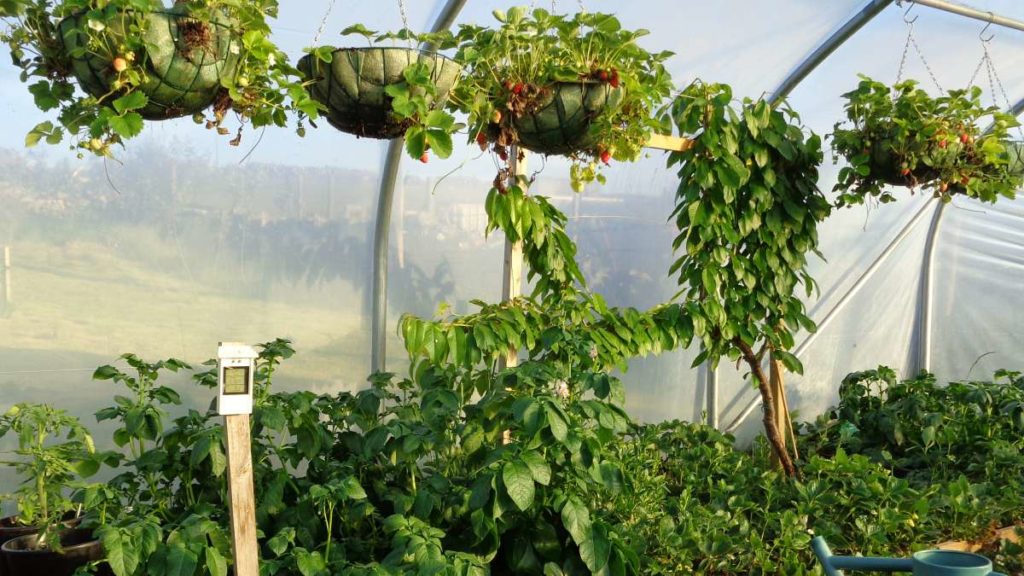 After last year’s success with growing strawberries in hanging baskets, I’ve expanded production from 4 to 10 baskets. They’re doing well up there, I think the extra heat benefits them but the big plus is no slug damage. No nibbled berries at all.

Watering is easy enough with a spray lance and hose but feeding is tricky as the baskets are quite high. Lifting the watering can and judging how much feed has gone onto the basket isn’t as easy as I’d like. I might just try a 1 litre jug and pour it on the basket.

The only other problem with hanging baskets is when you’re working below them, forget and stand up. BUMP!

I’ve also got a patch of strawberries planted into the border under the trained cherry tree. If that doesn’t give me some fruit this year, I’ll consider it a failed experiment and take the tree out. It has flowered so I’m hopeful this will be the year.

The side bed is about four feet wide which is OK for most things but isn’t working too well with the strawberries. The reason is that they fill the bed which makes harvesting at the back difficult. Despite being planted through 100 gsm weed matting I’ve problems with willowherb, grass and nettles popping up amidst the strawberry plants.

The grass seems to root into the matting which means pulling it out without damaging the mat is well nigh impossible. The nettles have sent roots under the side of the tunnel and then the matting. Then shoots have forced their way through where the mat is cut for the strawberry plants.

I have a plan though! I’ve had a strawberry barrel for about 10 years now. It’s not done well on the patio here but I think it will do much better in the polytunnel. Potentially 24 plants in less than 1 ½ square feet.

There will still be some plants in the border but I’ll put the plants at the front in large troughs. These can be lifted out of the way to give easier access to the plants behind for harvest and weeding.

On the other side of the tunnel (right) I’ve planted out my sweet peppers and a couple of chilli peppers into the border. Last year they didn’t do very well which I think was down to them being really pot-bound when they got planted. So this year I’m risking the low temperatures to avoid that. 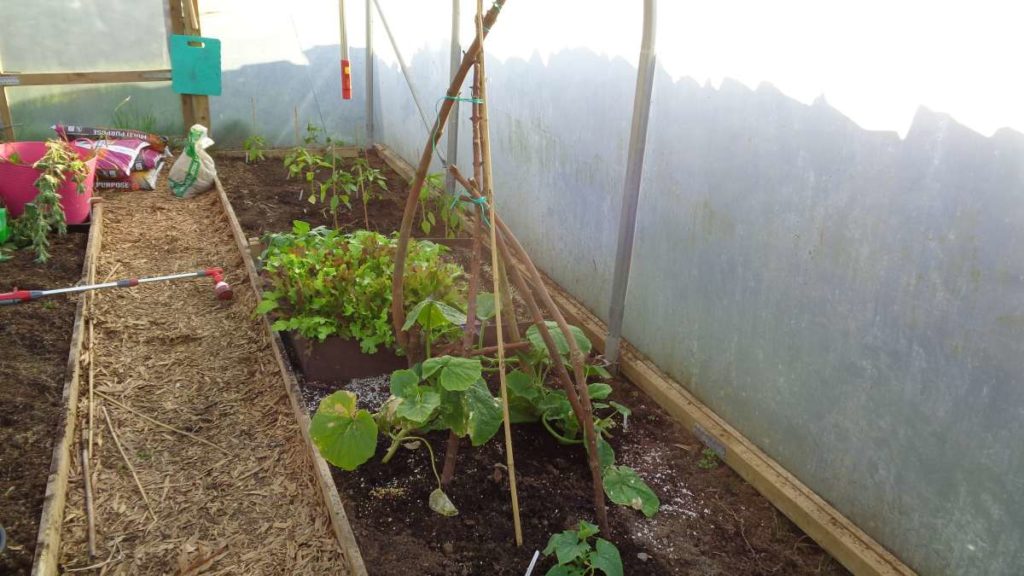 Polytunnel Right Border – Squash & Gherkin at front then the square metre bed and finally the peppers and a cucumber.

I’ve got a cucumber, Marketmore, which will be trained up a string. I’ve also built a tripod type support with some sticks and planted a couple of squash – Uchiki Kuri – to grow up it along with a gherkin.

I’ve a small bed of carrots coming along and a 1 metre square raised bed which has half given over to carrots, a quarter to cut and come again mixed lettuce and the rest to radish and spring onions. 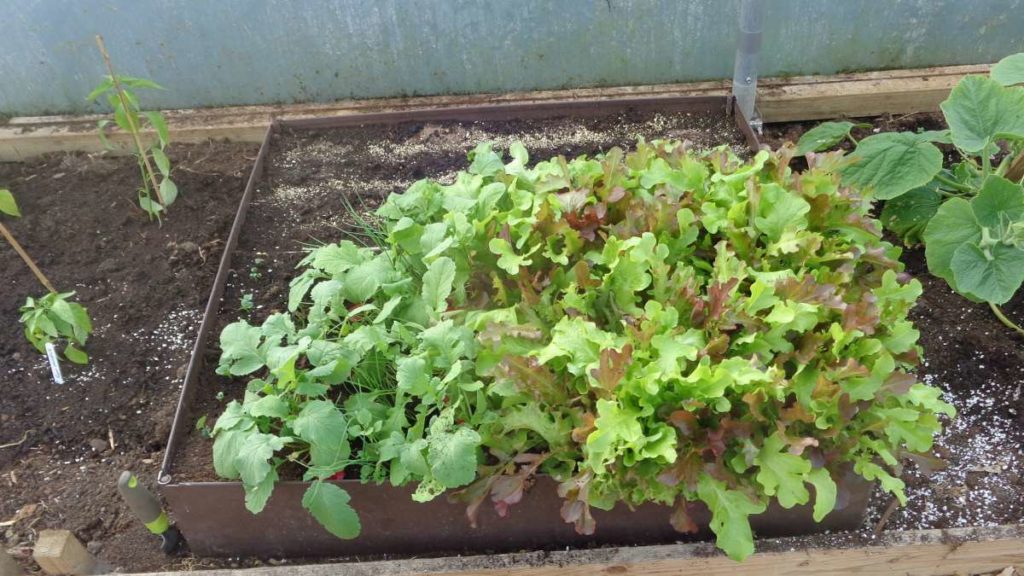 Back on the left border, the first early potatoes are in flower so nearly time to start harvesting. I’m growing my favourite Arran Pilot along with BF15 and Samba which are French varieties a reader kindly sent me. I’ve also got some Charlotte second earlies at the top end. 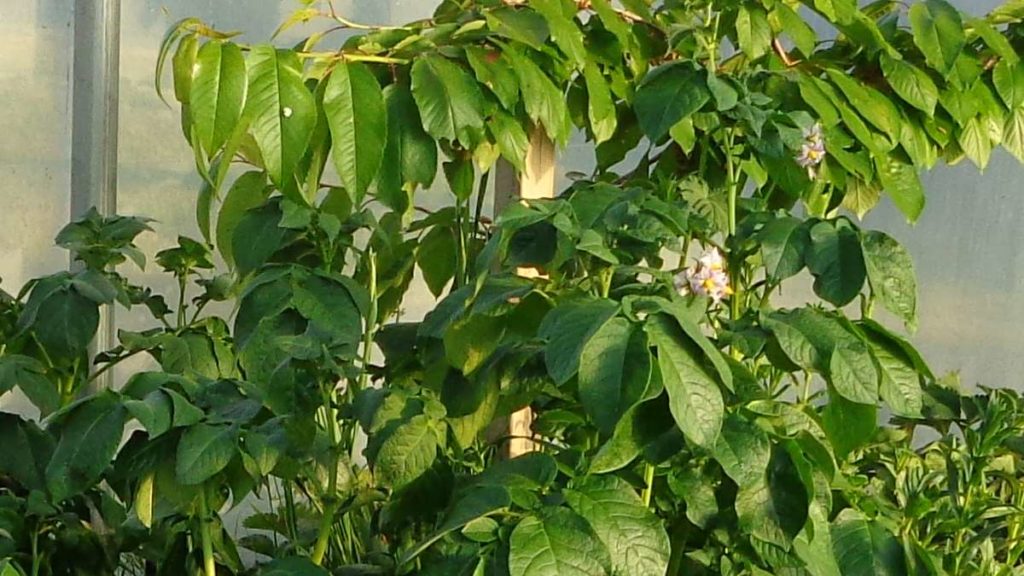 Still to plant out is the centre bed which will have sweetcorn and climbing beans. Cobra at one end and runner bean Firestorm at the other. The sweetcorn was pre-chitted and the sprouted seeds put in 3 ½ in pots which are keeping warm in the Vitopod. Most runner beans won’t do well undercover but Firestorm are self-fertile so they’ll perform in a polytunnel.