The guys from Swallow Greenhouses came over on Monday and fixed the leak from the opening windows on the Potting Shed. 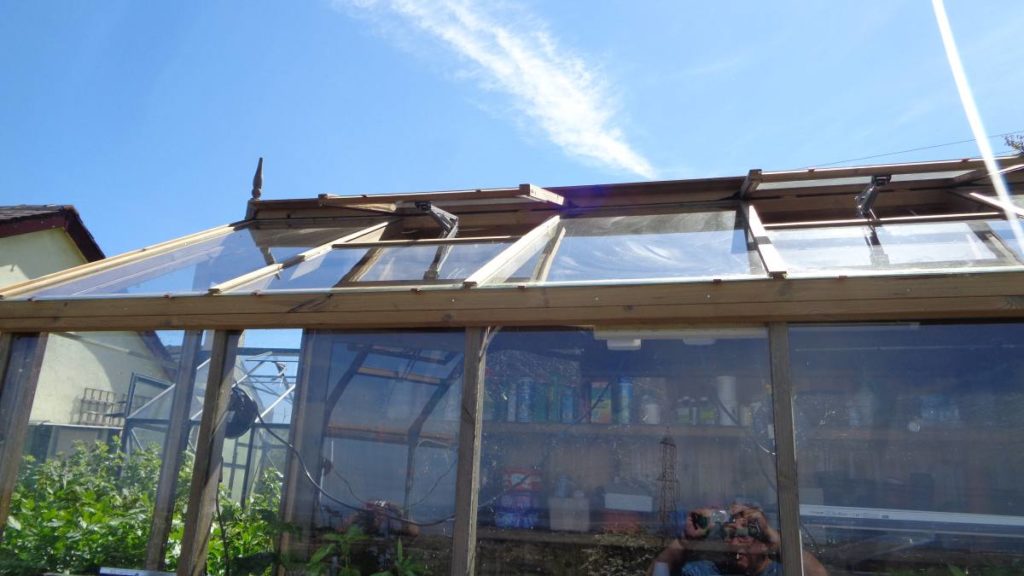 I had my Swallow potting shed just over 4 years ago in February 2015. Generally I’ve been really happy with it but I have had a few problems with leaks.

We get a fair bit of rain here so it gets tested pretty often. Initially it developed a leak from where the glass roof joins the solid roof. Nothing too bad, but an annoying drip, drip drip.

I contacted them and next time they were in the area they replaced the ridge beam. They’d tweaked the original design so fingers crossed this cured the problem. After a while it was pouring down and the drip came back. So they went back to the drawing board and came back to fit the Mk 3 ridge bar which did the trick.

But now the potting shed had found a new place to leak, around the opening lights in the glazed roof. Not massively but enough to make me wary about using grow-lights under the drip. I may appear casual about electrics but even I don’t try running things under water!

So on Monday they came back to sort it out. I thought they might just replace the opening windows or fit some sort of shield to stop the water getting onto the top of the window. Nope! They’ve redesigned the opening windows, adding a flexible gasket.

But more than this, they brought a whole new glazed roof. Taking no chances! I was amazed how efficient their fitters are. They arrived at 10 am and were taking their tools and the old roof down to the van at 11 am. It’s a joy to watch them work. The job isn’t rushed at all, they just don’t waste any time. No false starts or head scratching and puzzling. True craftsmen. Friendly cheerful guys too – which is always good when you’ve people working at your place.

I’ve described Swallow as being the Rolls Royce of greenhouses in the past but perhaps Tesla would be a better description. Tesla are noted for always improving their cars. Whenever they get a problem they look at the cause and tweak the design so it doesn’t happen again.

They’re not cheap – around £2,500 – but it’s worth it to me. It’s actually more than just a greenhouse come shed, it’s an extra room. I’ve often just sat and watched the sunset in there. My neighbour reckons all I need is a hammock and a kettle and I’ll be set to move in. It will last me out anyway.

You can see the full range of Swallow wooden greenhouses here.