This year has not been the usual cool, wet summer we’ve become used to in Wales. The plants have, mostly, loved the heatwave and we’ve managed to keep them watered so it’s getting set to be bumper crops.

This year I started with a cucumber plant bought from the nursery and accidentally damaged the stem so it promptly died but I grew 3 replacements from seed and planted them out. One in the greenhouse and the other two in the polytunnel.

The greenhouse plant has grown exceptionally well, reaching the roof and now being trained on a line down the greenhouse like a grape vine. It’s producing more fruits than we can use ourselves.

The two plants in the polytunnel were growing alright but nothing special. They were producing fruits as well, including the 18 inch beast in the photograph. I think the reason the plants in the polytunnel were not performing as well as the greenhouse cucumber is that the soil they are in is tired. The greenhouse border soil was refreshed by being partly replaced with fresh compost and added base fertiliser prior to the start of the season.

Since we’re over-supplied with cucumbers anyway, I’ve scrapped those plants and taken the opportunity to refresh that section of the border. I stripped the top 10 cm (4 ins) off and then forked it over, chopping up any remaining pieces of turf that were left from the original preparation.

Since the soil was pretty dry, gave it a heavy soaking to build the reserves back up. The polytunnel normally gets some water from below, seeping in from the sides, but the last months without rain and the heatwave has sucked the ground dry.

Because the soil has been opened up and expanded, I ended up with a wheelbarrow full of the top soil / compost mix which will go to improve the outside vegetable plot. After a couple of days and the watering, it had settled a little but not by much. Started planting it up with some dwarf French beans.

The aubergines just love heat and sunlight so they’ve been over-supplying as well. I had tried moving two of the five potted plants into the potting shed but they weren’t happy in there. A lower light level and west facing windows did not suit them.

I’d moved them back into the greenhouse but they weren’t doing as well as the others and it was overcrowded in there. So they’ve gone to the compost bin leaving us with three productive plants.

Well last year we went down to one plant which is about right for us. Courgettes are not my favourite vegetable but they’re easy to grow.. usually. Then it died under an attack of the slug army. Or maybe it died of despair at the weather as the rain didn’t seem to stop last year.

This year we’ve three plants and masses. Delivery men creep to the door, drop the parcel and run as we cry ‘have some courgettes, no please take more‘. 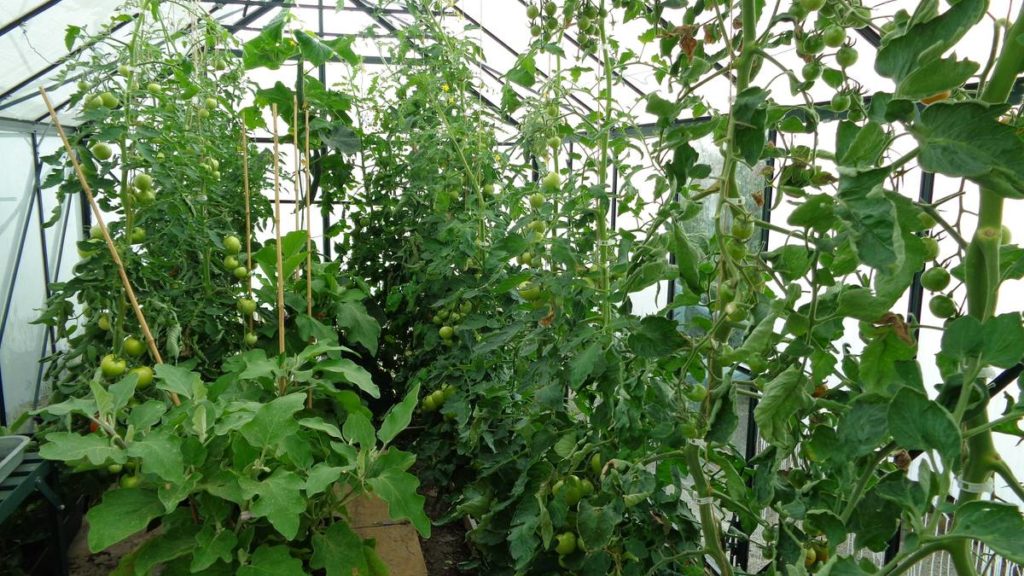 Greenhouse Interior Cucumber to rear, aubergines in foreground and lots of tomatoes – wall to wall and floor to roof.

The plants are heaving, absolutely loaded. They’re running up strings and for the first time ever a string broke under the strain! I’ve accidentally cut strings in the past but never had one just snap. Managed to join it onto a new piece and the plant falling had knocked some fruits off reducing its weight, so it should be OK.

In the polytunnel I’ve three ‘Red Alert’ tomato plants in hanging baskets which are fruiting well. One problem, they’re suffering badly with greenback. They’re normally outdoor tomatoes and I think it’s too hot and bright for them where they are. Feeding heavily in the hope the extra potash will help but it doesn’t seem to be working. Using them up in sauces so at least the fruits aren’t being wasted. 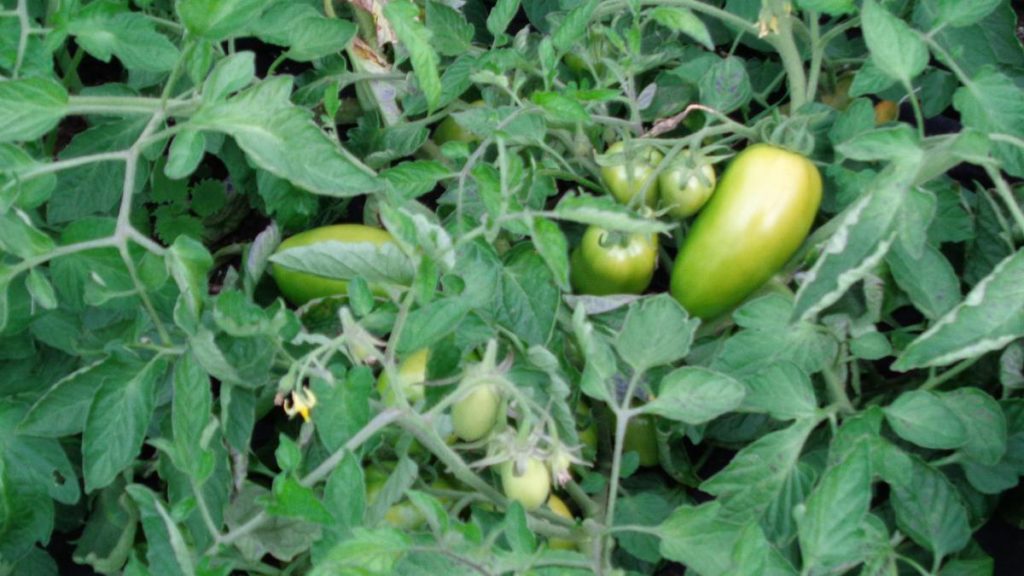 The outdoor bush tomatoes are forming lots of fruits and some of those are ripening. As long as blight doesn’t hit, they should give a great crop too. I never thought we’d have success with outdoor tomatoes here but this year we just might.