I’ve been looking at how the current generation of small farmers and market gardeners are doing things. Many of the methods have been developed in North America where there are more small-scale growers supplying local markets than we have in Britain.

Conventional farming has been a helpful influence on home and allotment growers. For example, optimum vegetable planting spacings were researched to help farmers maximise yields. Fertiliser requirements and application timings – such as what point to apply them – were developed to balance costs with benefits.

Things have moved on and large scale conventional agriculture has further diverged from small scale growing. Spacings are now are geared towards the huge machines that seed, weed and harvest the fields. Specialist advisors analyse and create fertilising and pest control programs – way beyond anything possible on a small scale. 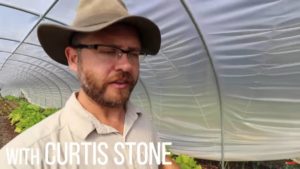 Curtis Stone – AKA The Urban Farmer

The small-scale commercial growers have a very different approach. They’re generally organic in attitude and selling locally direct to the consumer, working on far smaller areas, hundreds of square metres rather than hectares.

One Canadian small scale market gardener, Curtis Stone, uses his own garden and rents gardens to provide growing space. He employs staff and makes a good living from a quarter acre of land – that’s about 1,000 M2 or a tenth of a hectare, or four full-size allotment plots. For comparison, the average size of a farm in England is 85 hectares. 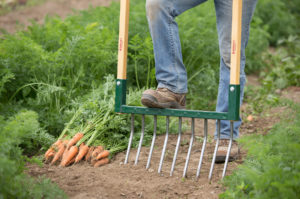 Broadfork from Johnny’s Seeds in the USA

This 30 in. bed width has become the standard for these market gardeners and a range of tools are available designed for them like broadforks for opening up the sub-surface soil, tilthing tools and harvesting cutters for salad greens. They’re managed on a no-dig or low-tillage system with additional compost being added annually.

I must admit that I think that raised beds are often overdone. If you’ve got a good, deep soil then why go to cost and effort of building raised beds? 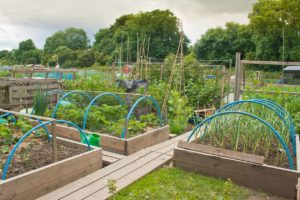 Allotment Raised Beds – But are they necessary?

I’ve built them on two plots where I had occasional flooding problems and it was easier to raise the growing height rather than put in drains.

Here I’ve put in some raised beds to quickly create quality growing space with a deep soil above the stones. I’ve never been unlucky enough to have such a stony soil as we have here. My first thought was to double dig but often it takes three goes just to get a fork into the ground. It hits a stone and stops with a shock. A spade is almost impossible at times.

The generally accepted size for raised beds is that they should be 4 feet wide by 10 feet long (1.2 x 3 metres). This makes a lot of sense as it enables access to the centre of the bed from either side and isn’t so long that you are tempted to walk over the bed to get to the other side. The main paths are set with a width of around 2 feet (60 cm) to work from and the side paths at 18 ins. (45 cm) wide enough to nip through to the other side.

Is the 30 inch bed for home growers? 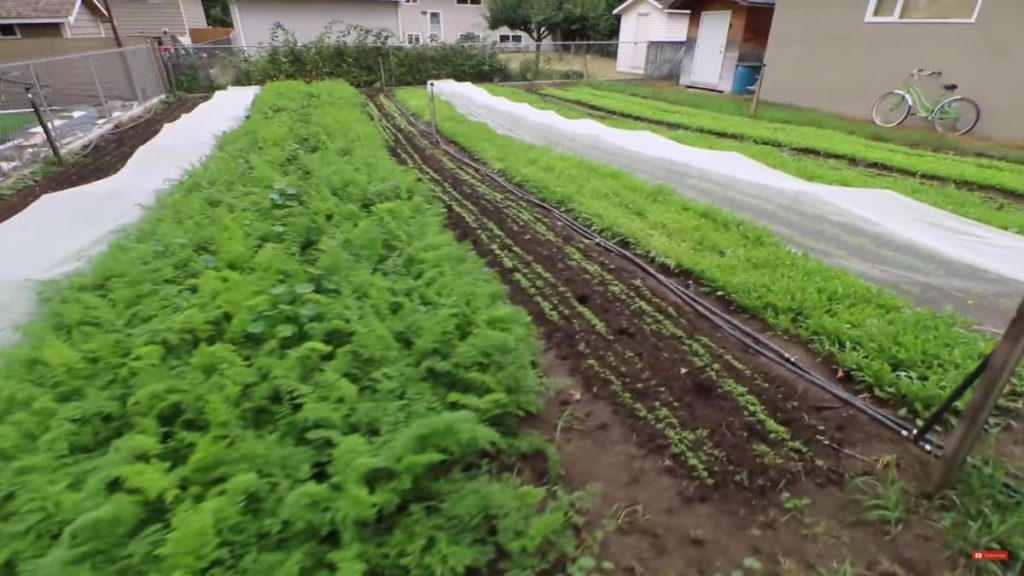 30 inch beds as used by Curtis Stone – The Urban Farmer

Now, looking at what the new market gardeners were doing made me wonder if the 30 inch bed method would be useful to home growers. Remember they are growing a limited range of crops compared to a home grower. They’re looking at profitability which means salads more than staples, but we’re growing staples like potatoes and brassicas that are relatively cheap although they occupy the ground for quite some time.

Market growers find set bed sizes enable them to manage their growing more easily and use a range of standardised equipment. The benefit of beds like these to us gardeners is primarily psychological. Breaking up a plot into manageable areas for weeding and cultivating. It can be pretty daunting looking at an entire plot being overtaken by weeds.

Over the last couple of years I have discovered a way to cultivate this stony soil. My Merry Tiller will churn it up the soil regardless of the stones. By going over the soil with the tiller and then picking out the stones, a depth of workable soil can be made. I need to get a stone-free depth of at least 8 ins. (20 cm) to grow carrots for example.

Once rotavated and stone picked I can open up the compacted soil below with the fork, although this is still a far from easy task. Then put a layer of compost onto the surface and sow or plant away. 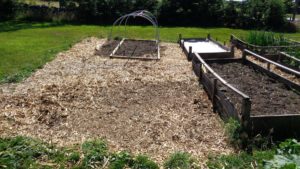 I’ve an area that’s been covered with the bark peelings in the veg field above the existing raised beds that I use for paths and in the chicken run, so I cleared some of that to put the new beds in. Then I realised that the ground is so dry at the moment that it’s unworkable. This is an experiment that will have to wait till after the drought breaks.

I’ll post the results of my trying some other market gardening methods next.